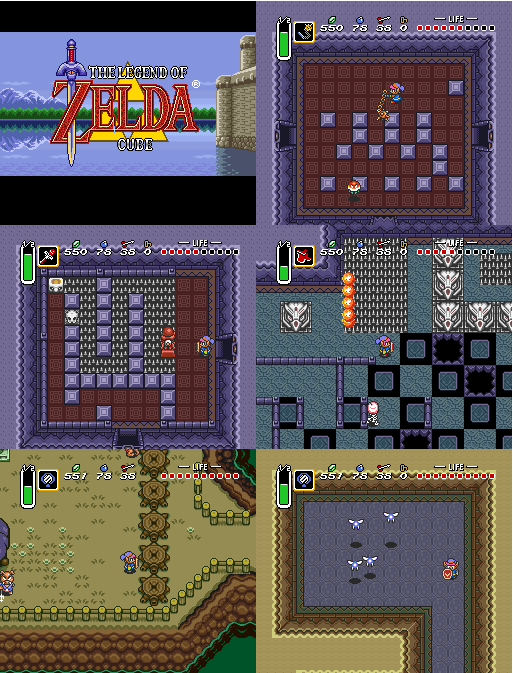 
Inspired by the movie CUBE, this hack was made as one giant dungeon, which has 10x10 Hyrule Magic rooms. Thus the entire game is one big dungeon, which you need to solve in one sitting and no deaths. Can you do it? Can you find the exit?

This is a short hack, which will sometimes force you to think hard before you will be able to progress, but for the most part is still on par with the difficulty of the original game, with hints when special tricks are needed to progress.

Note: Because of the sheer size of this dungeon with 100 rooms and because of the possibility of extensive backtracking, the progression was intentionally made to be linear and thus survival/puzzle oriented, rather than exploration oriented.

Has anyone ever crashed their computer from hacking alttp?

No, obviously. Computers crash for other reasons. Actually your Operating System crashes usually due to mistake in the code usually caused by unwated software. If this happens all you need to do is to reinstall Windows, or whatever you are using.

Best chances are Hyrule Magic will bug the rom, and the (bugged) Rom/game will crash in an emulator. That's the only thing you will see crashing.

I also heard players say, that hacks will fry your original SNES console (and this is why they use emulation), which is again a joke in my eyes. For if you were to see the code, you would realize how funny and untrue the statement is. Since the emulator is doing the same thing as the real system.

Also, I don't understand why so many people are affraid of unwanted software. There is for instance Acronis Image program which will scan your freshly installed Windows (or whatever you are using) and save the "image" of the entire OS into a file. If you make this file on a separate Partition, you can restore this image from BIOS. If you format the separated Partition to something exotic like FAT instead of NTSC no malitious software can get to it (specially if you do not put any exe files to this partition), nor into the BIOS obviously (that's why George Martin is using it when writing his GoT).

Thus you can restore the image into the main partition deleting the affected Operating System and replacing it with a fresh copy. This can be done in 17 minutes. Otherwise a manual fresh install with all main programs will take 2 hours, from which 40 minutes is enough for basic install.

If you truly want to be completely safe, you need to uplug from the internet or use BIOS tools like GM. One possibility is to also use 2 computers, one constantly unpluged from internet and with main files, and the other one to surf with no importaint files and with operating system restoring image file. But people are actually dumb enough to pay huge money for antiviruses, not knowing it will not help at all in some cases and will litteraly stuff up the RAM.

and another tip, for people who are afraid :
dig a hole in the ground, place yourself in,  stop breathing, wait for death....

I could report in as block puzzle liker #3 — with multi-movable blocks, these are now a lot more creative than what vanilla aLttP allows. In particular

Spoiler:
the blocks that leave behind more blocks

were a fun if initially intimidating touch.