I just tried and indeed it works. Strange in this video is however, that you have in the menu a questionmark instead of the shield... any explanations?

1) I didn't know pulling on the "mario" pictures in houses makes rupees come out. Is this pull for rupees sprite even in the game? When I opened hyrule magic I dont recall ever seeing a sprite there.

2) Did not know magic powder turned a chicken into a girl in that one house.

Seph, please put this chicken girl into your hack as it would be really cool.

that egg with the question mark on it. Hmmm, it looks as if that was done by a video editing program and not in the game. While the actual ? mark looks 16 bit, that egg graphic cannot be 16 bit, it has too many colors and is not pixelated as the other graphics are. who knows why the video author put some video overlay graphic on this video on that part, but i dont think its part of the zelda game.

I didn't know until recently that you could bring stuff like fish and bees to the salesman in town and he would give you stuff.

but did you also know that a chicken can be transformed into a woman as well?

Yes, this can be done in original Alttp and Parallel Worlds as well. In PW this person told you, what to do, to see the spikes under bridges in Saria's gardens, namely to deactivate bg2, which could be done with X+L (while X+R was Zelda's clue to deactivate bg1). If you press X+L in the house with this person in PW, you see a Smiley made out of spikes.

I just tried and indeed it works. Strange in this video is however, that you have in the menu a questionmark instead of the shield... any explanations?

That questionmark is probably a video edit, you can see the shield is actually under it, if you slow down the video.

Is this pull for rupees sprite even in the game?

Yes, in fact this sprite can be placed anywhere (outside and inside). It is a part of the original game= pull the thing outside of Turtle rock for rupees.

There is also a very interesting gimmick built in probably no one has ever discovered:
- if you defeated at least one enemy you will get green rupees when pulling on Mario's painting 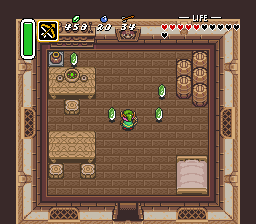 if you have defeated exactly 4 enemies you will either get 5 or 20 rupees:
- if you defeated 4 enemies without getting hit you will get 20 rupees 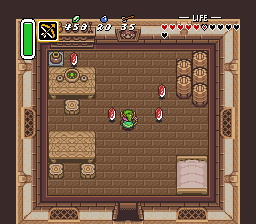 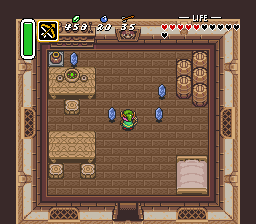 I knew that, I use that special chicken for something very important in my game