is there still that candy land area in your hack because if so why not put pop-tart cat in there!

Also Seph I have an idea that I want you to try out. You know how there is that railing in the mario 64 castle indoors, try setting its property to that of a cliff such that if link/conker runs or pushes against it he will eventually jump off of it. This way you can fall down from the top level to a lower level. Or jump off the balcony so to speak.

Try this and see if it looks okay.

Candyland was removed ages ago.

Can't add a jumping down railing in the castle because the tiles for it are within a tileset that don't have those tile properties. Besides there's nothing on the 2nd floor except that bowser note, so it's not worth it. 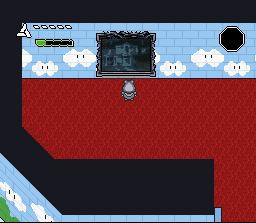 Will fix the top of the frame and align it properly to the entrance... and then five more paintings to go! 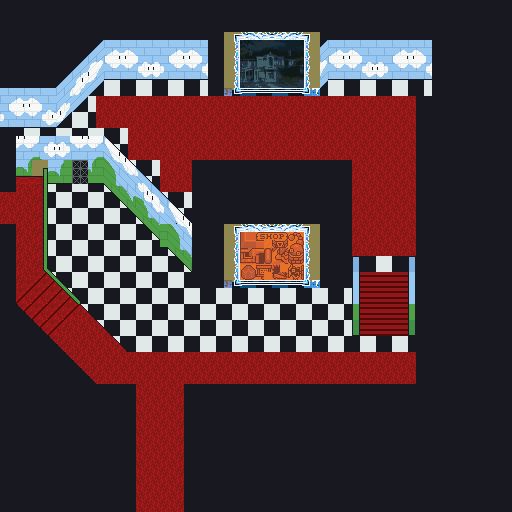 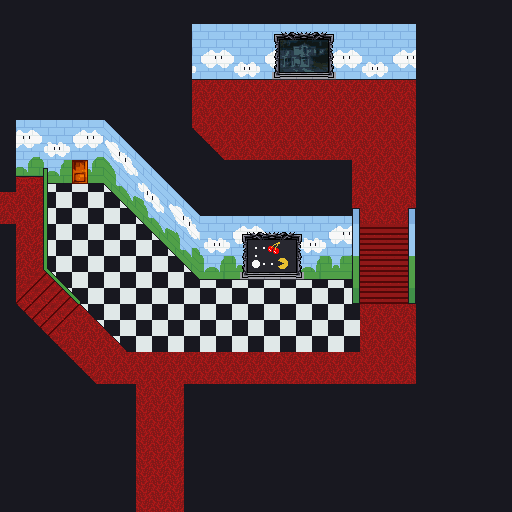 Some tiles are still incorrect ones, but they are barely noticeable so that area is acceptable enough in my eyes. Got so much of a headache figuring out all the tiles, so I'll leave it as such and proceed to the rest of the castle!

I really dare any romhackers to do a better job! I really do!

oh wow... much progress! Looks great!
As for the digable gound... can't you just specify the block type? Like 8 was water, 6 shallow water (I know this because I needed to turn the specific tiles into ice). Maybe this can be done via HM. Does Puzz know more? If not I think I surely can trace it and make an asm.

That's a very specific tile in HM, not a blocktype, so only one is digable... so I can't have both digable grass and sand without asm.

Red waterblocks it will be then. Only hope I can figure out how the palette changes work for those, I know I have notes for it somewhere.

As you see, the desert tiles use 02C8 (in the accumulator), but only tiles labeled with 0034 are digable. If I manipulate the label to 0034, you can dig 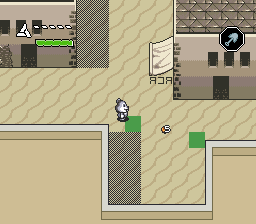 - here you go:
(note: it only makes normal sand digable. The house shadows e.g., not. If you wanna have more tiles, let me know. Also, I hope that HC pieces are digable in sand as well with this adjustment. needs to be checked.)

Conn made suggestion to SePH and then helped implement it. Take notes erobrocks!

Nice to see the hack wrapping up nicely.

I've made a tile to replace the green ones (when you dig), its block 704 (02C0). In case you wanna improve your own hack further! 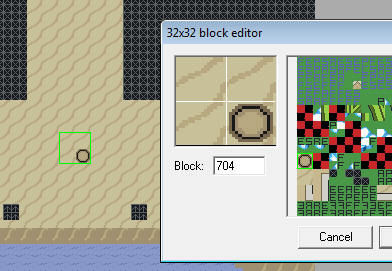 You mean instead the green one, tile 02C0 shall show up? Yes, can you send me the latest Rom where you already altered that tile?

Yes! Will send it at once and change the starting exit so you start in the desert areas, will also add a shovel in the 1st room chests for easier testing! 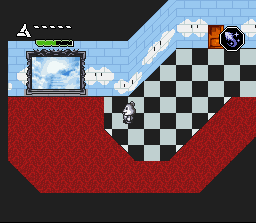 Only one remaining castle area left! 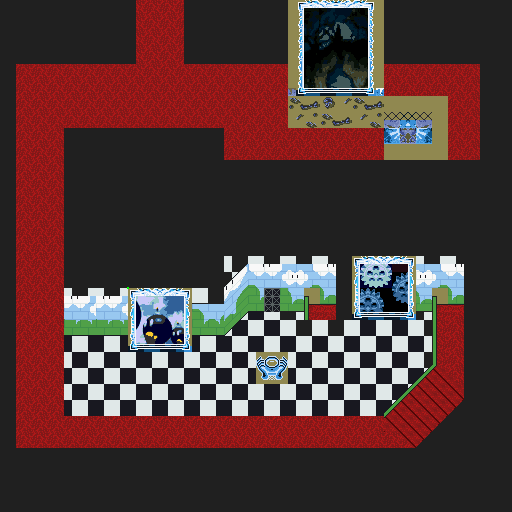 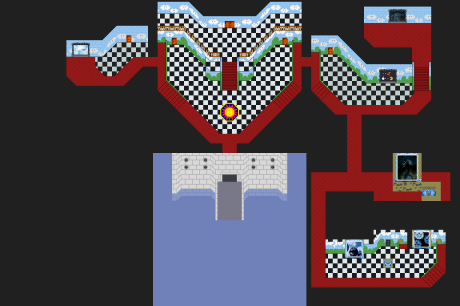 Will do the dark castle variation afterwards:

Ok, I await your Rom then. Tell me whether I shall change further grounds for digging as well, like the house shadows and or grounds in other areas.

Furthermore I also need to check space garden. I think it uses the same dig out tile. If it is green sourrounded, a second tile is needed here.

ok, already hacked it and seems to work. I also noticed that you already have the green bordered tile for space digging. I made precautions that the space tile is still green.
Test it!

Here you see how I dig the gate shadow (the house shadows one screen above are for some reasons not digable): 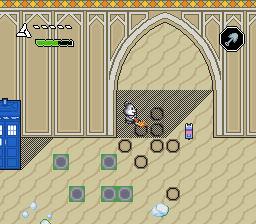 The reason why you can sometimes dig places where there are shadows and sometimes not is quite simple.

Some shadows are on the 2nd layer: 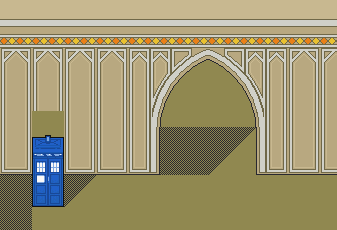 And others on the first layer: 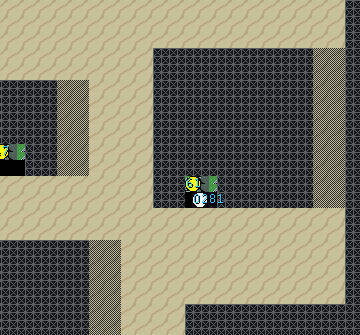 It's not an issue otherwise so I'll leave as such.

I'll test the space digging areas later when I'm doing that overworld. There's also one more place with grass, it is the simpsons area. I'll probably made a custom digging tile for that area too eventually.

I'll probably start by finishing my desert area once I'm done with my dark castle variation...with the normal castle being officially finished! 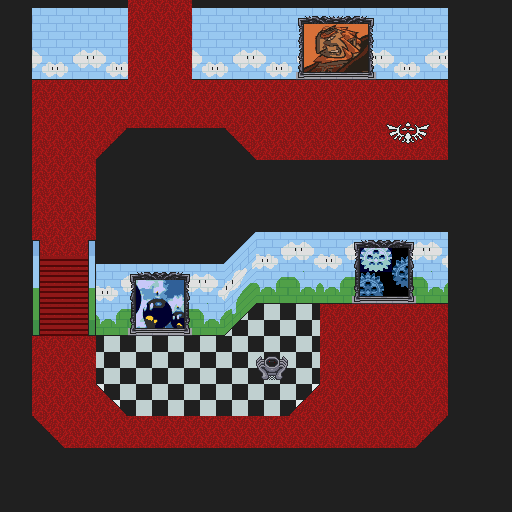 ^^Changed Ganon's painting as it was too big and gave it Ganon's Wind Waker pic instead for a more epic effect! Same sprite I used as the boss otherwise.

This is all really starting to look much epic! I'm much motivated finishing my overworlds this very months (guess you guys noticed that already)...and I know I've said that a million times, but july 2016 is the month I officially finish them for good! LOL 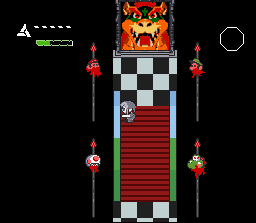 ^ you did one dead head for each character. yes, thats the way it should be. that way its not a joke and its more serious.

Also did you hear about the new matrix movies 4 and 5. apparently they are for real.

^^Nope! But that will surely be interesting if real! As much as hearing Prison Break is going to be back this fall! Can't wait for this too!

As title of the video says! There was a major bug if you moved two screens up and came back. The graphics wouldn't load correctly. Had to do some palettes switching and fixing some tilesets for it to work correctly. I'm pretty sure Conn should remember this since he reported a while back, if not, well no big deal...it's fixed now!! Onto fixing the rest of the desert areas!!

photo bucket isnt working so i made a video.

^^God damn photobucket and its maintenances!

Rupee sprites don't show up on overworlds, they only work in dungeons.

The runner sprite is already used. It's the white rabbit you need to follow in the beginning! There are no hallways in my castle where he would fit without running into walls. And I don't have space for sprites at all in the whole castle...due to the castle graphics being drawn in the spritesets.

The bowser painting area is very specific. It leads to Bowser after defeating Ganon, so don't think there's a need for a pit there. And in overworlds I don't have much events power compared to dungeons.

The star statue idea is pretty good. I'll see if I can cook something up. You are right on this one, that everyone who played LTTP will figure this one out pretty easily if they run into those hands.

Watch the video. This is part 2.

The grey frames ain't too bad, will probably leave as such, I've moved to other universes already and won't probably touch the castle ever again.

You can forget about the big one immediately, do you have any idea how many days it took Conn to get this right? Way too many man hours. Not going to go over all that stuff ever again. Really sorry and I'm sure Conn will more then agree too. He was very specific about it. It wouldn't work on the sun graphic either because of how it's made in HM. 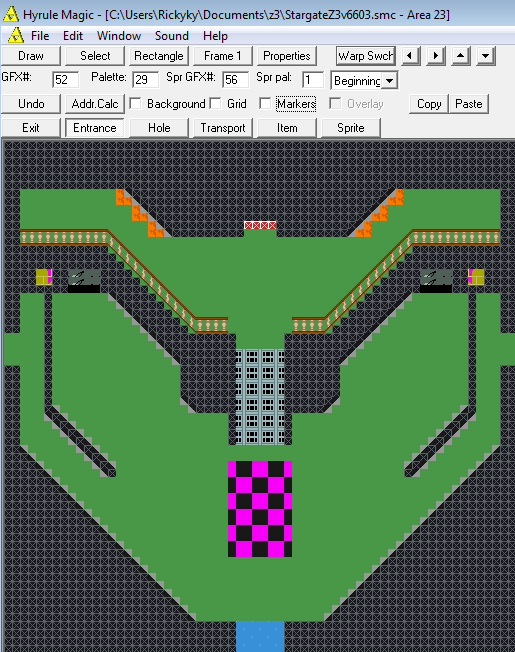 ^^That's the first layer of the castle. The sun dial ain't even on it, so it's not going to work. 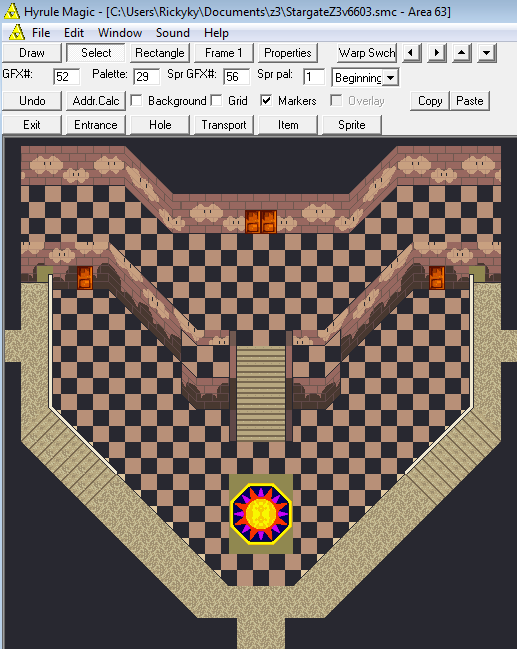 ^^Thats the 2nd layer. Aka the ''On top'' layer. While the bat thing works only on the first layer. The reason why the sun dial is there and not the other layer is that it has some tiles in its tileset which you can't walk on. Same reason why I can't add a jumping railing from the second floor. 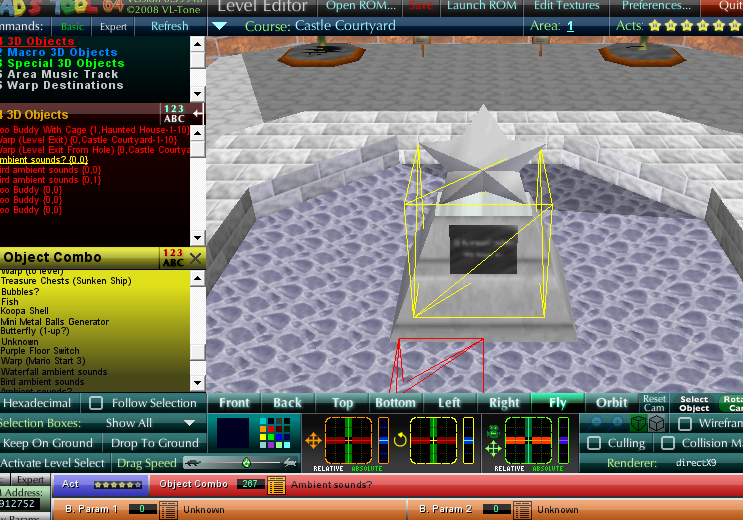 ^^Thats the only thing worth changing really...

ohem... well. you get an idea why I retire

but we already moved the batcave and it worked... do you move it again?

Well you have to also note that you and conn had close conversations regarding this that I may not have been aware of. So I didn't know how complicated it was.

If it was possible to make it crash through the sun graphic then that would have been awesome, but if not then its okay as it is.