Ah, didn't read erocks request. Awesome idea... Though I probably can code that if seph wishes, I'm sure however he makes something awesome out of the current location.

Btw: I recall sending you a rupee randomizer when pulling the casino tables. Did you apply that patch? Was months ago but I didn't get a feedback and considering the gigantic task it happens here and then that you can forget something

After seeing how hard this was Conn, I have a new found appreciation for your work.

This has to be harder than making a game from scratch.

Seph, you know you could have made this game (minus the copyrighted characters) in like a modern 2D game engine and then actually sell the darn thing on STEAM and probably make a decent amount of money off of it. But instead you make it for a abandoned platform.

May I ask why? Why use zelda 3 as a base to make your game from?

Here is my explanation of why I'm here doing this rather than somewhere else.

Its because I grew up playing Zelda 3 and wanted to make a new adventure using the same game engine. That's it really. If this Conker game were not using the Zelda 3 engine as a base I simply wouldn't even be here.

The game simply meant something important to me when I was young and now I'm trying to maybe recreate those same experiences or something like that, but now only as an adult. I think really I just wanted to do this because I just love the original game and want to see more of it. A new adventure for a game that I really like so to speak.

The fact that this is for super nintendo also has appeal to me as well. If it were just for PC and not a retro console I might not be feeling the same passion that I current do for it.

I also think its just cool to take something old and while working within restrictions make something new. Re-purposing current resources in new ways.

So yeah, if the conker game weren't really zelda 3 underneath, I probably wouldn't be here.

And why are there so few of us zelda 3 hackers. You would think more people would be into this, but apparently no. There are thousands of super mario world hackers, but like less than 50 zelda 3 hackers. I don't get it. I guess its just harder to do than mairo and the tools aren't as good.

If Hyrule Magic would be much more user friendly and not had so much bugs in it, there would have thousands of Zelda 3 hacks...and I surely wouldn't be hacking this game.

Why did I started hacking Zelda 3? Because pretty much nobody else was doing anything with it, with a few exceptional cases. I'd rather make a full hack of something that hasn't been done than something that has been OVERdone.

Besides I'd rather have three good Zelda 3 hacks to play then thousands of Super Mario hacks.

SMWCentral is clusterfuck. Too much hacks and people there, so little interest for me there.

Conn wrote:Btw: I recall sending you a rupee randomizer when pulling the casino tables. Did you apply that patch? Was months ago but I didn't get a feedback and considering the gigantic task it happens here and then that you can forget something

Yup, already applied. More free money for you and Erock!

I have good news and bad news.

The good news is that the overworlds might be completed in less then two days.

The bad news is that I have no more free small tiles to build my overworlds.

What this means is that'll begin cutting stuff originally planned to insert.

The delorean won't be in the game because quite frankly it takes way too many small tiles and I would have to remove many other area graphics.

So when I remove Conker's girlfriend on the title screen, I'll also remove the delorean.

Areas left to finish are the Duck Cunt area which is still missing part of the nes console, the tv and the cart. And other areas such as the desert which is missing some beach corners tiles and the intro "real world " areas featuring Neo which is missing some details. There's also the third text adventure which is missing all its text... so in order to insert those I'll probably remove some underwater areas graphics which takes much space and even then I doubt that will be enough to insert everything.

This all means I might cut down the Royal Hyrulian Weed factory as well and probably just add the archery  game in its place instead.

This alsoeans I'll begin doing my own playtests durong my vacation. If all goes well I'll begin the internal beta with us mods and admins in advance of the other automn beta to fix most bugs in advance. 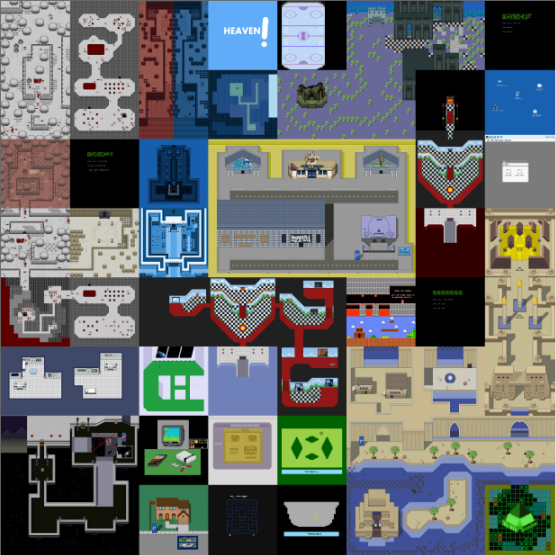 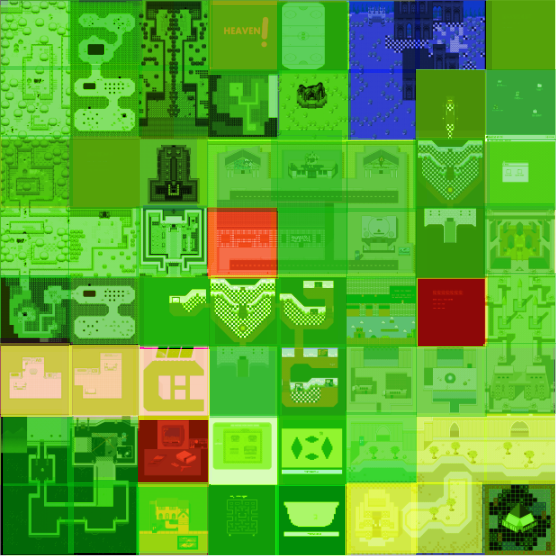 
Will redo all the overworld sprites since...well after editing overworlds for a long time, they eventually get corrupted and spawn all over the place.

Will also need to add one item (bombable wall) on that Bob-omb painting, since those those were getting copied all over the place.

^^Those always need to be done last after completing an overworld anyways.

Won't probably do a 2nd quest either and focus all my energies on the main quest and all five endings...!

^^Five different endings is enough for players to actually make them replay the game several times. The Ganon superboss is going to be super hidden through and you will need to find all items to find him, the golden squirrel tail being the last item you'll get well hidden within' the dev's hideout. There's going to have fifteen +++ hours of gameplay for averages players if they wanna find every little secret. Easily!

Soooooo....no need for a second quest. Going to be a pain in the ass adding sprites in all the different parts otherwise when they get corrupted all the time! 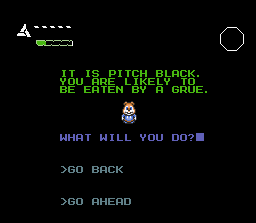 ^^text adventure 3 done! came up with a zork reference, fits well with the premise of that area.

Will there be any overlays on the overworld? For example, in the original alttp, the forest had an overlay and you guys did an overlay in PW with the snow world.

You could do an overlay of like animated bubbles in the underwater area where you collect the harp. Or maybe something else.

The only way would be hdma. But...pretty much nobody knows hdma, so... 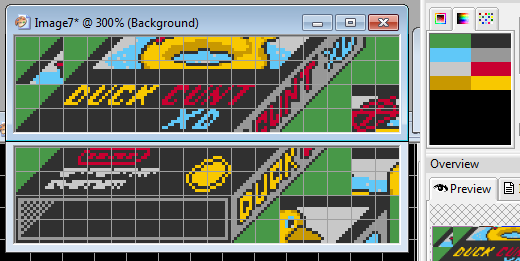 ^^Next order of business! 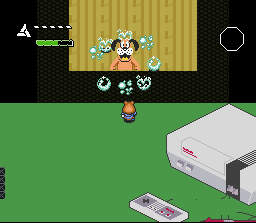 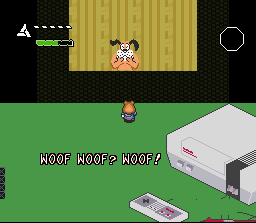 Much like the fake cart, I'm going to change the game background to a pool with an inflatable duck and the dog's going to come from the water!

Will finish this either later tonight when I'm back home or tomorrow for sure!

After seven and a half year, SePH is finally happy with his overworlds and can finish other tasks! 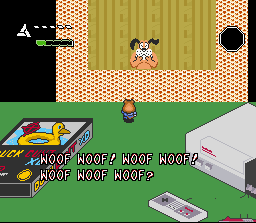 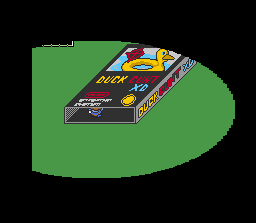 ^^Only when it's finished! 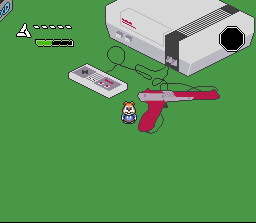 ^^Now will do the tv, game background and other missing details such as the ground/table etc...

what about the song for this area. maybe something like this

Trovsky already made a song for this area and it fits well enough.

TV and fake game background is done, ready to be inserted! 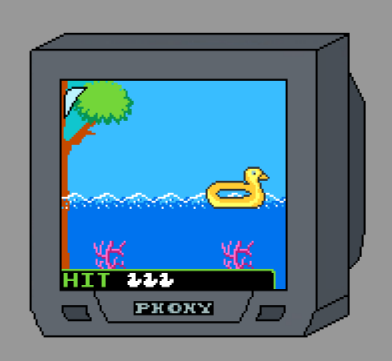 ^^My own hack of Duck Hunt...a hack within a hack XD 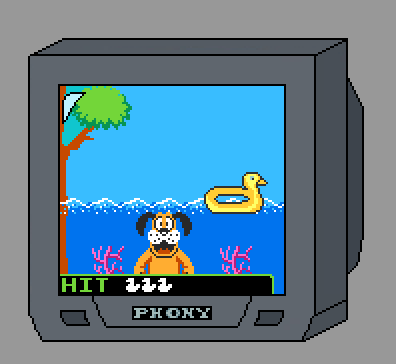 ^^When the dog appears on screen, it'll look like this!

This is looking good seph. I like the Duck Cunt game (lol) and the Phony instead of Sony is well placed.

What will the whirl pool be translated into from the original game? Will you leave it just blank/non existant?

Thanks, I will. It's going to be the last overworld area in the whole game. So I gave it all I got. I'm very happy how it turned out and it's probably one of my favorite areas. After that the overworlds will be finalized. If there's still some tiles space left, I'll add the ''Royal Hyrulian Weed Factory'' in the modern world and that will be it. Overworlds completed before I even start my next romhacking vacation in two more days of work (2morrow and the day after). Will go to sleep soon so will finish it 2morrow after work.

The whirlpool gfx tile will stay blank, but on the 2nd overworld layer it'll always be something else. There are a total of eight warps, each leading to a different overworld. There are two of the three text adventure areas with warping words (1/8 and 2/8), the mario nes one will warp you after scrolling all the way through (3/8), the stargate warp will be...well an animated stargate...(4/8), the two abstergo cryo labs (the real world where you start the game as neo) warps will be animus machines (5/8 and 6/8). There is one in the desert where you'll need to go underwater in order to find the stargate, it's going to be an animated water gfx (7/8) and the last one will link the two atari areas together with an animated tile (8/8).

^^So eight whirlpools but they are always working one way only, so eight possible different locations. In the original game they were working both ways so they had four possible locations only.

You know whats so funny, in the original game I almost never used those whirl pools.

Really for the original game they are only useful if you dont have the bird ability. Also you have to memorize which whirlpool takes you to what location and I never memorized those.

Really for the original game they are only useful if you dont have the bird ability. Also you have to memorize which whirlpool takes you to what location and I never memorized those.

Same here. They are practically worthless since you already have the boots by the time you have access to them. It doesn't take much time to get anywhere when you run and the whirlpools can't take you to the mountain or anywhere exclusive.

^ I know, fuck those whirlpools, they didn't do shit for us.

Also how does one explain the logic involved in whirlpools? If you get sucked into a whirlpool you should die, not be teleported to another whirlpool.

If they were used a transportation device they people would be throwing all kinds of shit in there too. Like lets say you bought some groceries from the store. Why carry those bastards home. So instead just throw them into the whirlpool and save some time and energy.

Also if the whirlpools really work both ways how does the whirlpool know to spit you out or to suck you in? How can those two functions work simultaneously?

Its like a one way road that you can travel both ways, but again how does the whirlpool know which way you want to travel. Oh I forgot, (facepalm) it just uses magic. duh.

Whirlpools could be translated into wormholes actually...cause thats how they work, they transport you from one place to the other and vice versa.

Jaqen wrote:Whirlpools could be translated into wormholes actually...cause thats how they work, they transport you from one place to the other and vice versa.

Oh, okay. So they're magic.