NO. They are a theory!

The same could be said with blackholes....do they kill us as soon as we cross the event horizon or we get transported to another place? I don't know...I have yet to meet one!

I believe King Zora is telling you something about whirlpools when you get the flippers.
Something like "I'll let you use my water ways" or something...so it could actually be Zora underwater tunnels (if we want it to make some sense).

Honestly I thought black holes just sent you to hell.

I wouldn't want to go into a black hole. Even if they come out somewhere else the other side is going to be littered with all sorts of super hot, likely incredibly radioactive garbage that got pulled in before you did.

Oh, BTW, don't forget that the Juno probe is finally going to make it to Jupiter almost exactly 2 days from now. I heard about it a few weeks before it launched so I personally have been waiting about 5 years for this.

I dont think a black hole would kill you instantly, but you'd rather experience a slow induced death with your atoms slowly being changed. But then again this only a theory, no one lived to see one, so there only exists works of fiction.

Didnt knew about this Juno mission! This is good reading material.

It arrives just in time for Independance Day, what good planning by the NASA. Hopefully we'll get hd pics of the planet and its moons like IO who has massive volcanic activity. If I recall there was to do date only one mission to that planet and I was about ten years old. About time. Hopefully we'll get a better understanding of its planet core as well.

I dont think a black hole would kill you instantly, but you'd rather experience a slow induced death with your atoms slowly being changed. But then again this only a theory, no one lived to see one, so there only exists works of fiction.

I imagine it would be very slow. Isn't time supposed to slow way down amidst the presence of such intense gravity?

It arrives just in time for Independance Day, what good planning by the NASA. Hopefully we'll get hd pics of the planet and its moons like IO who has massive volcanic activity. If I recall there was to do date only one mission to that planet and I was about ten years old. About time. Hopefully we'll get a better understanding of its planet core as well.

For sure. I think most of what we know about Jupiter comes from missions that were just passing by it on the way to something else years and years ago. This should be amazing.

You are right! Time slows down. It reminds me of this classic Stargate SG-1 episode!

Meanwhile here's how my Duck Cunt area shall look like upon finishing it: 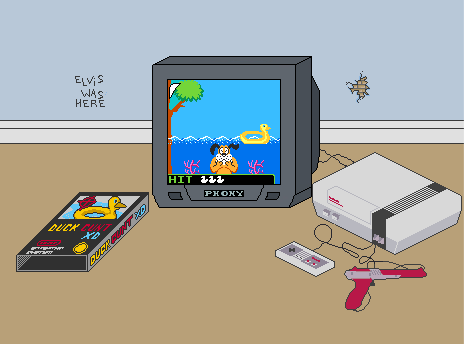 After sometime decided to finally put the tv, console and cart directly on the ground due to lack of tiles and palettes!

This is the best thing I could come up with, hopefully it stills look good!

I'll have to reduce colors a bit so I can insert the ground and wall palettes somewhere in there too: 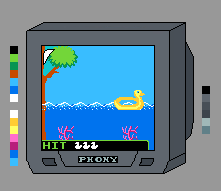 ^^Time to finish this up and call it a day! 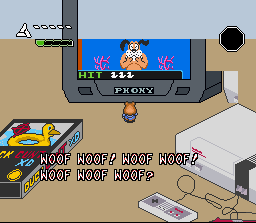 ^^Getting somewhere...but out of small tiles again! So going to remove other area graphics which takes much space for a chance to finish this up.

It's amazing that all 3700 overworld tiles are brand new!

I do have a question though, in super mairo world hacking it is possible to insert extra graphics, in other words more graphics than were originally in the original game.

Why isn't this also possible with zelda 3 hacking? Why can't we hack the game to allow for more graphics?

Also the perspective of the tv and nes is kind of off, but its a hack so yeah.

Also the perspective of the tv and nes is kind of off, but its a hack so yeah.

But it's a giant TV and Nintendo in a Zelda game. It's so cool.

I always hated that dog. I'd be wanting to throw something through the screen to get him back for all the times he laughed at me. Too bad he can't be a boss. I'd love to slaughter him. GRR.

P.S. I already expended the graphics in this game, but there is still a limit. There are more graphics sets then in lttp!

Here's proof that I've expended the graphics sets beyond the original game:

^^On the left is my decompressed graphics and on the right ALTTP original graphics! Pretty much everything was changed. Then after scrolling through everything I opened my rom directly to show you all the extra graphics loaded at the end of the rom... the link to the past rom barely makes it to 1mb, but my rom is full of graphics all the way to 4mb...if this isn't expanded graphics, I wonder what this is

I have no more intentions of adding new graphics anyway.

If the conker game is popular enough someone will probably make an actual fan game out of the fictional duck cunt game you created.

In fact they might even do a homebrew on the nes with the zapper. seriously you have no clue what people will do.

Let's hope so!
I know SunGod would love to kill that dog bastard!

I was just thinking, did you know that the time that it has taken to make your game seph is about the length of time of the snes's entire life span.

Nintendo: We are proud to release our newest console, the SNES

Seph: Oh, boy I can't wait to make a game for that console.

Nintendo: We are now proud to present our newest console, the Nintendo 64.

Seph: Oh crap, hey Nintendo just give me a little more time with my game.

Yeah but don't forget most teams are composed of more than a hundred developers!

Started my project in january 2009 for reference

Funny thing is that some studios like Blizzard still have more than 300 developers and their games still take an average of eight to ten years to release!

Seph just to let you know, if you watch my very early videos of my designs and you watch my latest ones you can notice that my voice has changed over the years while working on this game.

That is a long freaking time man. Seph please do some good progress since I'm getting to be too old after doing this for all these years.

Yeah I've noticed that too in your early videos from 2008!

Game will release this year, don't worry about that fact!

We'll all get that game out of our minds very soon

^^Short, yet effective reminder of what was PARALLEL WORLDS!

You'll get a key there, not an heart piece and I might add another floor/room. You'll first read the monologue tile and then you'll get all those beamos, spikes, floortiles and shooters in another room along the small key. 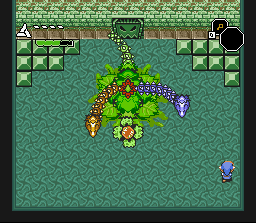 ^^Finally got around to adding this boss missing graphics animations! 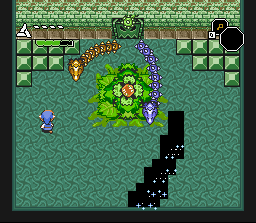 ^^Will need to add ice graphics into my tileset so the ice gfx loads properly... 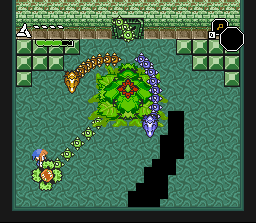 ^^And will also need to figure out why his shell doesn't move like it does in the original...must be something I did wrong! 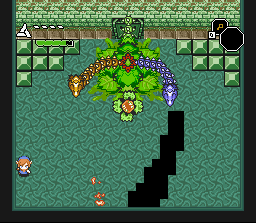 Will most likely create a new dungeon tileset for the whole Triforce Shrine to match the egyptian setting of it's golden pyramid, so will carefully add the ice tiles when I also do this! 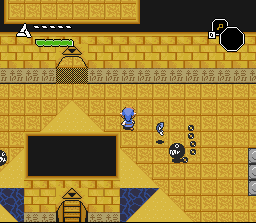 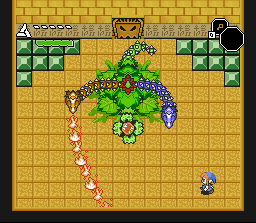 ^^Alright need to edit a few more palettes and insert those pesky ice tiles for the boss, but already feels the way I want it to be!

I think you did a great job with the new graphics on the bosses. Its amazing what just new graphics can do. It almost makes them feel like they are custom coded.

By the way, was anyone able to decipher what Resphaper's asm code files did?

Will fix the blocks palette, the wall behind the boss and its shell so they are not set in-front...laterz

Still have to finish that dungeon and link it to the power and courage paths anyway (sith and jedi paths). So still much work to do.

Oh and yeah, obviously forgot to add his monologue!

Don't think anyone did anything with Reshaper's custom enemies. But Euclid does has experience tweaking the already existing ones, so no big deal.

^^Wasn't a fan of LTTP original's icy graphic tiles for that boss...

^^...so I've made my own custom ones based on the icy tiles of the ice dungeon! 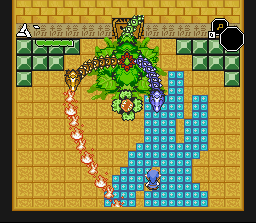 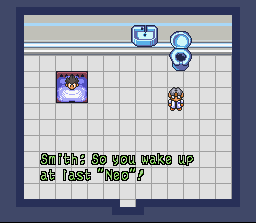 ^^Every prisoner needs at least a bed, a water faucet and a toilet!

^^That toilet gave me a brilliant idea...

You know those water ponds where you throw items in the water and you get an item upgrade?

[Name]£ A mysterious
toilet stands
in front of me.
Narrator£ You wanna
throw something in it?
-Are you mad? No way!
-Hell yes!!!!