I've been a musician for close to 25 years and I have a better understanding of music theory than the majority of people who make music for a living. I am even well versed in composing music via computer programs. Despite that, I still find Hyrule Magic's music editor to be almost impossible to make any "calculated" use of. I'll give you a perfect example:

I want to alter most of the songs in the game, but what I want to accomplish is nothing drastic. It couldn't be simpler. All I want to do, is change the notes to alter each song's tonality. So if I'm looking at a C Dominant 7th chord, I might want to change it to a diminished or augmented chord to give the songs a creepy or depressing vibe. I'm not adding notes, I'm not changing rhythms. No extra voices, no additional patterns. All I want to do is replace one note with another, but when I open Hyrule Magic's "music editor" I see this: 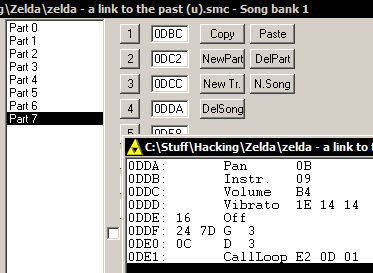 That's not a music editor, that's an assembler trying to pass itself off as a music editor. When I open one of these songs up in HM, other than the note values, there is almost nothing else that is recognizable as a song or as a part of a song. Trying to alter a song that juggles up to 8 tracks in this fashion is an exercise in futility. A working knowledge of music theory and experience tracking music with computer programs is not enough (when it should be ALL that is enough). You must understand music theory AND LEARN HOW TO PROGRAM MUSIC IN THIS GAME'S SPECIFIC FORMAT. That's like trying to say something in another language, but having to translate your message through 2-3 other languages first. It's idiotic and it couldn't possibly be any less intuitive. I almost think it would be easier to edit the music in this game with a hex editor, using a table file!!!

That is completely unacceptable and if you want to know what a real music editor looks like that is almost tailor-fit for SNES music, open an IT file up in a program like OpenMPT. That is how you create sample driven music that is centered around patterns/loops.

EDIT: I have learned how to use this editor, it just sucks that much. If it is easier to write a new song than to make the most minor changes possible to an existing song then you know you editor is F@#%ED.

I'm looking at Hyrule Magic and and changing one thing results in a major amount in the ROM. One byte change in the editor changes over 100 bytes for no reason.

Yeah, the first time I made a change to make observations in hex all I did was change one note and HM felt the need to shift a bunch of data even though no additional data was necessary. I had also already made the initial HM save. Subsequent changes revealed something more realistic and rational.

But yeah, continuing what I said earlier, the music editor in HM is pretty much useless since (IMO) the whole purpose of an editor is to make the process of altering content more accessible than trying to accomplish the same thing with a hex editor. HM fails at this because I know music and I know music editors, but this is still like reading Klingon much of the time. It takes an inordinate amount of effort to even know which part of the song I am editing.

This is how you do it.

Too bad we don't know the person who made these 2 videos, since he probably is the only one who knows how to do this.

I once made a tutorial on this:
https://www.zeldix.net/t154-the-music-tinkering-thread
first post is the link.

But I remember it was incredible hard to edit the music, therefore I started (and luckily succeeded) my msu1 pioneer work.