In this design the idea is that the player cannot hit the pegswitch unless they have the hammer and can defeat the turtle shell. The pegswitch would need to be hit an order to access some other part of the dungeon.

So this could possibly be used in the hammer dungeon. At first the player sees this and cannot access the pegswtich, but later after the hammer is required then they can gain access to other parts of the dungeon that were once blocked. 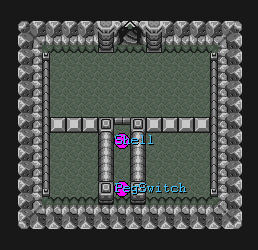 [edit] finally got around to testing this. yes you can throw bombs onto the switch. So if its used just make the path longer to avoid this. Also its possible to shoot an arrow past the turtle, but other than that the design works.

Or just make the distance longer that goes to the pegswitch by extending those high walls. 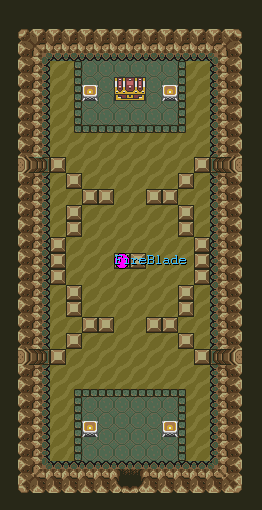 Just want to point out that you can indeed make it through on the right side without getting hurt in that example. You are just walking slower when you have your sword out =).

Here is a design where the player walks into the room from the north door with the goal of going through the south door. The south door will only open if the enemies are cleared.

When the player first walks in they notice a beamos, but thankfully the high walls block the laser beams. The whole point here is that you can defeat the monsters by mostly hiding behind the high walls and avoid getting shot at until the monsters have been defeated.

The player could go to straight for the enemies, but they run the risk of getting zapped by the beamos. So the idea is that the high walls encourage a bit of strategy. 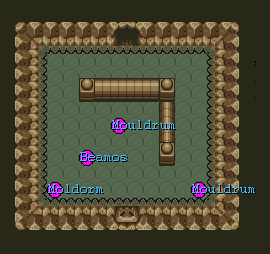 @Tompala, since the level was glitched I didn't notice that. lol I'm sure it could still be used though.

The description is in the video once it finishes uploading. 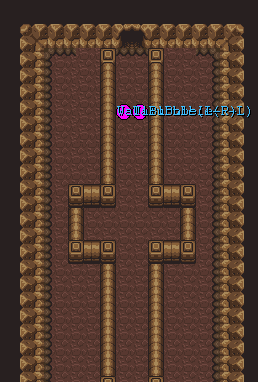 In this design the player walks into the room from the door on the left and sees the wonderful chest down below on the lower floor. The first thought that comes to mind is to jump down to the lower floor however, after jumping the player soon realizes that they cannot access the chest so they are forced to warp to someone else.

Now after coming back to the same location later the player sees an alternative method. Using the hookshot to the brick on the right now allows the player to jump off that platform and access the chest.

This room may be slightly too big for the hookshot range so if it is then just make the room smaller so the hookshot will reach. 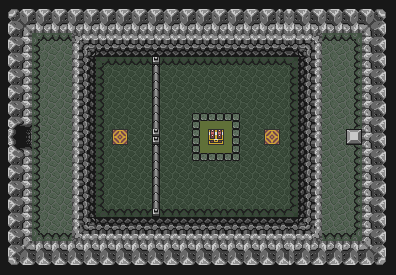 While having only 1 heart and spike boarders may seem more challenging I think the best way to approach the game is just to make it fun and interesting. True they could just take the damage and get hit because they will have lots of hearts, but its more fun to play by maneuvering around the sparks and trying to not get hit.

Here is another design with the wall bubble sprite. Depending on when the player chooses to lift the rock they will either get hit or avoid getting hit. 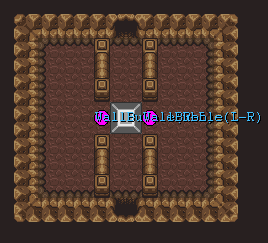 Are you sure you do not want to make a casting for the new Star Wars movies as Watto with your voice?

I have actually tried to use some screen recording programs, but usually one of the following happens:

A) I can't understand how to use the program

C) When I use the program I get major slowdown on my computer and its not worth it.

In this deign the wall bubbles force the player to move around the middle rectangle in the center of the room. The path the player has to walk in is just big enough to allow for them to move freely yet still be subjected to the wall bubble.

Note that all the bubbles are traveling in the same direction and thus are all the same type of sprite. 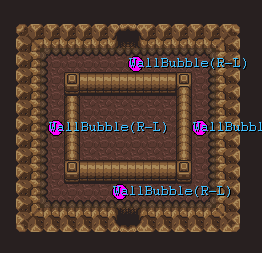 An idea I got from this... A puzzle where you need to transport the bubble through a maze, by lifting the correct pots and move blocks for it to go the right path. And in the end you need to take damage from the enemy in order to skip past something you need to be invincible to go through. Or that you only have 1 heart and need to go through spikes, which does 1 heart damage. But by taking damage from the bubble you can walk through the spike section.

Juts an idea that I think would be cool =)

I'm been thinking of an idea like this too, but with pegs and peg switches instead. The problem is that when you move the bubble to the desired location you then have to "use" it for something. In your case you move it an order to take damage to pass through something.

I think another way of looking at this idea is to turn the idea on its head. Have the bubble in your path so that you will take damage and so to avoid damage you then move it to another location. 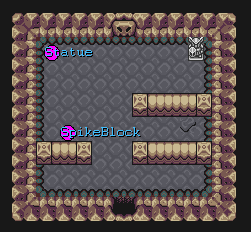 Here is a design where the player basically just has to avoid the wall bubbles by picking the right timing they choose to enter the paths. Notice how the sprites are used (cw vs ccw). 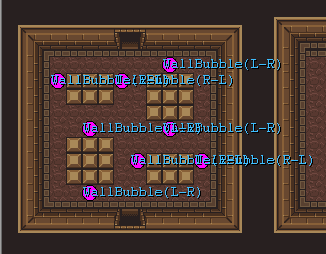 However, once the lanterns are lit then the blue tiles appear and the player sees that they can hookshot over and stand there. Then they realize they can push the 1 time pushable blocks and get to the warp. Instead of a warp it could easily be something else such as a door.

In this one the player has to light lanterns an order to make the chest appear. However, the order in which the player lights the torches matter. If the left lantern is lit first then it is impossible to get the chest. The correct order is to light the one on the right then go inside the inner area and light the one on the left then get the chest and since they are now trapped use the warp to exit. 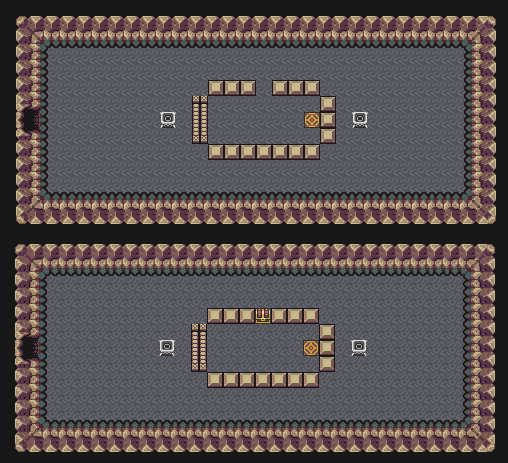 In this room the player can enter from either direction (top or bottom). If they enter and the pegs are down the wall bubbles are going around the pathway too rapidly so the player must take a hit (if they dont have a powerup to avoid it).

If the pegs are up then they get the "good room" where the wall bubbles will connect to the other walls. If the pegs are down its the "bad room" and they must go back and hit a previous peg switch or take damage or use magic to avoid getting hit.

Note the wall bubbles on each block are actually going in opposite directions with respect to the other. This is so players can't slip by easily. 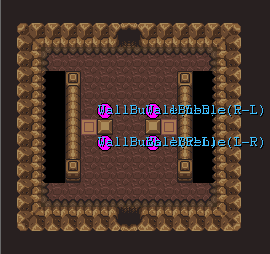 Those black pits allow the wall bubbles to go by, but at the same time not the player.

Soon the player realizes that they are trapped in the enclosure that they warped into. At first they panic. What the Fu*K?!?!? Then they eventually find a block that can be pushed which makes the chest appear. 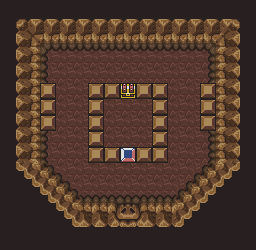 Opening the chest makes the pits appear and thus frees the player from the enclosure. Now they have the choice of falling down to another room or hookshotting to the blocks to exit through the door. The door should be open and not closed like in the pic. 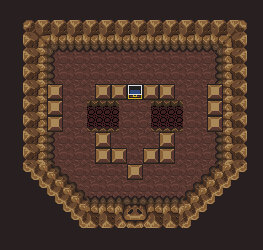 In this one the player walks into the room and sees the chest yet they cannot get to the chest because of the pit. Thankfully there is a star switch which makes the pit go away so they can get the chest after all.

This one is super easy, but again its not about being hard its about having fun playing a game. 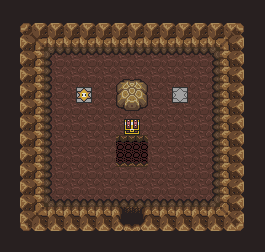 When I started zelda hacking I originally thought that I didn't have anything to offer because I didn't know ASM or programming related things. Little did I know that you can just design stuff with nothing more than ideas.

The player walks into the room from the left door and sees a heart container on the other side of the pit.

The heart container really can be anything as long as the player can't hookshot at it to get it.

So after exploring a little bit they eventually push the push-able block. 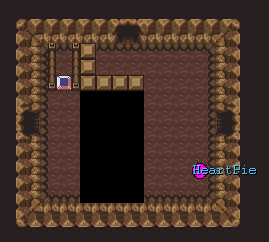 When the block is pushed chests appear, but these chests aren't meant to be opened, but rather act as a solid object to latch onto to cross the pit. 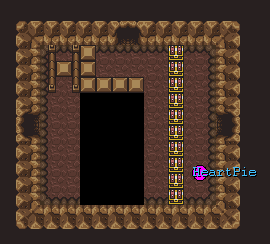 Since seeing a large column of chests would look rather odd they can be disguised with a graphics change such as a regular block.

The chests can never be opened since you have to open them from the front and no such front position is available. 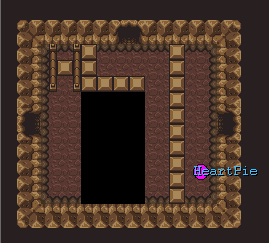 Using this in the game gives it an almost newly added feature. Now walls of blocks can appear out of nowhere by the push of a movable block. No player would ever know that they are really chests either since the graphic is of a block.

After the player seeing the new "wall" of blocks now they can hookshot over to the other side yet they still can't get the heart piece. Only later after exploring further in the dungeon do they get to enter the door on the right which allows them this. Or maybe its possible to enter the north door and somehow the "chests" reset because they were never opened and then you can get the heart. I would need to test this to be sure.

The feature "move block for chest" will generally allow only one such chest and if you don't open it, the chest will disappear when you leave the room.

If you change the gfx of the chest to the block, then all chests in the game will look like blocks.

Puzzledude wrote:The feature "move block for chest" will generally allow only one such chest and if you don't open it, the chest will disappear when you leave the room.

If you change the gfx of the chest to the block, then all chests in the game will look like blocks.

In sephs video here you can see that he made it so that many chests appear at once when the block is moved.

I have also seen seph disguise chests with other graphics. In the resident evil dungeon once chest is actually part of a statue. (unless he is hiding that chest graphic under other graphics)

In the above design if you dont want the chests to disappear by walking into another room just make the door automatically shut on the player once they have walked out of the "appear many chests room" so that they cannot cheat the gimmick.

Yes, the multiple chests can appear, but it will surely cause bugs, if you open less than all chests (and at least one) and leave the room. When you return, the previously unopened chests will either be bugged or invisible.

Your idea is however doable. Replace the vertical line of chests with the non-hookshotable objects (non dependent of the block-move) and just one place is a chest.

Here the player enters the room from the left and notices that they can't get to the door on the right because the pit gaps are too big to cross.

Now that the blocks are gone and out of the way the player can now hookshot across and get to the door on the right.

This room is really only set up for a 1 way type of passage. 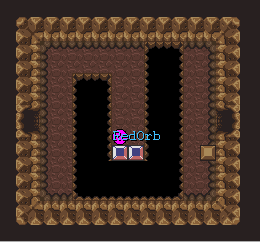