Live-A-Live (now out of beta)

Live-A-Live (now out of beta)

Tested through many chapters.

Coincidentally I started on the audio for this yesterday. Hopefully it'll be done today.

Mostly done. A few tracks remain that haven't been found on the sheet. Here's the vast majority of what the remake soundtrack provides, anyway: https://mega.nz/file/pvog0LDZ#NCkHxawge1PTIYKa5cwXG_39PiWNJTmXTD4_opinLLg

They're just numbered, also. I wasn't sure what the naming scheme of your patch would be.

I think it's gonna be lal_msu just to match nicely with many other patches.  Thanks for getting them all done so quickly! It'll make testing + development much more pleasant!


anyways, if Versus is the only thing remaining to be found + mapped from the new soundtrack, it should be pretty quickly figured out.

I haven't got the list in front of me now, but apart from "Versus" and from what my addled brain can remember... Dangerous Bar and Prehistoric Night were also available. There are a couple of track names I don't recognise, so it's possible Zophar has more than what my SPC pack has, but I'll double check everything again tomorrow.

a lot of what's missing seems like ambient sounds that may not be "music" per se.. or just short SFX clips that the SPC rippers ripped as songs..

added an early alpha version to the first post.

Cubear wrote:a lot of what's missing seems like ambient sounds that may not be "music" per se.

I reckon so. I found a nice gong sound for track 47 that's similar to the remake, so I'll look for a bell for track 48. I don't know of any other Squaresoft games that used that voice sample for the ident on boot. It'd be nice to find a higher quality version of that. I've got everything I can get apart from those.

Here are the 10 remaining available tracks that are missing from the first link.

That should be about it.

Relikk wrote: I don't know of any other Squaresoft games that used that voice sample for the ident on boot. It'd be nice to find a higher quality version of that.

As far as I know it was only used in Live-A-Live so chances of getting anything better are close to nil.

I've updated the patch and it is now entering beta.
Control codes have been implemented for fade in/out and track stops.

I haven't played far into the game, and some tracks have not yet been located, but there is fallback in the patch.

if you have the ability to, you can check ram at $14E9 to see which SPC value was called last.

The latest version doesn't work well with this translation patch. The MSU1 patch is undoubtedly for the original Japanese base ROM, but there didn't appear to be any problems with the previous version and the translation patch.

alright, let me take a look at this and i'll shift some stuff around.

Edit: yeah, an error check I put in prevented it from working. Removed said check and reuploaded.

Thanks. Found some issues during the Kung-Fu scenario.

During the ending, and as shown in the YouTube video below from the timestamp. The music fades out as the character walks towards the edge of the mountain top, but it changes to a new track when the music comes back in.

With the MSU version the music comes back in too early and continues with the same track, but it then switches to the next track in the same place the original game does.

The next issue is after a battle when you level up. When the screen transitions back to the overworld the previous track plays from the start for a quarter of a second. This wasn't happening with the first patch, also.

I've attached some save states.

probably both the same issue. I'll look into it once I've finished off cotton 100% (likely another hour or so)

this is shaping up to be a monster. those were in fact two separate issues.

I'm also working on the western chapter now, which broke some with the changes made to fix the kung-fu chapter.
Ihe solution at this point is to add MSU1 tracks to some of the sfx as the problem arises when the same msu1 track is called repeatedly.

tomorrow i'll look into correcting fade lengths across the board (they're about twice as fast as they should be) and removing the need for SFX tracks.

Brought fades to within a 2 frame window of the native code.
Implemented a slow fade catch to stop specific fades from being instant.

Some issues I picked up this morning.

After exiting the menu the music cuts out until a track change is called.

The same level up issue still lingers, although it was only happening in the final room of the Kung-Fu scenario (I'm not sure if it happens across the board in others, I forgot to check), but it wasn't happening anywhere else leading up to the final boss area. Video shows a level up, then a situation on the same fight where there's no level up.

Sometimes fades don't ramp up, and they stay at very low volumes until something forces the volume to raise. There was an issue somewhere in the Kung-Fu scenario where the music was low for about 20 seconds then a dialogue changed it to full volume. I started the Western scenario and right at the start when the sheriff enters the bar the music stays at a very low volume. The video shows that, and a comparison of the same track a little later on at full volume.

as far as issue 3 there, that's intended. the initial scene keeps the music at volume #$40 and my patch matches. 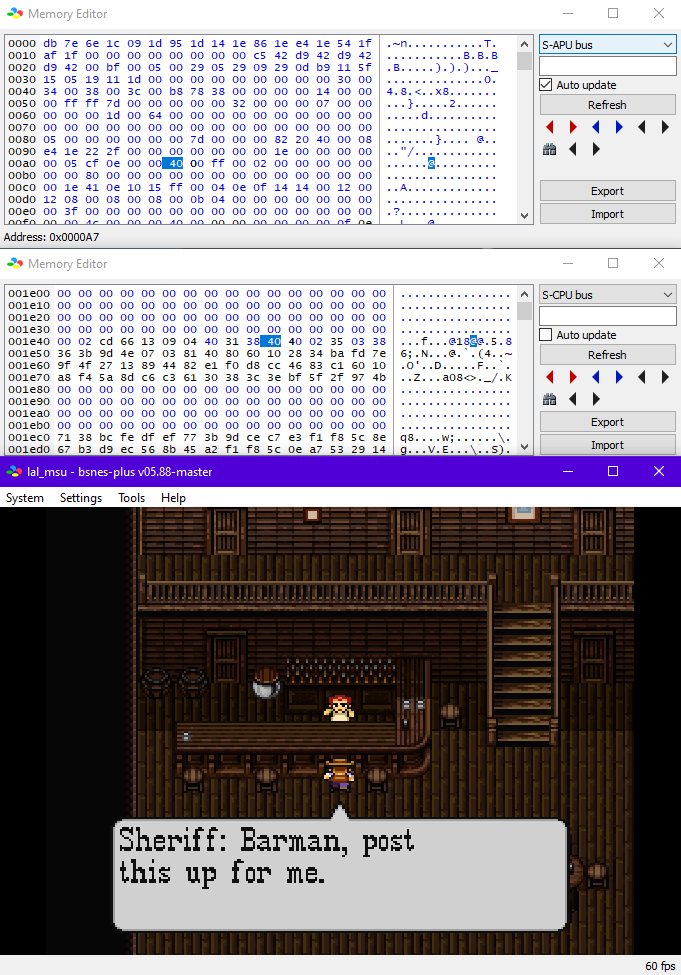 Muting after exiting a menu has been fixed. I needed to move the control code my mute acts on, and I did it in everything aside from where I hooked... blame late-night hacking. Fixed.

Looking into the kung fu level up issue again. It could actually be that the track is meant to resume there and then fade out.
I am now relying on the game's actual "dont restart a song" code instead of having my own in place since I figure they know best. Still, I'll work on clearing that up.

by the way, thanks for doing this much testing for me. i appreciate it a lot.

updated the patch with fixes for song stopping not at intended times + the issue with track restarting on that portion of the kung fu chapter.

fixed a fade error in the prehistoric chapter.
some dirty code that could have caused errors in many places cleaned up.

i've found the missing tracks in code: it's all called via control codes to adjust tempo/instruments in the existing tracks. i should be able to put them in properly once i've finished all the intro chapters.

this update shouldn't break your save states but it might. you're best making a hard save before updating.

Getting ready for a full release. I've located all the missing tracks and put checks in so that they will play.

I rewrote my mute entirely which clears up any softlocks from not having SPC audio playing.

the only area that I feel could have issues at this point would probably be the "near future" chapter, just need to clear up any weirdness with different versions of "Go! Go! Buriki Daioh!"