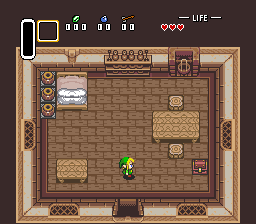 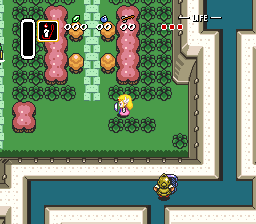 Seems like there's some confusion regarding the Minish Link and Minish Zelda sprite hacks.

So here are all versions of them with correct credits.

Initial gfx edits were all made by Ghillie, but there were some faults, and moegami corrected some pals, later I corrected some gfx hand-drawings which were from the old sprite and this is that version:
http://www.bwass.org/bucket/Minish_gfx+edit.ips


But then I also made further edits: some additional gfx changed in the game (which is not only the main sprite), txt edits and bug fixes, such as when receiving gloves, false colour will go onto the sprite, initially to colour the hands/gloves, but in custom sprites it will go to unwanted colour.


Thus the final version is:
http://www.bwass.org/bucket/Zelda3_Minish_Cap_Link.zip

Ninjagamer had an idea to surprize his girlfriend with the Minish Zelda in ALTTP, but he was a novice and could not do it, despite our verbal help. Then SePH decided to make this for him.

The result was this (old version)
http://www.bwass.org/bucket/Minish%20Cap%20Zelda%20edit.ips

Then Ninjagamer made some txt edits to match things.

But this was again more like a hacker's resource, since the game was not normally playable, it was in a testing state (like all chests in the house to test tunics etc).

Later I fixed a major bug: some main sprite pals are shared with other in game sprites. So I had to redraw the main sprite with such pals to be compatible with shared pals, fixed the monologues to now say girl/woman everywhere instead of boy/man and also edited some other gfx (bush, stone, hud etc).

Thus the final version is:
http://www.bwass.org/bucket/Zelda3_Minish_Zelda_(Gender_F).zip


I hope this is clear now (credits and version vise).
Currently romhacking has both old versions instead of new. However initially the files were correct, but the credits were false, stating Ghostly dark as main person, instead of Ghillie.

Hi Puzzledude. Its nice that these hacks got the updates.

I'd like to nitpick on the choice of the titlescreen. I'd recommend removing the "Gender Fem" subtitle as its a sure bait for trolls.

The normal title will suffice, or add "Featuring: Minish Cap Zelda/Link" around the title.

Just my two cents. But really though, that "Gender Fem" title is an eyesore for a cool playable Zelda hack

I don't think I'll be fixing this, since I already worked a lot on this rom and it took a lot to test it. Making any changes would mean to test the entire rom again, which I won't do.

If this is not fit for Romhacking, just leave the old versions there then, but do note: the Minish Link rar file on Romhacking is corrupt and won't unrar. Thus currently Romhacking hosts hacker's resources, rather than playable hacks, which also needs to be noted.