Bounty to whoever can fix my rom!

Bounty to whoever can fix my rom!

I started modding Hylian Legacy about a year ago (chose it because I liked the customized start menu). I've put in many hours and have three full dungeons completed, working on two more.

The problem I ran into is that the custom start menu created a issue where statues cannot coexist with any other sprite in the same room. After confirming the issue exists with the original romhack creator IntimFuchtler, I'm now a little stuck.

I have made multiple puzzles for the last two dungeons that include statues so fixing this issue is a must. Either returning to the original start menu or somehow fixing the glitch.

If anyone would like to tackle the issue, I would be extremely grateful and would be willing to reward you for your time.

(A couple of screenshots of completed dungeons)
https://imgur.com/a/wV8rkld

You know better than that. No bounty.

I tested this out for you and it is not the menu. I examined the TOT menu, from the original code that Conn posted. So basically I can insert this menu into the ALTTP or revert it back to original again... but Hylian Legacy is different. It can not be inverted or reverted this way, since its code is different and also works.

So you are in trouble in any case, even if you could bring back the normal menu, which you can't, since this is crashing too. Which basically means HL will need this exact menu code, that is already in. So the Rom is quite bugged, which is understandable, since it was heavily edited. Thus reverting the menu will not help you since the statue+sprite is still crashing.


You have 2 choices:
1.) you find an ASM person, who can somehow debug the statue+sprite crash, which is not menu related, but a general bug. The menu must remain as it is. Tackling the menu will make further crashes.

2.) you take ALTTP clean rom, insert TOT menu via Euclid's original code (I decoded this inserting), which is not crashing, and the statue+sprites works by default (since Nintendo's code is clean on this), and then transfer in all dungeons which you made via hex gluing. Or simply renaunce on the TOT menu and just transfer the dungeons. While also transfering GFX.

Actually, scratch that.
I found it with advanced Hex compare.

And the statue will be debugged and will be able to coexist with other sprites in the same room.

Which I have no idea what it does.

If you remove the jump, the statue is debugged, but the newly written code no longer loads at 34299. Only if we could figuere out what the code at 3FD00 is (does not seem to be menu), can we know the consequence of not having this jump (which otherwise debugs the statue). It however still jumps here at 34099.

And the addresses are exactly 200 in hex apart, as if the header was the problem and the jump was inserted twice by accident. If this is true, than the debug is ok. 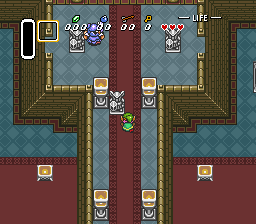 Wow Puzzledude! You are the best. Works great for me, much appreciation!

Yea. I was wondering why the statue was crashing myself, so I looked into it. Now you can bring us your statue puzzles.