While mulling over some issues i was having with my last patch, i decided to start work on this game from the wishlisted games.

Ihatovo Monogatari is the original walking simulator and saw a release only in japan, including a version with CD audio tracks courtesy of the Broadcast Satellaview.

There's an english translated version now, and I like the idea of at least semi-restoring an experience that is now lost due to the BS-X service being discontinued.

That said, I have identified where the databank index is, how the databank works internally, how this information is written to the SPC unit, and even have muting, spc fallback, and playing of msu1 tracks already implemented.

It's too glitchy atm for even a beta release, but it is progressing at a quick pace and I hope to have more to share shortly.

I'm releasing version 0.9 of this hack as an xmas present to you all.

Known issues:
When loading a save file, the town theme starts twice.

i didn't create many proper loops but the ones I did do may be a bit messy as I am not very practiced at that.

Known issues:
When loading a save file, the town theme starts twice.

Maybe a trick I use for those problems is applicable to your rom; I usually use an unused ram to store the track number. Mostly from the lower stack that isn't used (e.g. 7e01c0 or at the very end of the rom, loke 7ffff0. You need to be sure it isn't used by the game.

I actually use that trick in my code lol. Great minds.
it just came about as a byproduct of the very busy place I am hooking. I almost expected to get scolded for how bold I am.

it's not a major issue but it is something preventing me from calling this a true "1.0"

edit: ohhh i see. i think i get how i can use my saved value to fix the doubled song start. huh

also, for anybody that's trying to add tracks to this in the future (one can dream) here's a map for the databanks including a decimal number for what the MSU1 is trying to load for each song. 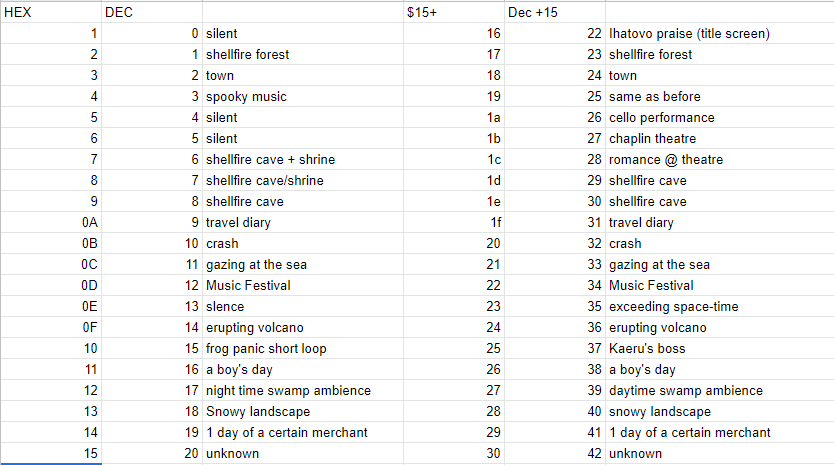 I have a lossless encode on backup for when this progresses.

Incidentally, one ROM of BS Ihatovo is dumped, and it seems likely you can restore every episode's data from it. It'd be neat if someday that could be looked into.

As it stands now, KiddoCabbusses, this hack works nearly perfectly. (in my testing environment)

There is not, however, a perfect 1:1 mapping from the CD to the tracks in game. having watched some footage of the BS-X version as well, it seems particularly difficult to restore as their streaming audio included ambient noise to overlay the tracks and also radio drama voice acting for various scenes throughout the game.  I'd say a true restoration of the BS-X version would require leaks of the BS-X files, both rom and audio data, and who knows if those were even kept.

the missing tracks are "shellfire forest" and "shellfire forest cave/shrine," the pieces that play in the theatre in game, a solo cello performance, and a couple other miscellaneous tracks.