No thats not the right way.

I'll have to switch the items in the Shrine a bit.

You need to place a deku seed between the crystal switches, but not directly in the middle. Then use your hookshot on the pegs as quick as you can before they go down again.

The big problem with this room is that you have the goldstar when you get there and it doesn't work because it doesn't hook as fast as the hookshot.

So the ironny here is that Erocks puzzle doesn't work because of his own request to have a goldstar...so it breaks the puzzle in a sort of way.

Oh my... make something different here then. Or give the goldstar as reward in the next room? As far I know it's a treasure in this shrine anyways...

Problem here is if I give goldstar in the next room and players only get the goldstar and return to the beginning of the dungeon...if they come back they wont be able to get in the room to get the other two chests unless they use skuj method.

I vote for the removal of the puzzle.

Or change it so it requires only the boomerang diagonal throw.

Also removed vip group because there was only erock and MoN in it and got tired of always getting in arguments with Erock.

Theres no need for a private beta, we all in this together.

Ok, make it diagonal throw, you also get the force boomerang right before it so it is just logical

Got a new suggestion

6) People like Superskuj, may wonder why you have no money anymore after this room: 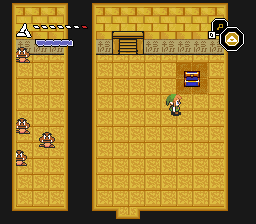 What about a telepathic message: "The gods demand a sacrifice from those who want to pass. Just like humans they only want your best...: your money!"

Totally forgot it costs money, so a hint is in order

I've checked the bugs list and althrough it seems long, most will be fixed in a day.

Puzz problems are mostly warps not on even x and y positions, blocks pushed against walls and destroying floor patterns and...erock puzzles.

Superskuj and other twitch players getting stuck are mostly all of erock puzzles...

My problems are mostly unfinished things and gfx problems.

Your problems you already fixed...

Euclid problems are mostly map problems where it confuses people. Here Icould give a hint in Vaati and the PParallel Tower ruins about the maps special mirroring effects and the deal would be seal.

Erocks problems are mostly nitpicking due to a feeling of superior gaming design. Yet most speedrunners have no isues with my puzzles but are always stucked in some of his designs.

So yep. I do think one month is well enough for me to fix everything in one go!!

Another thing for Euclid:

Supreskui: when I talked to seph at "the source" he said he would write something in my notebook but never did
Conn: I think you find a new way in the lost woods to access Ganon quickly, marked through new arrows in your notepad (menu, switch R). If the way really didn't appear let us know
Supreskui: it doesn't seem to have updated, just shows the original lost woods pattern, and the lost desert pattern -skuj

I tested it by making 7ef336 from 07 to 06 (in my sram it worked that I received the way), and talked to the source but didn't get the new way to Ganon's hideout. I attached the savestate with above change in case it helps detecting the bug:

I think the problem is due to me having use room18.

When you arrive in the source and enter, the music turns off after falling down the hole. Tried this on msu-1, pretty sure native does the same thing. So will try another room once back and see if it fixes the problem!

Room 18 is the church in the original game and the gods of Hyrule Magic knows well some rooms are acting strange when using them in unusual ways.

hmm i was watching the video of supersuj taking on ganon and he didn't freeze on the last hit. I gotta do more investigation there with spin attacks.

Also it might be worthwhile to drop that ganon easter egg hint somewhere.

Yeah otherwise nobody will ever find it I guess.

Can you clear me up with the Easter egg in dungeon X grey room? How to get there?

And what ganon Easter egg?

Maybe drop the hint to Ganon in the galaxy book (at the very end of a long message), just making sure people do read it!

That room in Parallel Tower ruins is mapped to room 0 top right (reachable) and bottom left (unreachable) - so technically if you get out from the Ganon room and go back there it'll lit up top half of it.

Happy to redo Vaati maps if it's causing so many confusion, it's not that much trouble.

I can fix Conn's hdma issues, but not the zsnes one without finding a combination which works in zsnes in the first place - the desert HDMA uses Mosaic which is different to 99% of the effects people use in SMW. At the moment I'm looking at other games to see if I can find a game with a similar effect in it.

Awesome news Euclid!
XaserLE will finish his playtest today and then the beta1 testing phase can be closed (all others are finished I guess).

I'd suggest we fix the fixable bugs in then, wait for the msu, and release a beta2 then. After this the alpha is done and then it is good.

I wait for SePH being back from his truck tour, then he may can answer these questions:
- are all dwarf rings collectable?
- a list of selectable monologues, that shall not be skipable (hardcoded exceptions)
- a reward for beating Aghanim3 superboss (I think about a different Conker tileset with crown, alternatively we could also make it mandatory to view ending #4 (together with 20 rings needed).

My asm tasks are done then I think.

As for the mosaic effect, I found this stuff:
- http://www.smwcentral.net/?p=viewthread&t=71598
- http://www.coranac.com/tonc/text/gfx.htm
- Also, the electrifying and screen change effect uses mosaic, maybe it is possible to adapt its code
(also I found a register 0x2106 Mosaic Size and BG Enable...)

The problem there is not the fact Mosaic is using $2106 (in fact just write into $95 or something to see the effect for the entire screen), it's more that the desert haze asm is using a DMA channel to pump data into $2106 every frame to create a mosaic map(aka HDMA) - think of it as a more fine grained control of $95.

I've been busy and haven't got to the map bugs yet, I don't see myself having time till at least next weekend...

Euclid wrote:Happy to redo Vaati maps if it's causing so many confusion, it's not that much trouble.

I'll add a clue somewhere in the dungeon.

Take your time Euclid, if anybody can fix it, than you

I think the release of beta2 will take at least 2-3 weeks independent from this, probaly even longer, qwertymodo needs to send the msu pack, SePH needs to fix his bugs as well, and also I have one or two tasks left (depends on SePH and his wishes).

I can't seem to find a game which uses mosaic dma for deser effect, though i've found some references to using vertical waves for desert which might be an acceptable alternative if seph is happy for me to change it.

Let's see whether they have advice. Though the chance is little

I could have found out the reason why it bugs in zsnes, but do not know how to overcome this.

I had the idea to look at a zsnes savestate in vsnes: 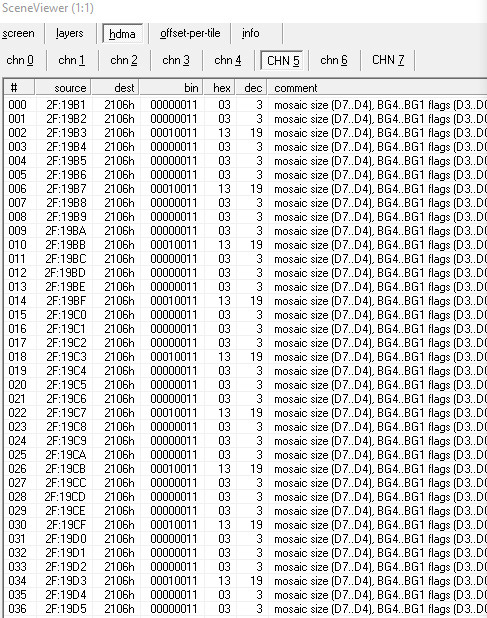 If you compare the source with snes9x: 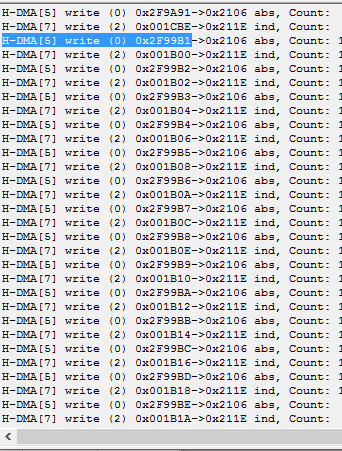 2F:19B1 is ram and cannot work, this is the reason why it bugs; the pointer is for some reasons $8000 bytes less.
I think your pointers are ok though, and have no idea why it loads the buggy pointer in zsnes.

doesn't work, because this is only called at the init and not each transfer but you get the idea

Why is zsnes treating lttp as hirom?

I'll see what I can do. Thanks Conn that helped a bunch.

Great, I think we have the clue... but forget what I wrote above

... though I am sure the bug results from this source...

If you compare the working leaf effect:

with the non-working desert haze effect:

I'm pretty sure this will fix it

hmm I've shuffled the whole map into 7F ram area and it's still not working. Note that even though it's display 2F1xxx it's actually loading the right values.

Hahahahahaha the answer is so simple

The new gfx engine sucks, so don't use it!

Case closed - just have to note it in the readme.

Oh wow! What a relieve

Tried it, and now it works just awesome

alright will add that in the readme!