I still would like seph to fix up the rom name in the snes header though, still says legend of zelda on mine.

The location is ASCII at 0x7FC0 in a hex editor (visible in HxD by default) - don't use a snestool as it seems the rom info area has ASM spilling into it (0x7FB0).

And of course the CRC - that should be the last thing to do before creating the IPS.

The CRC is at 0x7FDC - 7FDF which is so easy to screw up it's not even funny.

I just tried this tool (http://www.romhacking.net/utilities/499/) and it seems to only edit those 4 bytes when you open the rom and use the "repair snes header" option.

Oh yes...
1) I also remember you had the request to give the lifebelt earlier, dunno whether SePH already made this - or has objections to move this

2) change the name:
That's easy, SePH, simply write in the ascii code on the right with your keyboard, the place is just enough to fit this text:

3) Is CRC and checksum the same, if yes:

It is a tool to fix the checksum (it's french but easy to navigate).
-> start program
-> Ouvrir une ROM
-> select data type (drop down) "Tous fichiers (*.*)" (all datatypes)
-> open the rom
-> choose fixer le checksum

It's french so it should not be a problem for SePH

- but one simple byte change screws it up, so after each edit, this program must be run again, so it should be done at the very end first.

I'll do these two things last. I have three small changes left to do. Very minimal actually and then I'm done as well.

After that I'll wait qwerty stuff, repack my msu-1 pack with the endings voiceovers and probably upload them separately aswell for those who have already downloaded the pack soooo they dont have to download 1gb again!

Then all that's left is wait for the 31st!

Conn, the name is 21 bytes in every doc I read, snes9x and zsnes reads 22, so it's chopped off regardless.

I did discover some minor things during my playthrough (still WIP, just finished Mothman moth) which may already be fixed:
- Simpsons hole doesn't stay open after big bombing it, subsequent bombings doesn't have open sfx noise.
- Homer has the Al gore message when you do talk to him.
- you got rid of the background and the mystery chest in room 161

I kinda liked it.

Conn, the name is 21 bytes in every doc I read, snes9x and zsnes reads 22, so it's chopped off regardless.

- you got rid of the background and the mystery chest in room 161 Sad I kinda liked it.
^^thank mr nitpickingbrox for that!

If any requests remain unimplemented, throw it in the "Rogue the bat wishing well" forum, SePH will hopefully open on release

I'm just afraid that this will be spammed with 300 pixel incorrect bugbroxes... oh my

I mentioned it this morning in an email since the forums appears to be in the process of being updated.

This one have to be fixed =p

I had that once, but then not anymore. Will check later. Do you have a Geiger savestate?

Fairly certain it's the rom.

Here's the save state - not sure if you have the rom.

Throw sword or golden scale into the toilet.

Need Seph to test it on his latest rom!

To replicate:
- start a game from save ram (do not use save states) hopefully with all items or at least the flute and sword + hammer
- set 7EF358 to 00 (spin 1)
- get into Mac Chuck
- throw sword into pond
- chuck says its shitz item
- after receiving sword upgrade, see if the description appears.

pfff, you shocked me, Euclid

you have 7ef357-02 (space helmet) in your ram, when throwing this into pond, a major glitch occurs. Luckily this was a modified ram only glitch.

The fix is easy, SePH, nothing to worry about. I just made a sta $0eb0 instead of sta $0eb0,x (sorry for having been sloppy here

) - so in Euclid's case for some reason the sprite was in slot 3 (as he correctly traced).

So, these modification will fix all slots:

That is also the reason why it randomly worked and randomly not, sometimes the sprite is at location 00 (works), sometimes else (no textbox). 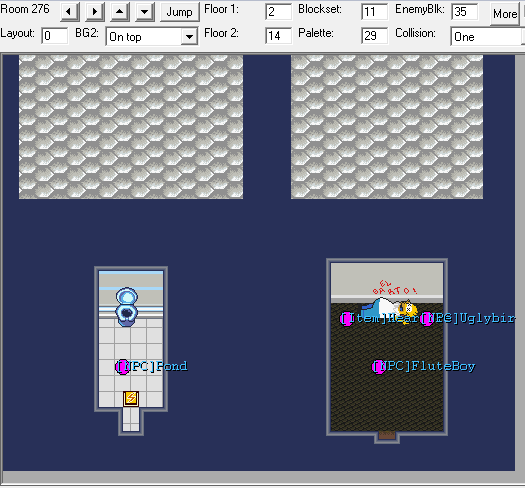 And the whole reason why its in slot 3 is because when I added the simpsons garage, its the room right next to the pond (same room).

Will fix it right away and hopefully nothing else is wrong...five days away from release

Dunno whether Simpson was the cause, I had it before as well (but cannot remember whether I X-skipped, so I ignored).

Shouldn't happen anymore with the fix, but would be awesome if you and Euclid can give it a short shot nevertheless (I tested with an old rom and Euclid's savestate, but the Simpsons aren't implemented yet).
Also the other Chuck maybe, since his values are also to ,x (but guess no problems here)

^^ those works now, so I'm assuming the other pond should work aswell.

will test the other pond when I wake up! but it should probably be fine already.

I just traced it, other chuck looks alright

It still stores to slot 0, but to be on the safe side, I suggest making it 9d as well. I also changed all-in-

no issues in the silver arrow pond, just the mac pond.

Fixed all four values yesterday in any case.

Waiting on qwertymodo now, if he can manage in time, to release it!

Tempted to add an extra line to the credits

Conker the Squirrel will return.

Since you did start the MSU video with a bond reference.

EDIT: adding the squirrel in there will mean breaking it into 2 lines, unless that's fine?

Just so you guys know, I'll release the hack exclusively on Zeldix for a few days before uploading it to romhacking.net!

The msu-1 pack is basically done already, still missing the ending voiceovers, but I can always bundle them later with the rest of the pack and also separately for those who already downloaded the pack.

Everybody is expecting it on halloween, but I'll surprise them by releasing it a few days early

Means people will get to play it this weekend!

P.S. CRC and rom name are done also, so no worries here!

If you have released it, I won't be adding that message.

Since Conker may not return to the good old days since Nintendo is going to trash the brand anyway.

Edit: updated that 10 year old parallel worlds site with the release and link to Zeldix.

Congrats to our retirement

I hope qwerty will get the msu done before announcing it at romhacking, but this is out of our hands.

I'd suggest you clear the lost woods forums and make a public conker forum with these subforums
- patch download (locked), announce news here like if qwerty managed the tracks
- feedback
- asm resources
- wishing well - suggestions and ideas
- bugs and fixes -  some gamebreaking or annoying bugs of course will be found (like that dashing into doors, or fairy pond item received monologue). If so, I will offer 2-3 months maintenance and release fix patches which people can apply. These can be at one time merged into a 1.1 release. Also, if Euclid wants to implement the one or other nifty thing (like his above mentioned idea), he can release that there.

So today I finally finished the playthrough (easy mode on phone, no msu), nothing else to report

Minor stuff - probably on the too hard to fix bucket.
- Tardis boss rush moldrum - if you move off screen (i.e kill him at the bottom of the screen then move to the top of the room) - his head doesn't die properly - causes you to have to tardis key out of there and start again.
- If you go into the menu while the boomerang is coming back with the tardis keycard, the colors mess up after the you have received the tardis key message
- I had issues finding all the digging heart pieces =P (that space colony one took a while to find) along with that one hidden behind the Vaati's dungeon - though Pirate John did mention behind the pyramid.
- kinda wish there's a fly location in front of triforce shrine - so I can pick up the dark lightsaber for ending 5 quickly without having to go through the desert + lost beach again - but that's me being testing lazy.

If I had more time I would've put in a alternative quest easter egg where you start with the triforce medal and remove the lost woods combination to Ganon's Lair.

I'd suggest you sort this all in the bug/wishes threads, once it is established. For now it is too late to fix that

I don't really think its necessary to create an additional forum just for Conker.

If I do that it would be an opportunity for Erock to go crazy again and report evertything he finds out.

I want to call this project finish and stop thinking about it.

Also I don't think there's 200 more bugs to fix...there was four beta testing phases which is more most rom hacks go through anyway!

Since this is the second major hack after PW, and the MOST! modified Zelda hack in the world I think it is reasonable to make that category. Also, this site lived for this hack: you initialized this site because of Conker.

As for Erock, sure that's a point, but: there is absolutely no obligation for you, for Euclid or for me to do anything addressed in that forum. It's just a collection and if one guy drops by in 10 years, like say Qwertymodo...: "well this game is great but it can be made even greater". Also, the asm collection will be a great help for other hacks...
Nothing to worry about from your side, having that forum. Relax and enjoy your retirement!

These next few days i expect these forums to be overrun. If it was me don't release asm/dress up the forums till mid/end next month.

I'd post on acmlms and rhdn once the msu is ready or 31/10. I think pw went crazy after it made it to some tech news websites, which took a few days after the post appeared on rhdn.

Should also do a thread for people who are stuck...don't want my pm box to fill up!