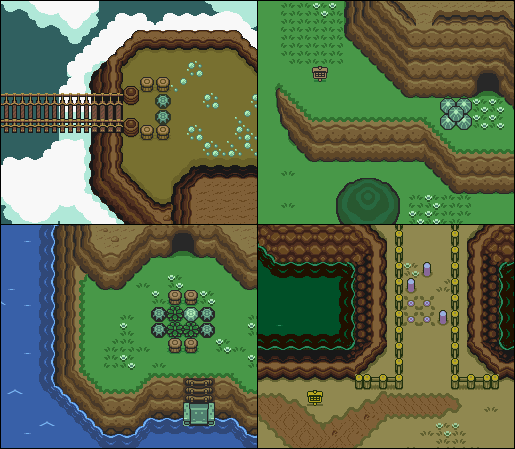 This is my first attempt at a hack (actually it is merely a modification) of A Link to the Past.

As you all know, ALttP enforces a very linear order of the dungeons (at least until you've played a large part of the game). This minimizes the exploration aspect to a large extend. The goal of this hack is to remove the linearity as much as possible, without changing anything substantial. In fact, I would very much prefer if the changes are completely unnoticeable if not invisible.

Obviously, it would not make sense to allow access to everything at any time. There are a few necessary "sync points" for the story: Link needs all pendants to get the Master Sword, to fight Aghanim, to transfer to the Dark World. Link needs all crystals to access Ganon's tower. Etc. I tried, however, to allow an as arbitrary as possible

order to get the crystals and pendants, respectively.

Quite likely, someone has had this idea before. I could, however, not find a released hack.


So far, the (Overworld-only) changes are as follows:

Changes:
These have screenshots and detailed descriptions. So, actually: Spoiler!

I have some things left to change, which are probably trivial for you guys.
So, if anyone could give me some pointers for these...

And some other things ...

I'd certainly appreciate if someone finds something that could be changed to further remove dungeon-order restrictions without removing riddles or the like. Also, if I made mistakes somewhere, please let me know. Thanks!

when restoring the lower original marked bytes the sequence is fixed 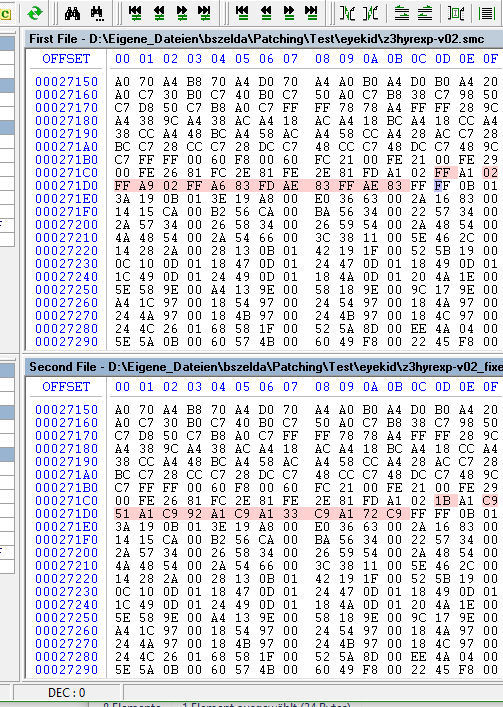 Conn wrote:
when restoring the lower original marked bytes the sequence is fixed

This is absolutely genius! Thanks so much

I should definitively sit down and learn how this is done... I suppose you found the offending bytes with the debugger? There wouldn't be some kind of tutorial around that gets one started with this?

Great I was able to fix. I have 15 years experience in coding, so I know where to look, and how to work with a debugger. The technique I used was to debug the original and the manipulated corrupt rom with trace once, first logs making anything but trigger the bugged event (pulling the lever). Then I disabled the hook and set it again, triggering the event.

The result is two logs for each rom. I discard the first log (where superfluid actions are logged like walking and such). So the second log contains only the action of interest. Comparing the original with the corrupt log (without the superfluid actions discarded it was only 62 kb long) revealed a change in the X-register. So I searched where this change occurs and restored these bytes (given addresses above).

As said, I have a lot practical experience, but for somebody without much asm experience finding such stuff is out of reach.

Conn wrote:[...] for somebody without much asm experience finding such stuff is out of reach.

OK, here I see my problem

I understand what you explain in theory. I know how to use a debugger (e.g., gdb) for "regular" code. The methodology is obviously very similar. But the assembler code is simply unreadable for me... So, probably I should learn asm.

I thought the further problem was on a different address, since the code might use a pointer and jump there. I wonder if there is a pointer to around 0271C0 in the section around 00CBAD.

Yes, the pointer is this one:

Hi, any chance to get this working with the Master Quest hack?
https://www.romhacking.net/hacks/601/

Hey! Did you try simply applying the two patches consecutively? Especially in both possible orders ...

EDIT: I gave it a quick try. Applying the Master Quest patch first, and the Hyrule Explorer patch second seems to work fine.

Hopefully it works. I'll try it out... Now I wonder if you can combine Master Quest, Redux and Hyrule Explorer.

zeldaistehbest wrote:Now I wonder if you can combine Master Quest, Redux and Hyrule Explorer.

I also gave that a quick try, but Master Quest + Redux already fails...

If you honestly think that combning random different IPS patches is a good idea, think again. While the game "might load", combining any multiple IPS patches is a bad idea, and will most surely produce bugged roms. You need to know exactly what the IPS is doing via hex and make sure the same hex space is not affected, but it usually is, so...

You can use this program to check the compatibility:
https://www.romhacking.net/utilities/1080/

Conn wrote:You can use this program to check the compatibility:
https://www.romhacking.net/utilities/1080/

In principle, very good idea! But Master Quest comes only as .bps / .ups, which the patch checker cannot handle... In principle, one could make an .ips from the patched ROM and then check, though.

Puzzledude wrote:If you honestly think that combning random different IPS patches is a good idea, think again. While the game "might load", combining any multiple IPS patches is a bad idea, and will most surely produce bugged roms. You need to know exactly what the IPS is doing via hex and make sure the same hex space is not affected, but it usually is, so...

Sure. This could very well not work... Hence, I said that I only gave it a quick try and the resulting ROM still loaded fine. That doesn't mean that it isn't broken at a later stage... However, someone interested in combining the different patches is the perfect candidate for testing the result - as they are obviously interested in it anyway.

In general, if the ROM structure was changed during the modifications two patches will most likely not work together as they assume specific parts of the ROM at wrong addresses.

I'd assume that if Hyrule Magic was used for both patches, the ROM will have basically the same structure. In that case, the patches should work more or less as intended.

In summary, what I meant to say is: I only tried if the ROM is not completely broken when combining these patches. In that cases it might be worth to "test by playing" whether it works. MQ+Redux broke right away, which means it will be more involved to get that working.

For anyone interested, there's a new version (v0.4) in the RHDN submission queue and attached to the first port here which contains a small adjustment to the big-chest room of Thieves' Town. Now it should actually be possible to get the Titan's Mitt before the hammer