A Link to the Past Gaiden

A Link to the Past Gaiden 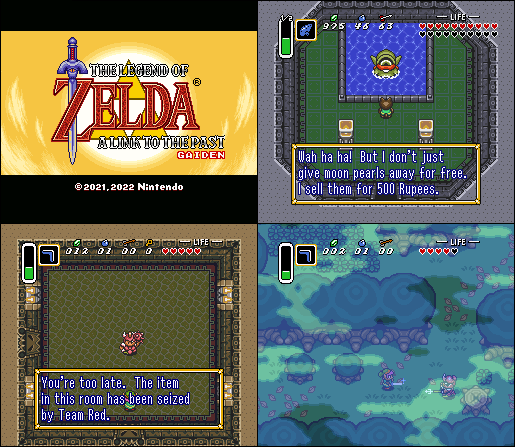 Plot:
The story takes place after the Imprisoning War and before the events of A Link to the Past.  The Kingdom of Hyrule is under the rule of an oppressive king.  Every three years, a tournament is held where three teams compete to lay claim to the Kingdom of Hyrule.  These teams are Team Green of Kakariko Village, Team Blue of Labrynna, and Team Red of Holodrum (An idea I'm playing around with.  They may not be from Labrynna and Holodrum).

Each team has a Team Leader who essentially does most of the dirty work while the rest of the team provides assistance.  In order to achieve victory, each team must collect Seven Scrolls from seven dungeons.  The first team to collect all seven Scrolls is then presented with the honor of a fight to the death with the King.  Defeating the King is no simple task as he is an ex-Ganondorf follower.  He parted ways with Ganondorf when he set out to acquire the Triforce from the Golden Land (hence the reason the King is still alive).  He considered Ganondorf a fool because many individuals wasted their lives looking for the ancient relic.

You play as Link, a young member of Team Green.  While the title of Team Leader goes to a girl by the name of Lyn, she goes missing.  Link sets off to find her while simultaneosly taking her place as Team Leader.

A Link to the Past Gaiden :: Comments