ah I see... I can try to figure that out, should be a table somewhere. Any room or entrance number I can find those (with information in which dungeon).

Mimics are the alternative version of the Rocklops.

If you put a Rocklops on the overworld, both light and dark world versions are just the original Rocklops.

In the dungeons it can be the Rocklops or the Mimics.

What is interesting is that in Gannon's dungeons they appear as Rocklops in one room and then as Mimics in another. Both forms in one dungeon.

Wait, so the Mimics are only able to appear in three rooms out of a couple hundred? Or are those the only ones where they spawn originally, but there could potentially be others?

I skimmed though the rom and just listed where I saw them and how they appear originally. There might be some more rooms if I missed any.

I also put a Rocklops in the ice dungeon as a test (dark world) and it was just a Rocklops not a Mimic.

This will make stone cyclops to mimics in room 212

This is just a question, but is it possible to have both Mimics and Rocklops existing in the same room in both of their different forms?

Could it be possible to separate this sprite into two different sprites so that Mimics could then be used anywhere?

Here's when I changed it to 00 in blue. However, this requires a lot of asm to point to the correct sprite. I'd stick to those 4 rooms, since it's really going to be complicated to code this for little outcome if you wanna change it. 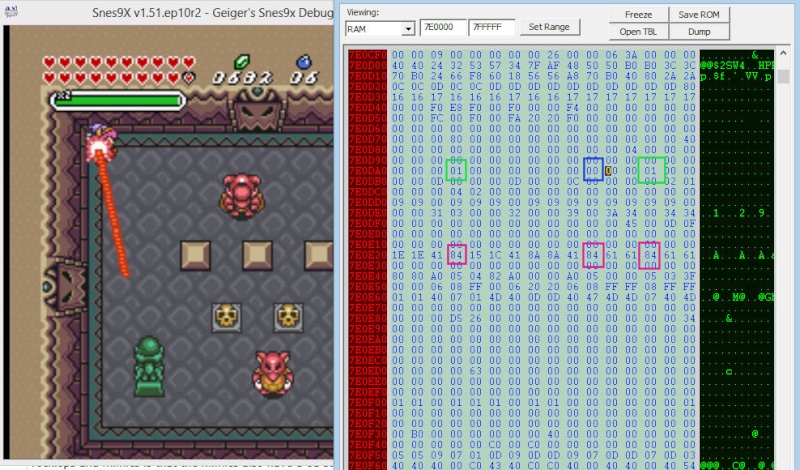 Wow! So unless someone finds an easier way we are pretty much stuck with having Mimics in only 4 rooms.