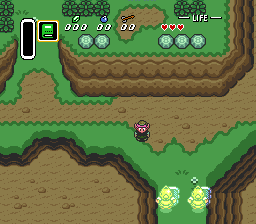 There is a palette change of Link when using this (couldn't get rid of it but you can see it as effect of using this feature) :B

So together with the dust girl that can be turned into a fairy using the Magic Powder you now have two possibilities to block somehing via a sprite and an item.


If you want another sprite warped:


Change 3F (palace guard) into the sprite you want to be warped away, list by MoN: