I am the current developer of the Link to the Past Redux hack at RomHacking.net.

Right now I am mostly done with the hack, I have improved and modified everything that I felt was a little off in terms of the franchise as a whole.

The only thing I haven't been able to modify is the palette used for the King of Hyrule in the Credits.
I can change the palette for sure, however, whenever I change it, the palette for all the Green soldiers (and some other NPC's enemies) are modified. It's a shared palette so I need to find the global palette byte that controls the palette for that sprite in particular.
(For better reference, the palette I think is palette #14 in the enemies section in Hyrule Magic)

I managed to modify the global palette of some enemies like the thiefs and such using the following link as a reference:
https://www.zeldix.net/t444-change-global-palette-of-a-sprite

However, it seems that the global palette for the King of Hyrule is not found in that section of the ROM (and yeah, I tried every byte in that bank

So my question here is if someone could help me out to find this global palette for the King of Hyrule sprite?

I am talking about the sprite that appear at the Credits, and not the one in the opening scene. (The sitting King in that sequence shares the palette with Agahnim btw).

Here is my mockup palette compared to that of the original:

Anyone has any idea where these global palette bytes might be located?
Thanks in advance! 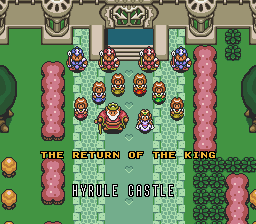 Wow Conn!
Thank you so much!
That was exactly what I was aiming for.

If you don't mind and have time to, would you mind explaining how you found that byte, please?
I'm very interesting in the technical know-how since it might come in handy for others and for personal knowledge.

Here it was a bit tricky, because the ending sprites seem to use a different address - I observed the ram in geiger and found them in $0f50[0x10] (experience).
The rest was breakpoint tracing.

Oh I see, interesting.
I assume you were using Write breakpoints for the RAM addresses, right?

Thanks for the explanation