The Legend Of Zelda: Secrets Of The Past

The Legend Of Zelda: Secrets Of The Past

The patches need to be applied on ALTTP (US), no header. You need a UPS patcher.

Hello Zeldix users! My name is superskuj and I'm ready to present a brand new romhack called Secrets Of The Past! This is a small/medium sized new quest, featuring all new dungeons and a new overworld. I'd rate it at a relatively low difficulty, though I hope some parts will challenge your mind or body in a satisfying way

I'm calling this the 1.0 version, though I expect there will still be some bugfixes and minor tweaks etc to come. I believe, however, that all major fixes are complete. Please provide me with productive feedback to improve this and also improve my skills for future projects!

Patch it to an unheadered US version ROM.

Edit: Fixed a few bugs and updated the readme with more info about how to patch a ROM, I'll call it v1.01

I'd also like to post here all the hex edits and changes like that I made in case some of them might help future generations. Some of these are already known and documented, but for convenience I have them all compiled together. Please excuse my poor formatting, hopefully it's still comprehensible

Hopefully I didn't forget anything, or make any last minute mistakes with the rom and most importantly:
Enjoy <3

The Legend Of Zelda: Secrets Of The Past :: Comments

There are a few different ways to get through there:

Spoiler:
I usually started from the bottom with the orange pegs down, shot an arrow east then moved up to the orange peg before it hit. Then you can throw a bomb at either switch to get through to the next part.

Okay, I'm now in the next dungeon.

Spoiler:
I've never seen such an annoying dungeon. I already didn't really liked the original ice dungeon because of the wonky movement and collision detection while Link is on ice - but this dungeon? Oh my god... You have to be perfectly aligned to every spike, otherwise they will hurt you because of Links collision box. And that's very hard if you are shot at from laser eyes, have to ditch rotating fire balls and move like a drunken snail because of the ice floor. But the best part are the ice crabs (that things from the walls). You can kill them with the fire rod, but only if the are far enough away - otherwise the fire will just go through them. And good luck getting away from them. They are fast, and you are not, because of the ice floor. When one of this guys reach me on the ice it's nearly always a game over, even with fairies.
And good luck trying to go through a door if there is ice before it.
But to be honest, I think you already know that. Why else should the whole dungeon (down to B4, that's where I am at the moment) be just a big tunnel with key doors? They stay open, so it's not hard to go down again after a game over. That just shows how good this hack is: Even in a highly annoying dungeon you find a way to make it less frustrating.

All in all I can say: This is a really well made hack!

I did try this hack. It looks promising enough, but I went to this problem in dungeon 2(the desert one): 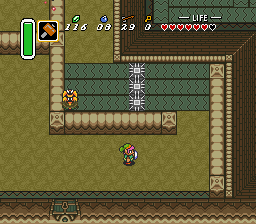 I don't even know how am I supposed to get through this. Must I be a pro here?
Also, there's a cave with the red darknut throwing green bombs and 2 green darknuts walking in-between small iron walls. Must I use the Cane of Somalia there?
Also, isn't just me or some items are way too hidden like the bombos medallion?
Still, I'd like to see more of your hack!
Also: 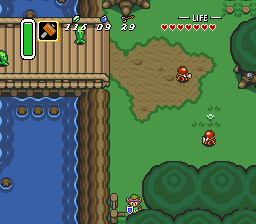 It isn't bad, but you might want to fix the cutoff.
Edit: Never mind. hookshot=win.

Oh, At first, thank you for the hack. I found out your hack today and I'm excited to play it.

Just played through most of it and wanted to drop a note to say, thanks for making this!  I really enjoyed it.  Even though it's a short, manageable size, there are some pretty clever puzzles and uses of items that I enjoyed having to figure out.

Nice compact hack. Overworld maybe more so than I'd prefer (it's very easy to run into all the "guess I'll need item X here" dead ends), but some people want to focus more on dungeon design I suppose. I do like the 2 items & bosses per dungeon approach, which is not done often.

Difficulty goes up pretty fast, but mostly honestly … the only things so far that seem cheap are a few of the Beamos conveyor belts in the desert dungeon and the snake shooter in the Arrghus fight. (I just got the fire rod, will be reaching pendant 2 soon probably.)

Minor bug BTW: ice elementals can be killed with swordbeam hits, allowing getting to the ice palace boss w/o the fire rod. Moving spikes and antifairies also flash as if taking damage, though I didn't try yet if they actually die at any point.

Edit: now have all pendants and just Ganon left. I liked the generous shortcuts-to-last-boss available in most dungeons. And yeah: antifairies are also killable by swordbeams, even though it takes something like 64 hits.

Superskuj, I would like to ask if there's a way to know if I obatined all items in yout hack. I beated this game but I don't have a certain if I beated the game 100%.

Spoiler:
are like an optional easter egg that require a small glitch to get to. If you can't get to them you're not missing anything important.

Which glitch do I need to take advantage of? Hookshot-dashing, dash clipping, or something else entirely? I'm a completionist, so I want those chests. lol.

Which glitch do I need to take advantage of? Hookshot-dashing, dash clipping, or something else entirely? I'm a completionist, so I want those chests. lol.

A glitch that I've never seen used in another LttP hack. If you push a movable block, you can fire your Hookshot through the block during the brief second that it's moving, and use this glitch to Hookshot through a block if there's something to latch onto on the far side. This is how you get those two chests.

So, I'm also a completionist, and I have been wondering about these "three magic spells" referred to by the Potion Shop attendant. I assume these refer to the three Medallions. I have two of 'em. I've known about Ether for a while:

Spoiler:
Near the beginning of the third dungeon, at the far right end of a large pit room. Ram the block in the south to get to an invisible path.

and I just located Bombos this time through:

Spoiler:
In the Village library; pound the table in the bottom left to destroy some invisible pegs.

but I've never seen a trace of the Quake Medallion. Can anyone point me in the right direction to locate this? Though short, this is a nice quest with some interesting puzzles.

Besides the Quake Medallion, I also do not have Ice Rod, Book of Mudora, Cane of Byrna, Bottle4, Sword4, Mirror Shield, Red Tunic, or Moon Pearl. I'm missing 5 Heart Containers (as in, I have 15), no 1/2 Magic, and no extra Bombs or Arrows. I'm pretty certain that none of these can be found in the game, but just want to check if this is accurate.

Thanks a lot for this hack