Also much thanks to Puzz for the tree stump grabbling and Castle Hammer splash fix! 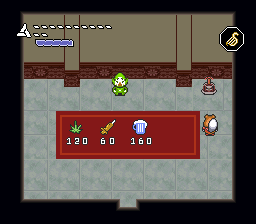 The witch is implemented as a Koka Kola well, with a sort of over-creative monologue when you give her the can

Try yourself... and sorry about the well, I am no pixel artist, and that was the best I was able to make out of the witch... 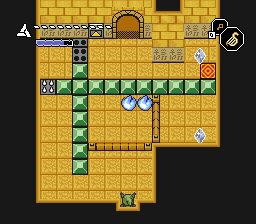 You can now easily reset the riddle in the upper screen both in Supersuj Twitch and SePH Computer by using the warp - it was awful seeing youtube videos where people ran out 20 times to the overworld to reset the 2nd room.


Code:
I leave the old version online as security:
http://bszelda.zeldalegends.net/stuf/Con/ConkerHRT_v1.25.zip

Of course people can also edit it further to their own desire.

I will be submitting my edit ideas for my own "Erock Version" in this very thread soon.

I hope you will honor them so I will not have to make a separate "Erock Version". We don't want two competing version of the game out there.

If you want an improvement on the coka coka fountain, I can see what my artist can do if you are interested.

So please be on the lookout.

*gosh, Erock, don't you think I fulfilled enough of your wishes already? I'm not very interested to see your points. The fountain is not perfect but good enough. There are some other sprites which need improvement, but we cannot spend our lifetime on it.

You are welcome to make a competing 1.2.7Erock fork upon the 1.2.6 if it is your desire, nobody keeps you away from that.

I will be submitting my edit ideas for my own "Erock Version" in this very thread soon.

I hope you will honor them so I will not have to make a separate "Erock Version". We don't want two competing version of the game out there.

I think I've said this a zillion times: there is no need for you to post anything here. Make your Erock version or 1.27 version on your own, and leave others out of it. Once you are done, you can post the patch.

I really think this game is finished. There was a small bug collection like the hammer splash, but what really convinced me was Smash's playthrough where he missed the part giving Koka Kola to Tingle. So I thought this to be a sincere "nice-to-have" to put another hand on this game, while doing so I fixed the other stuff with Puzz help. Was little enough.

All you can do with your skills Erock, are making some dungeon puzzles greater, or/and replacing the one or other sprite. I really think your 1.2.7 (whatever) might be an improvement, but there's also the chance that some of your puzzles are try/error... and I really have no nerve going back into the development stage again.
My best meant advice: Be happy with the stage how it is now. You've influenced much in the development, the game has much of your handwriting, and I guess to the better. But: ...let go at a point

I will only tinker on it further in case a serious bug is found (there's always the chance that HM corrupts anything, therefore I leave playtested 1.2.5 online). I am totally satisfied with it, and I think it cannot be made better (except nitpicks, which can be always found if you look after them).

My "Erock Version" will not try and make major changes. Think of it as "fine polish".

I will not be adding in tons of new puzzles. Only fine polishing up what is there.

Also I will and can give a reason for every change I make and can argue why I'm making the change.

Wanted to add, the pixel artist who did the sprite artwork that I was working with. I don't think his name ever got credit. It would be nice if someone put his name in the readme file at least.

Ok, added him here:
http://bszelda.zeldalegends.net/stuff/Con/High%20Rule%20Tail%20Readme.txt
(also in the zip file of course)

I can't edit the ingame credits though, that was done by Euclid, well, probably I could but...

Note that many stuff is uncompressed.
Witch fountain is at 11/d0c0
useable item like the hammer is at 11/c020
sunflower fairy at 11/9000 (while Rougue fairy can be found in zcompress)
...and so on. E.g., SePH used many graphics like the witch for other stuff so I needed to implement it over extra vram transfer.