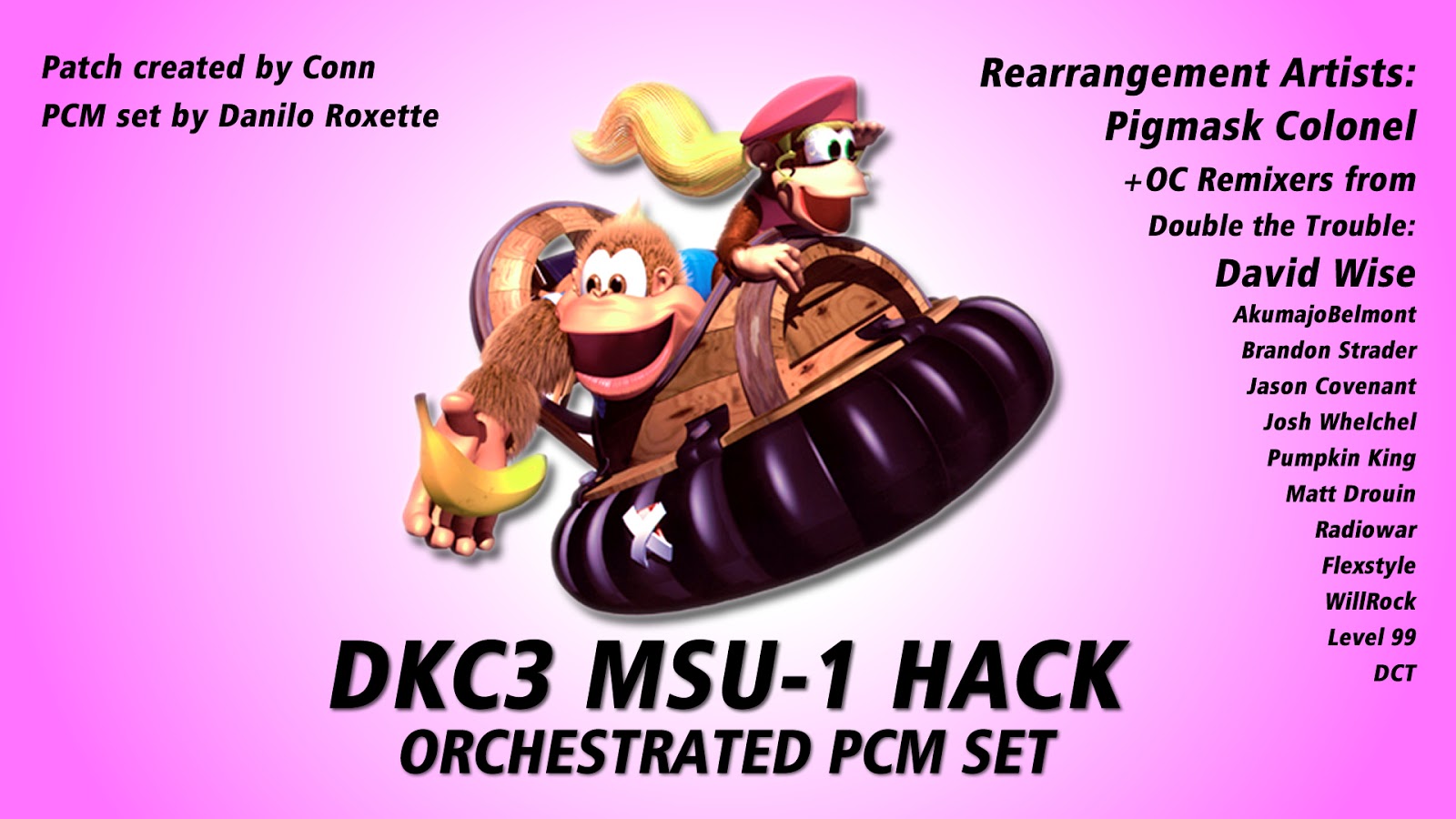 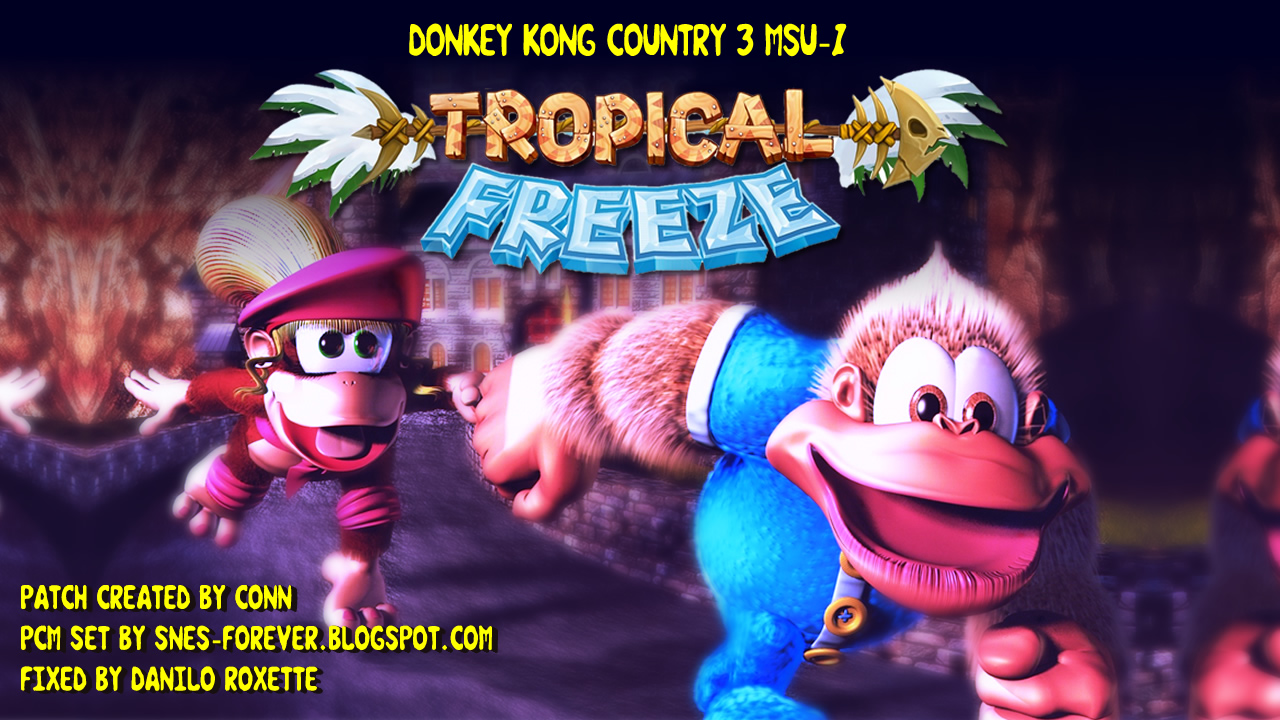 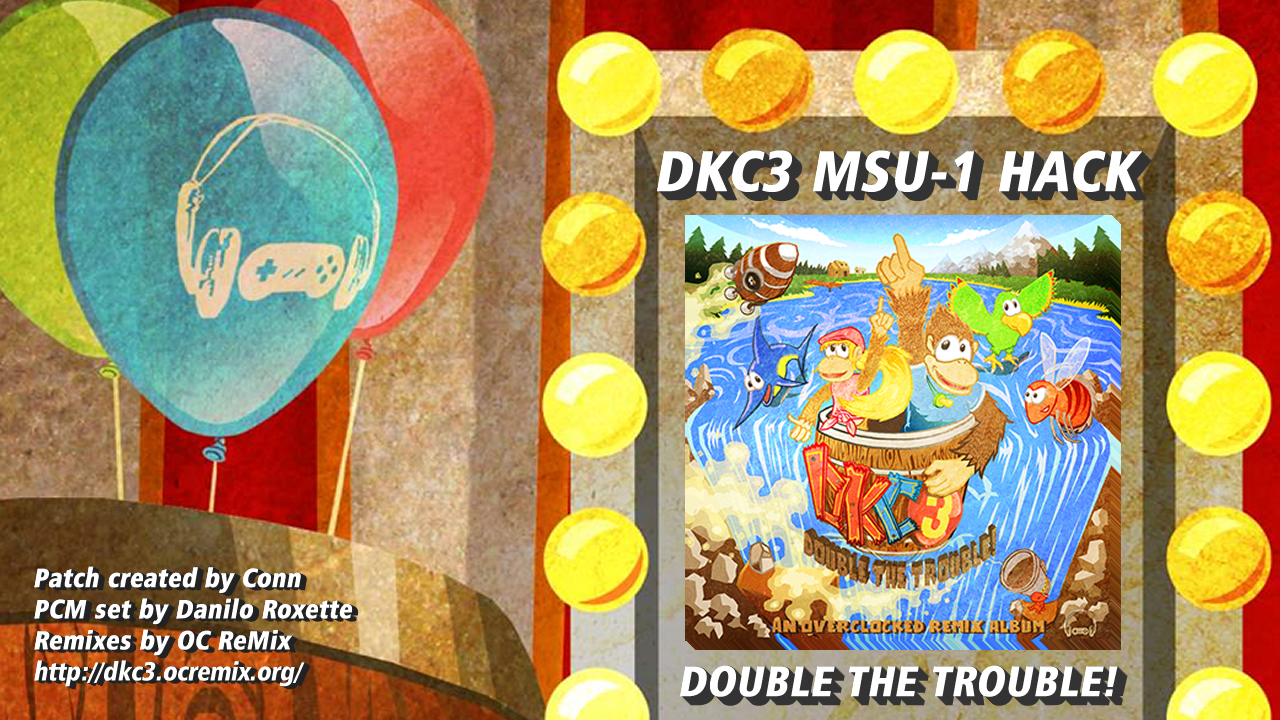 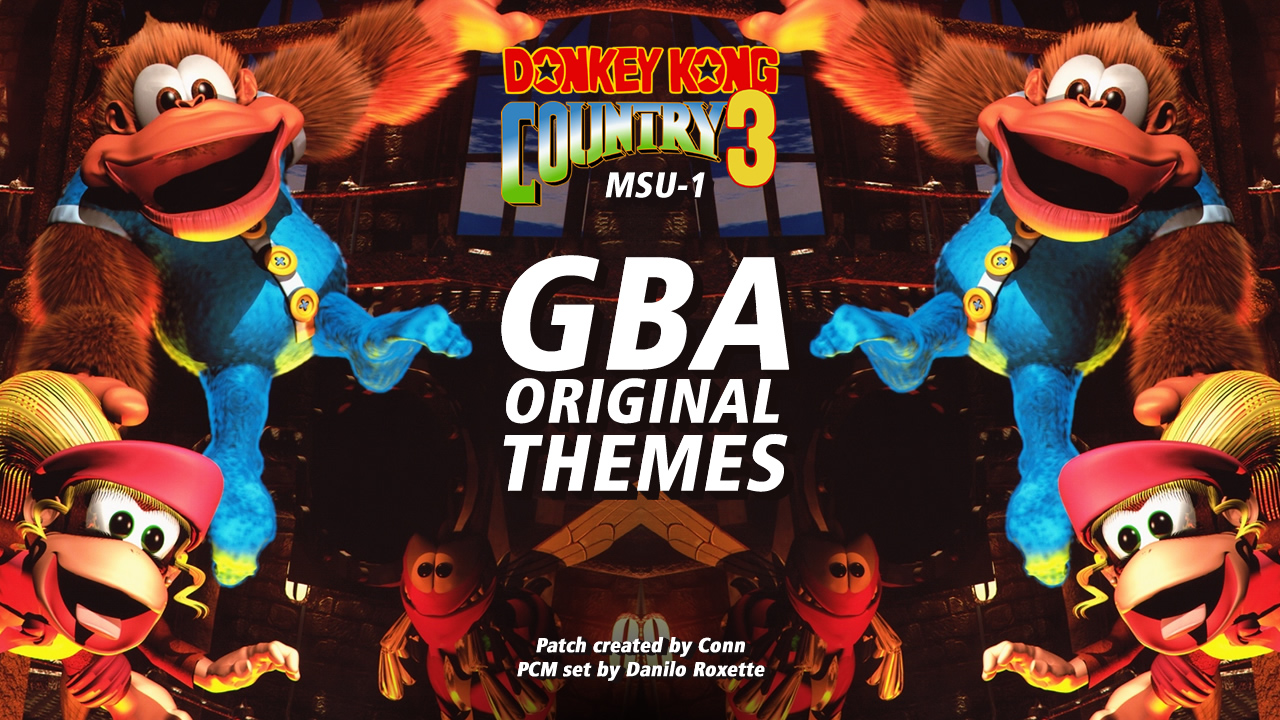 https://mega.nz/#!hJh30IgI!PCEJBLE2DuqBphZJojeXFZuKji5_IK3br0AQVk56dTk
Description: Pack with original tunes from GBA version. Counts with 7 enhanced tracks based on the original samples.
Preview: https://www.youtube.com/watch?v=xjSx0jUX3_A 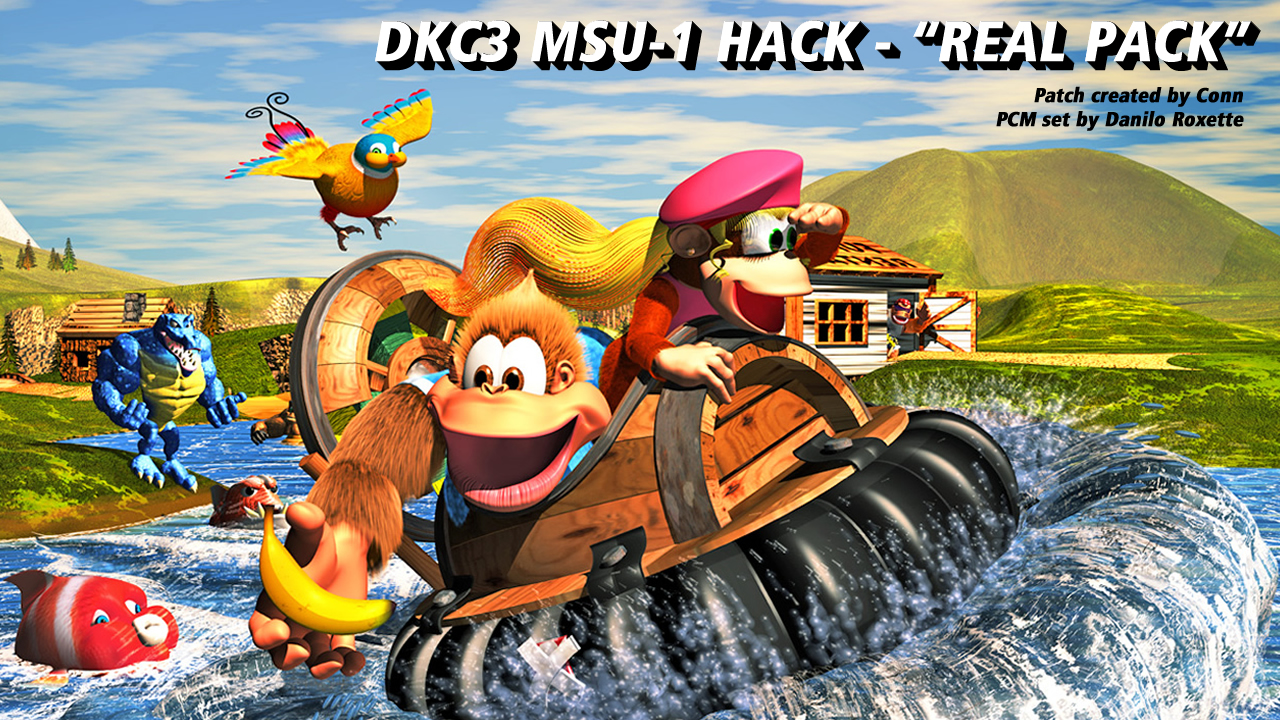 https://mega.nz/#!RU401QAY!aVSXhHYypY14a7n-v-uHP4N4L88bWKkgzdopuKA0O1E
Description: this set "restores" the spc music switched off by the audio mute, no need to use it actually I think - just play the original rom without msu in this case you want original experience. 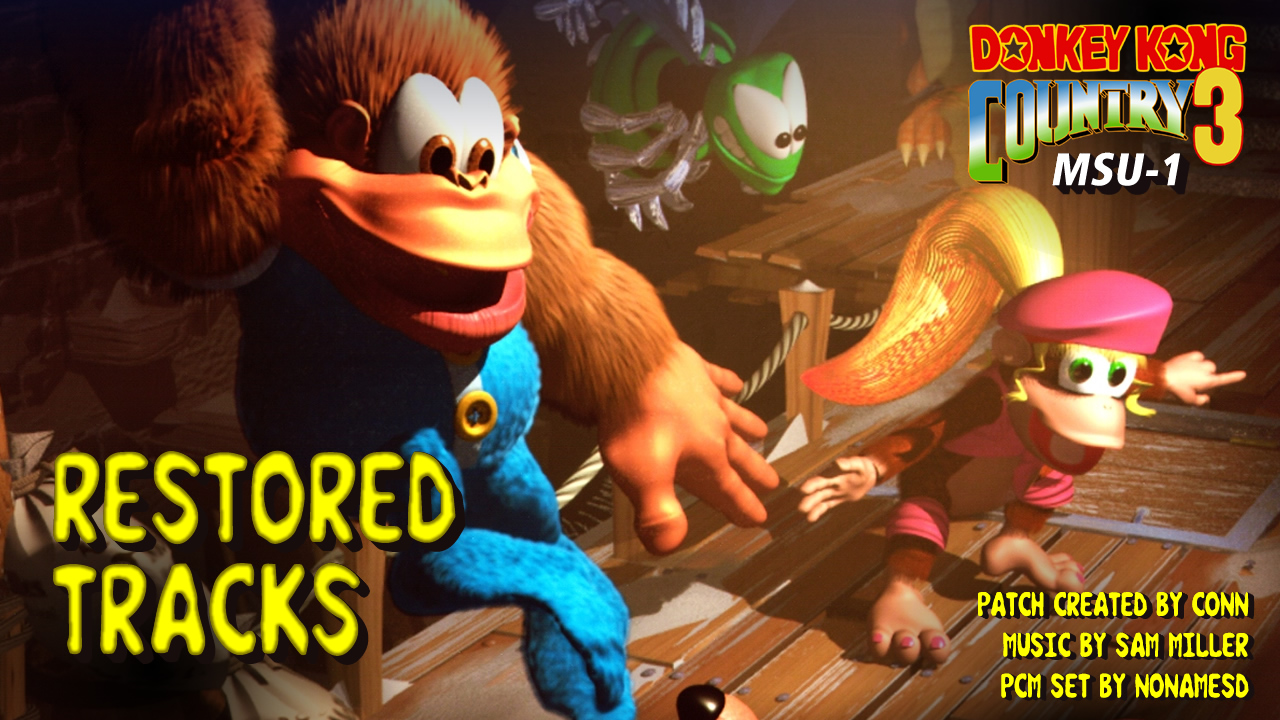 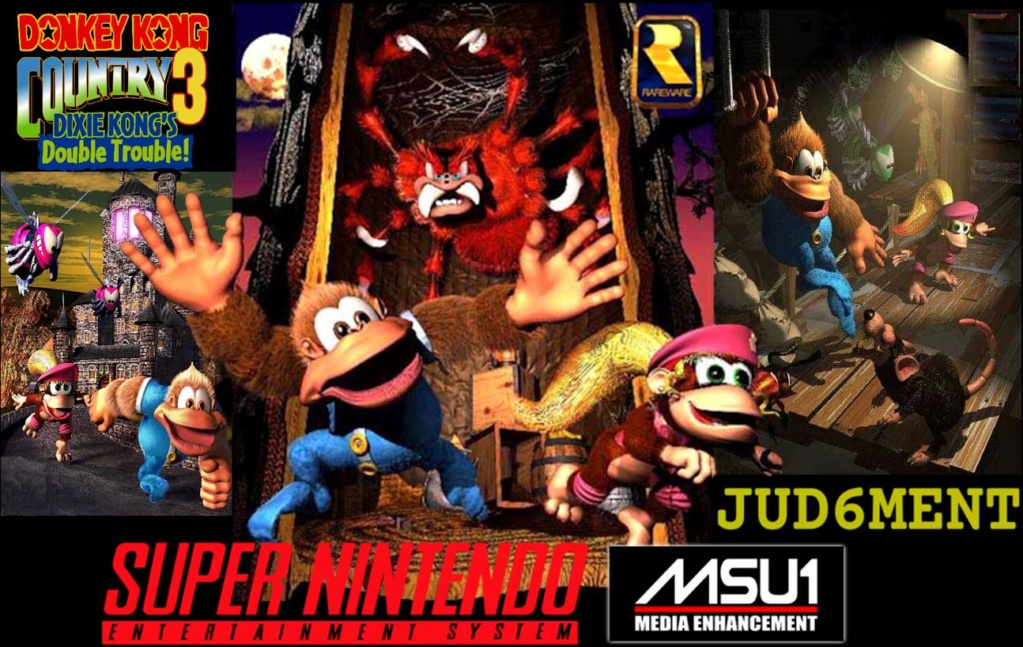 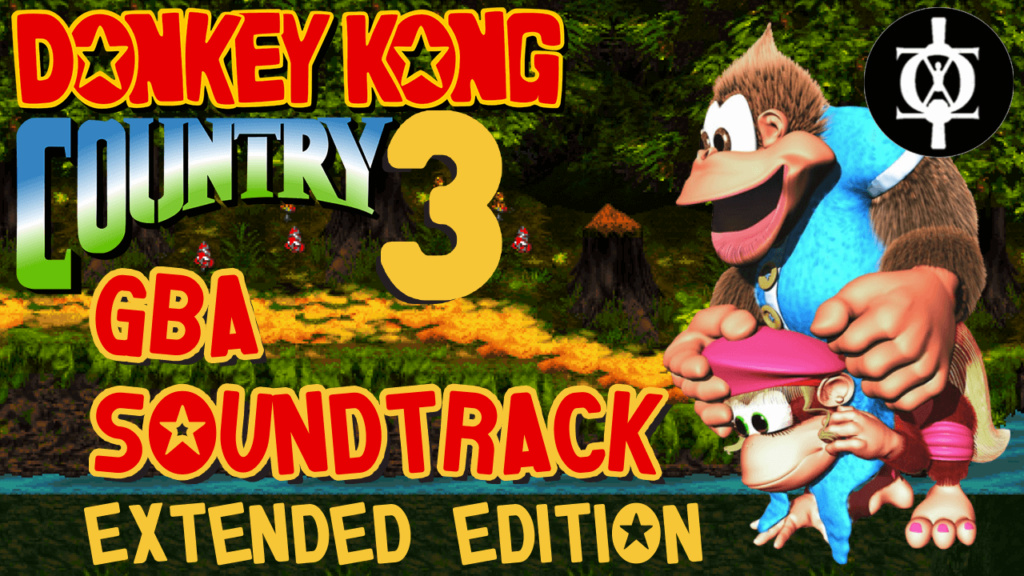 DOWNLOAD:
https://drive.google.com/file/d/1uoemjqkjVy_1V2tqEt2upJ_M3y-DWWQG/view?usp=sharing
Description: It took a year, but it's completed at last. Inspired by Jammin' Sam Miller and his soundtrack restorations of the original SNES trilogy, I'm aiming to do a similar treatment for this version of the game, but with modern virtual instruments. I mean to expand upon the song arrangements so they build a bit more and don't just loop or fade out.
YouTube Preview

My pleasure, next week my project release as well.

What are you working on? I'm quite curious

Right now I am working on SMW2-Yoshi's Island. I thought it were easy but it isn't - but: it seems that I cracked the code

- Nintendo did some filthy music bank changes in that game (we know that already from Zelda and such).
Now I only need to map the themes and check exceptions...

I guess I can let you guys in on the loop...

Awesome News.
I have a Question.
Can you make the MSU Patch compatible with this Hack of SMW2?
https://www.romhacking.net/hacks/2658/
It mutes Baby Mario’s crying and the timer countdown sound that normally plays when Yoshi is hit and loses Baby Mario.

Conn wrote:What are you working on? I'm quite curious

Right now I am working on SMW2-Yoshi's Island. I thought it were easy but it isn't - but: it seems that I cracked the code

- Nintendo did some filthy music bank changes in that game (we know that already from Zelda and such).
Now I only need to map the themes and check exceptions...

Honestly the code is complex enough, so that there will be no special adjustments I think. Right now I was able to map all music banks, still need to code down all exceptions in these banks. However right now I try to get all exceptions like the dizzy flower theme and such. I still gather all required stuff, to get an "authentic" patch.
Regarding your patch you might be lucky, this is sfx and not touched by my code.

Nice that you like our work, but it is not necessary to thank us in all threads. If all do it on all threads, this site gets completely spammed

I just receive a DMCA notification and all of the packs are unavaliable for now. I'll try to fix it soon.

Oh, I hope you can find a stable host, this dmca is really getting a problem. If you find a host, please just drop the new links, I'll update first post then

oh my even your spc was deleted

Unbelieveable - That's indeed a mistake by google
Anyways, I updated so far

A  guy who spread this MSU-1 packs on his blog made a pack with Tropical Freeze themes. It looks nice, but I didn't download it yet. I'll post the link of the Youtube video because the pack is a "full" one and cannot be linked here.

Sounds nice...!
is it possible for you to download the stuff rip the rom off it and provide a link to this set so we can put the link here as well?

@dani
don't mind. I had some place left on my own cloud and uploaded it there (without the rom).

Just a general info. Pev checked this weekend all downloads, and we needed to recover some, but now everything is up to date.

While checking, I had the tropical freeze pack on my google drive and it was DMCA:ed, so Pev put it on his drive.
What he noticed is that this pcm pack is poorly made. It consumes 2GB, loop points set not properly and so on. If any pcm artist and the ambitions, my request is to fix this pack if possible.

Sad with your DMCA notice.

and, rigth now, I'll not be able to do that, or even try to fix it. (btw and I don't know how the pcm's were worked).

And about the weight, my remixed pack have ~2GB too. Its huge and have duplicated pcms inside. When we was developing it, I didn't ask if you could point the repeated themes to a single one inside the code. The duplicates in my pcm pack consumes 440MB.

(I revisited the spreadsheet to remember wich tracks are duplicated: https://docs.google.com/spreadsheets/d/1fz_VBt2tThmZ6LTTcoPqqb0XhC-B5ELmnjtGUsOgCfQ/edit#gid=0)

Oh ok. I would be able to fix the looping tracks with some additional code, but 400 MB more are ok imo if the pack has 2GB anyways. Call it my lazyness, coding isn't much trouble it's more like
cmp #$2e ; is it pcm-46 stage clear
bne $02; if not branch two bytes
lda #$34; load -52 instead
but this means next to the code also all pcm sets need to be re-uploaded as well then.
Ah well, if there is truly desire (too little space in the cloud or whatever), I'd go this way with you. But then if I look into the tropical freeze set, the author has not that many repeating tracks: coomparing the file size, the same are 43,44,45 but e.g., pcm -24 and 19 (which you marked the same, are different tracks here).

I never tested this tropical set as well, but e.g., in DKC2 we had the issue that the theme was played to the end, then 2 seconds mute and began anew (no loop point). I do not know if we have the same issue here, but if there are the same issues we should maybe try to fix it. If it's only the size, then I am ok with it.

Edit: just tested some levels. Luckily the author of this set used loop points. So from my side we are good, even if the pcm use place consuming pcm:s.

I'm ok with it too. And, in a certain way, I think it's fine this independence between some tracks because someone, someday, could plan different versions for the same theme.

Well, I downloaded the Tropical Freeze pack, but I'm so ashamed because I made the suggestion to put it here (...) I was enchanted by the youtube video...

I analysed 2 songs (24.pcm and 37.pcm) and decided to stop. Clearly, the source are low bitrate compressed files. A MP3 file at 320 kbps sounds better than this. I'm not familiar, but I think that maybe is not difficult to retrieve high quality FLACs from a Nintendo Wii U isos. So it makes no sense. And both files got random and falty looping points rendered.

It's a nice idea. The songs are great, but this requires a complete rejob. Only the themes matching could be respected.

I'm so sorry to made you both work with this upload. if I had waited to check, I definitely would not have suggested.

I'll search for the FLACs

Oh please don't apologize, bringing this set up was a great finding, I am sure the community absolutely appreciates it!

It's just that Pev and I wondered about the huge file size and the poor quality that we brought this up. Also I admit I never possessed a wii, and now was the first time I googled tropical freeze and found out it is a commercial game, so no wonder I got DMCA:ed.
Sum up: the pack is good enough, and hopefully at a safe place now. We can leave it the way and the poor quality it is. No need to invest anything further imo, esp considering that we have your amazing set!

Ok. It took me a lot of work because I'd never decrypted Wii U roms before and this one obviously had to have a different file system than the majority of another wii u roms out there, but I got it. I've restored the songs directly from the source, so now the quality is the best possible. Unfortunately, is quite confusing search for the songs between tens of thousands .CSMP files inside the rom, and I couldn't find the original audio stream of the following songs; "Intro", "Wii U Menu", "Tropical Freeze", "Wing Ding (Hut)". I replace them with high quality 320 KBPS MP3s (I couldn't find non-compressed files over the internet too. That's why I made the decryption at the 1st place.)

I'd never played Tropical Freeze, so I wasn't familiar with the soundtracks. Now that I am, I think that some track selection could be different, but I respected the theme selection/correspondency of the snesforever's pack. Once them took low quality avaliable MP3's to made the pack, the songs repeats a lot before reach it's real ending-looping point. That's why the pack was huge.

Surprisingly, I retrieved the looping points infos from the original song files in the Wii U rom. So, now, there's no unnecessary rendered loop. The zipped pack have 800MB.

I'd made tests with snes9x 1.58 and I think some tracks are loud, but I still can hear the SFX and there's no audio clipping. So, if everyone think it's loud too, I'll fix it.


Major editing in the songs;