* Please verify provided CRC checksums in readme file before using this patch. Please do not re-use old save games. In other words, erase your old SRM files or you will have problems.

*Restored by Pinci. YouTube playlist can be found here.

I confirm that the brilliant Conn's NMI routine debugging, and the flawless pepillopev's porting operations released in version 8 solve all the problems present in the PAL-FRA version.

I can not be sure of that, but my guess is that problem was occurring since the beginning, and is the reason why there were unsolvable bugs and glitch in all the WIP and released versions since version 1.3 of the patch (at least highlighted in the PAL version).

Thanks again to both of you for going so far and sole that mystery. I am very happy to get it fixed (and also happy for pepillopev who works on that specific version for a very long time).

@alex_tenjo I am pleased to hear that this issue is finally resolved for good. I was stuck in 'tunnel vision' mode really bad. I had to call in the big guns for assistance to see past my own self-created roadblock, lol.  Good news, nonetheless.

Thanks again Conn for helping me on this. Same to you alex_tenjo for staying the course. I know Mr FGZ should be pleased as well.

I played for 2 hours straight and no crashes. I think it finally looks good. It wasn't my sd2snes, it was a bug

fullgamezone wrote:I played for 2 hours straight and no crashes. I think it finally looks good. It wasn't my sd2snes, it was a bug

Glad to hear the final patch was a success. Took a long time but glad it is done.

It wasn't my sd2snes, it was a bug

Yes, sorry that I suspected this. Alex and pev gave thumbs up while only you seemed to have this problem. First since relikk reported a similar issue it was clear that there still was something wrong with the patch.

Why it sometimes worked could have different reasons:
- people used different pcm sets so some tracks were shorter and could be loaded in the limited nmi time without causing a second nmi
- it was some weird pal/NTSC thing, like ntsc had some more nmi time (However relikk tested on ntsc).

Is it possible to use the French patch on a german rom?
or better asked: Is it worth trying?
or should i just do and then report the results?

With a probability of 90%, no. Also, pev had a hard time with this patch, and we usually don't address pal requests, due to the sheer number of hacks and the work this would require.

i didn´t mean to "request" it.
I was just curious if you had already tested the french/PAL patch on other PAL roms,
like the german one
(since i think to have read that some of you are german).
If you had and it didnt succeed, then i wouldnt have to try.
But with it beeing like it is i will just try and then report later, if or when and where the game crashes..

since you were so kind to support zeldix as patreon, I addressed your wish for a German version, find it here

I only said that i plan on supporting
and that everyone who frequently uses the site (as i do) should..
and thus
i have to go to the bank tomorrow to let my words follow actions

You guys are really unbelievable especially as i didnt request this, but since its here now... THX THX THX THX and billionwise THX

You will hear more from me, i am keen on doing stuff and i will need guidance (like what to do with assembled audio files to create pcm packs for wily wars and where to put or upload that stuff)

That stuff is completely qwerty's business and I can't see who donates. Enjoy the patch, I hope it works

are the *.bat files necessary or are they just "shortcuts" for patching instead of doing so with flips?
for which (ger) rom did you patch (CRC, just to be 100% sure)?
i havent checked with snes9x yet but i just got the regular sound out of the german game/patch regardless what pcm pack i used.
i will update later on this

Just apply the bps with flips

That's what I did for the German patch with the German Rom. Or at least I tried. Sadly it didn't work.
Just the regular sound from the game. Haven't tried on snes9ex yet. Will do so later.
Did the same with the English patch for the USA version.
It Produced a glitch in the opening screen (its just scrambled pixels all over the screen) but after that I skip the screen, the rest works fine..

That's what I did for the German patch with the German Rom. Or at least I tried. Sadly it didn't work.
Just the regular sound from the game. Haven't tried on snes9ex yet. Will do so later.

Do you have a scity-msu1.msu in your folder? For me it works.

Did the same with the English patch for the USA version.
It Produced a glitch in the opening screen (its just scrambled pixels all over the screen) but after that I skip the screen, the rest works fine..

I didn#t touch the english version, and noticed no bug on emu

can i just copy the "scityUs-msu1" file from the english patch?

tried in snes9x v1.6 now.
The mentioned Glitch that appeared on the first screen in the US version on my "FX Pak/SD2SNES" disappeared, so that seems to be normal since the rest works (i havent finished the game yet so i dont know if nothing comes up in the future)

For the German version: i sadly cant get it to work, neither on sd2snes nor on the snes9x emu..
which emu did you use?

The msu file needs only to be present to tell the cpu it is in msu mode. You can simply create a new txt file and rename "Neues Textdokument.txt" into "scity-msu.msu". It is 0 bytes. Of course you can also rename another a msu file from another game. Take care that the extensions are shown, otherwise you maybe produce a scity-msu.msu.txt

Take care that all files (msu and rom name) match the pcm names. All must be exactly the same name! 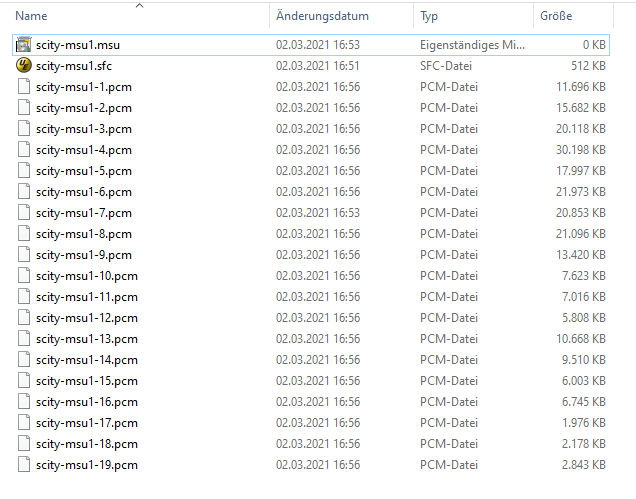 I asked because that's what I did. I just copied the "scityUs-msu1" from the English patched folder,
so it should work.. But it doesn't..
I will try with a fresh file and have a look at the exact file extensions to be sure.
The sd2snes only needs the
*. Msu,
the patched rom/*. Sfc and the
*. Pcm, right?

I can't help you further than I did. Have the folder files as I have them in the image above, the problem is somewhere at your end.

Here's the prove with snesx and track 7 replaced with a Home alone pcm.
https://streamable.com/lxy8gg

I have no Idea what happened or what was wrong, but all of a sudden everything works perfect.
The Ger. version works on SD2SNES and on my EMU (SNES9x).
(The only thing that I really changed was to let my pc show the file extensions, but everything was as it is supposed to be..)

Only the English patch still does this Glitch on the Intro screen, on SD2SNES, but it still works (Though I am not gonna use it)

mh, I re-compiled the US version and used the same free space now that the German/French version uses. Maybe this fixes the sd2snes problem?

Please note that, whenever a bug is reported, I need to check it myself, which takes a lot of time. If it is sd2snes, I need to involve Relikk since I have none. Then there is no sd2snes debugger, so it is kind of guessing.
Means: every bug report is a lot of trouble behind the curtain. It gets depressing if  users report "fake bugs" overambitiously one after the other. Fake bugs cannot be avoided, and it is no problem if their number isn't too high. However, knowing our maintainance trouble, I would kindly ask to double/triple check each problem to verify it is indeed a bug!... Thanks

I will double/triple check in the future.
I do fully understand the trouble, since you already announced that there won't be new games in the near future...
Because of debugging and stuff.. And we want to avoid that as much as possible because I need you guys for other stuff

I plan or want to talk about mega man 2 and 3 for meesen or about help for a wily wars pcm set..
As far as I understand there is a wily wars patch and everything but no pcm pack..
I want to assemble the files but will propably need help to make the to a pcm-set
Or make it directly meesen.. But I know almost nothing about it, and if that would mean making to games from scratch
Then the wily wars solution is the way to go.. But still I need help.
I'd say I have already at least half of the required sound files...
Whom should I ask? Or is it "easy enough" to do it myself?

Jupp, I am retired for this very reason. Making a msu1 asm takes me maybe 10 minutes, but the maintainance years.

We have a mesen forum, but there aren't many hackers here... most are also snes only (Pev, qwerty, zumi, gizaha, me), and specialised to specific games: zumi=pokemon, qwerty=chrono trigger, Link's awakening, gizaha=Killer Instinct, SF2Alpha.

I think for requesting mesen this is the wrong forum. We are more into snes msu1, and also newly MD (arcadeTV). But I would not know of anybody here doing NES Mesen games (Kurrono maybe, but he's also hardly here).

I am a veeeeery big Megaman fan so this is an important topic for me. I think I read somewhere that Kuro said something in that direction that he wanted to continue in that direction but this wasnt a request. Since the only 16 bit version of the NES megaman games is Sega´s "Wily Wars" and the only thing left/needed for the finished project is the PCM´s i will try to do it myself.. If I need help i am not afraid to ask, as you might guess

and then see what can be or has been done with mesen later on..
mesen would be prefered (If its just an enhancement, i dont know enough about it yet) since it was mentioned, that the gameplay in "Wily Wars" is a bit different than in the NES games.. but that is to worry about in the future.
As soon as I am finished with the PCM Packs i will speak up again and ask about how or where to upload that stuff or if it is possible at all because of copyright and stuff...

Did i was mention here about mesen.?? sorry but i ve been far from hacking for awhile ..sorry