* Please verify provided CRC checksums in readme file before using this patch. Please do not re-use old save games. In other words, erase your old SRM files or you will have problems.

*Restored by Pinci. YouTube playlist can be found here.

I appreciate the help. Definitely, no native code was overwritten. Checked a non-patched rom to verify.

What is bothering me is that non-patched ROM is displaying the title correctly. I am at a loss on this.

If the native works, but the msu patched not, the last idea I have is that Alex makes a new folder on his sd card (Sim City try2 or whatever) and again stores a freshly patched rom and pcm:s there.
I know such problems from the emulators where you need to rename the roms sometimes, otherwise an old is loaded or so. In this case there is a minimal chance that the folder or rom gots corrupted on the card.

Then, I'd still ask K or Relikk or whoever to countercheck whether they have the same problem.

Still no problems here. I reset the console five times and restarted the game to see if it was some random thing, nothing iffy happens. This is without the newest patch, also.

Relikk, please try v1.3 to verify I did not break anything.

Will do. I'll report back as soon as I can.

@Relikk Much obliged for testing out the latest version for me. I will leave as is in the link.

@alex_tenjo Only thing left to try is Conn's suggestion (creating a new sd2snes game folder and placing the freshly patched rom and pcms and see if anything changes). At this point, I really do not know what is going on. I also asked Kurrono to test v1.3 as well (waiting on his input).

OK first of all thank you all for the help provided. I have made some tests and the results might be interesting.

I have follow the Conn's suggestion and create a new fresh folder with everything remade but unfortunately nothing has changed (the last revision allow me to launch the game still after the corrupted title screen). I have tried it with my two Super Nintendo, exact same result.

Then, I do what I previously said following another advise and try it with my various Super Famicom. Not a single corrupted title with all of them! Except I have sound issues on one of the unit (I have an idea of what's the problem but I think it's not bind with the screen corruption).

You will find below pictures of my units to help me explaining what I think. 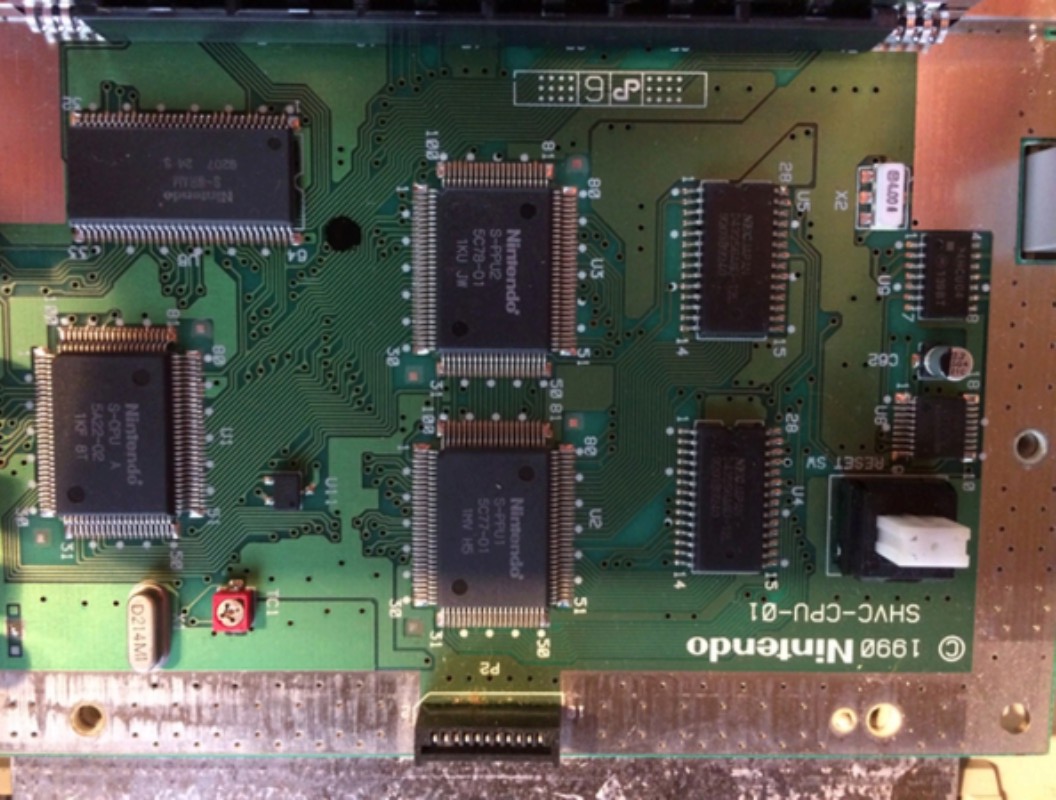 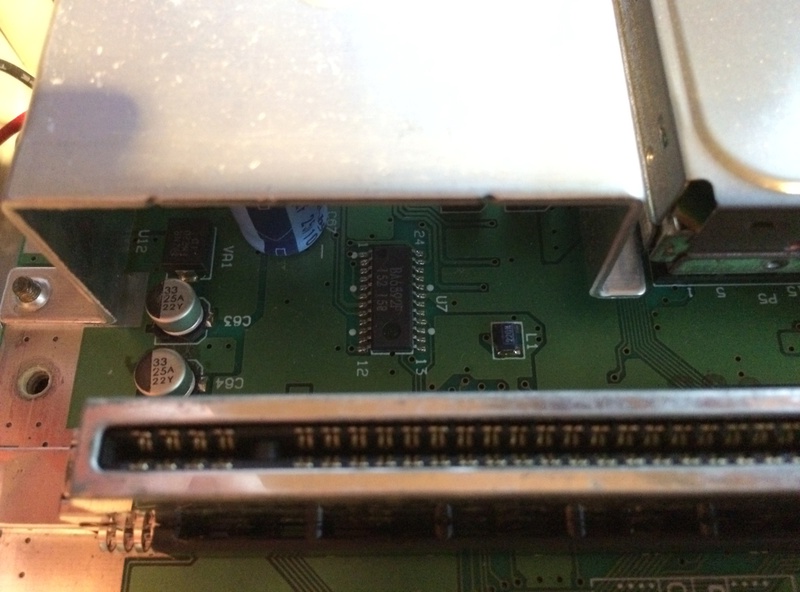 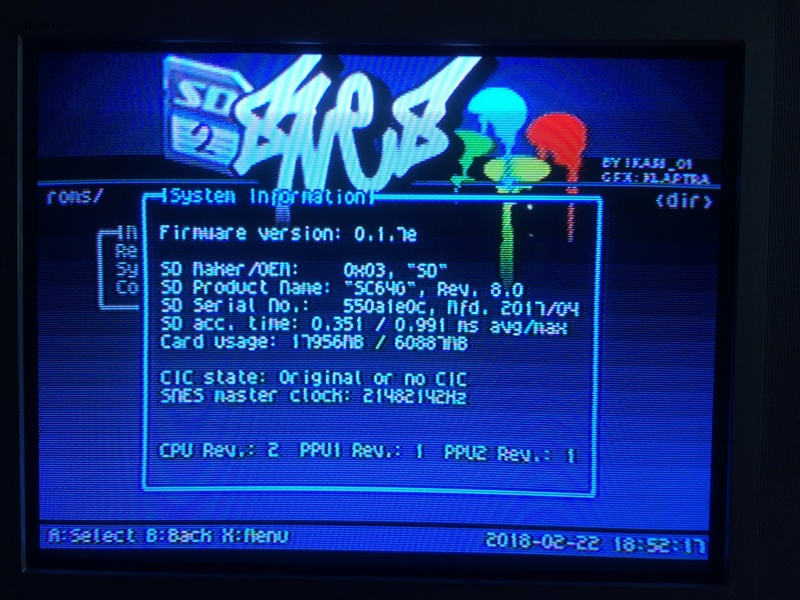 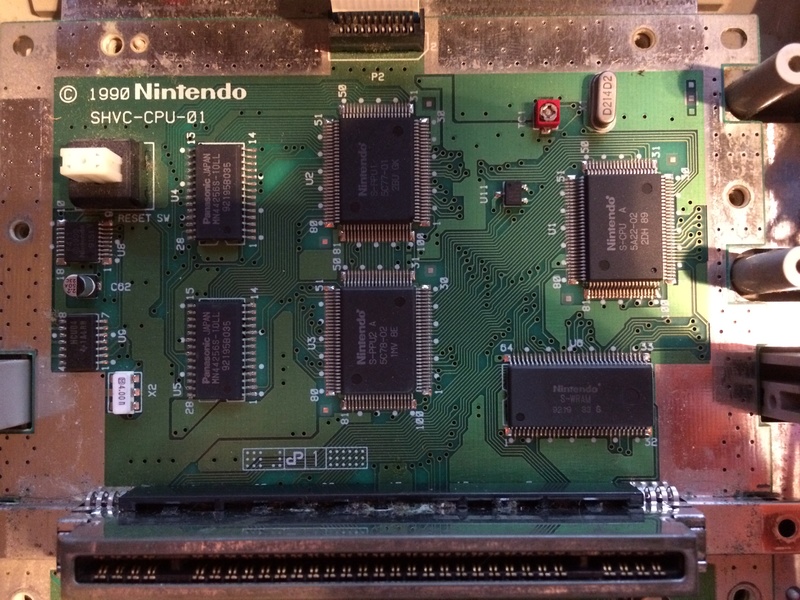 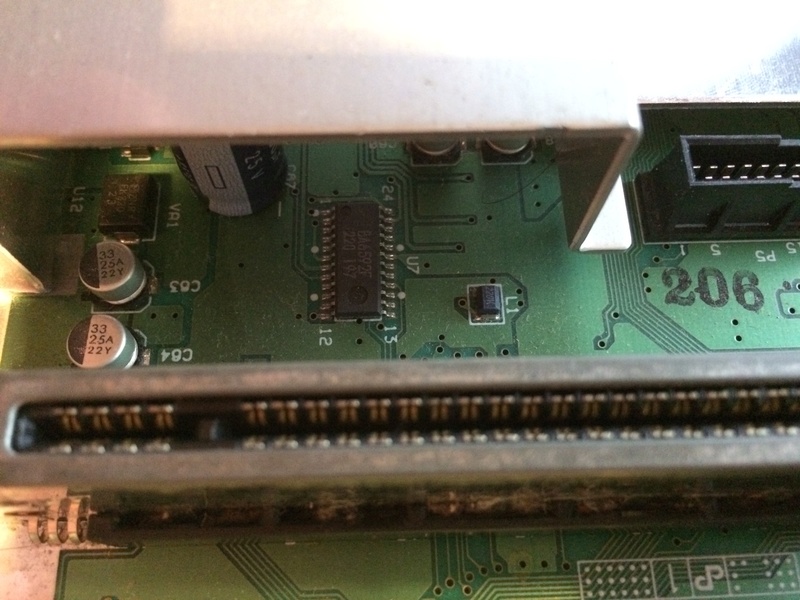 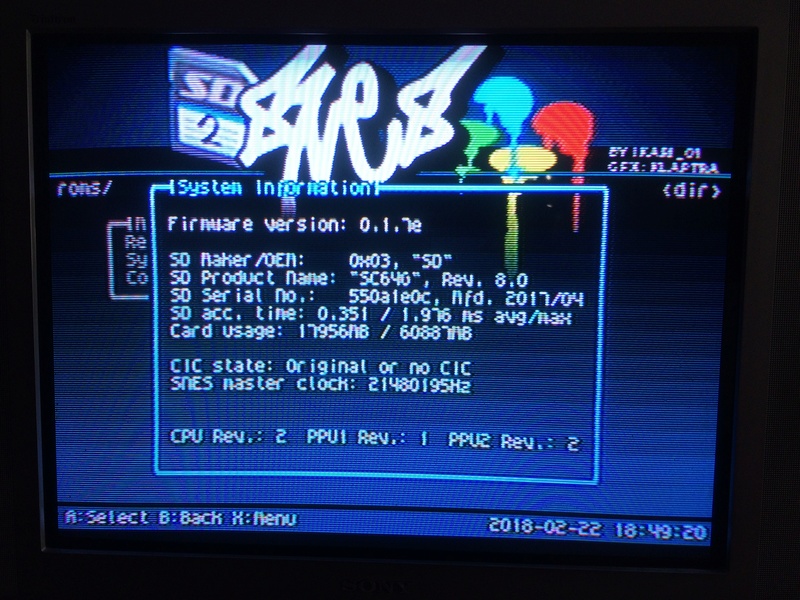 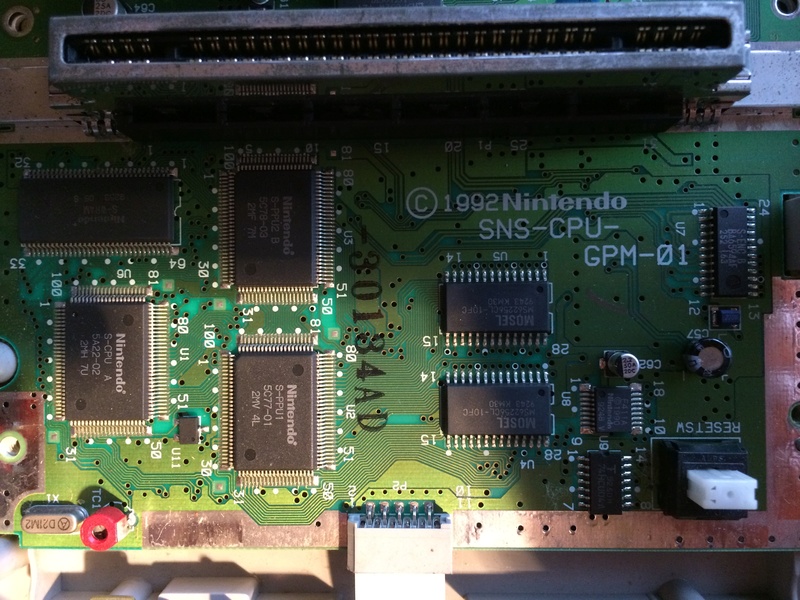 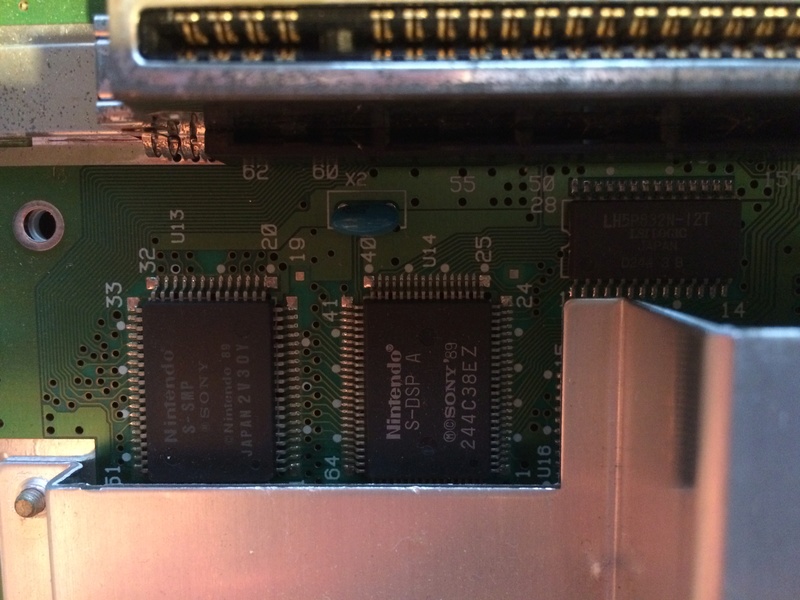 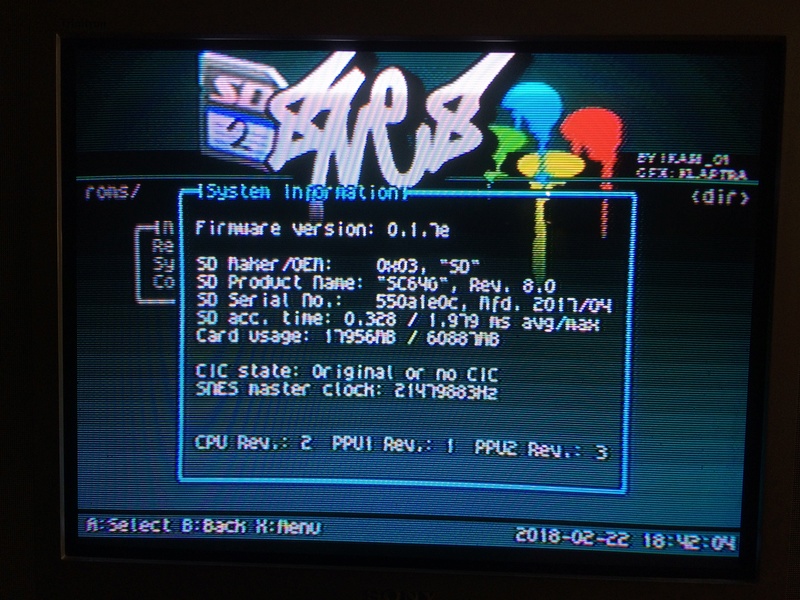 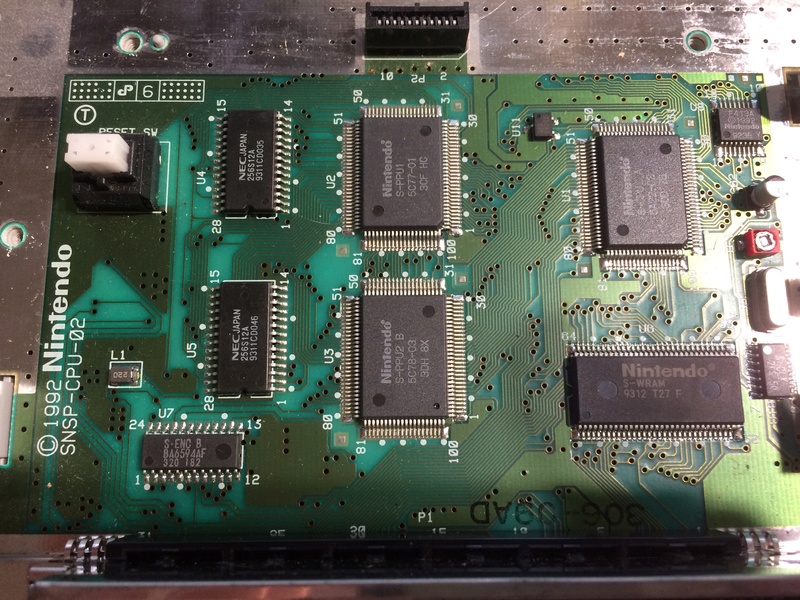 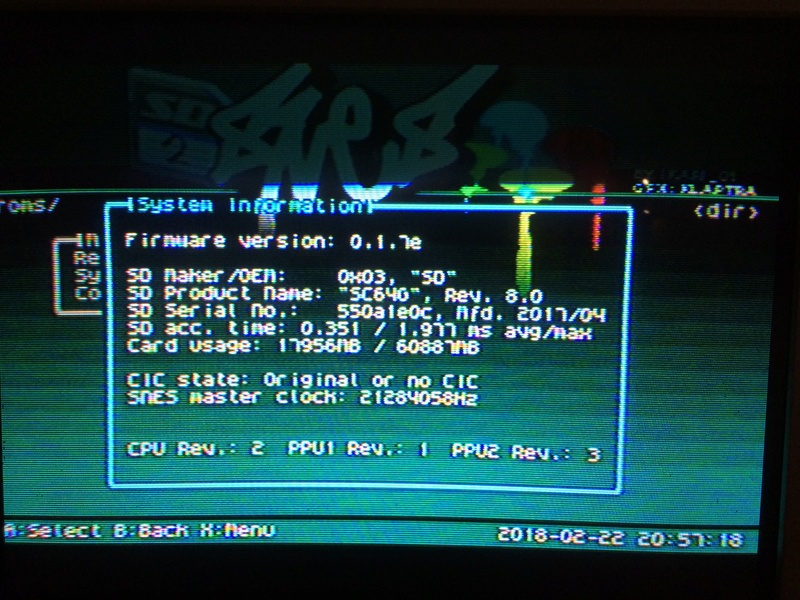 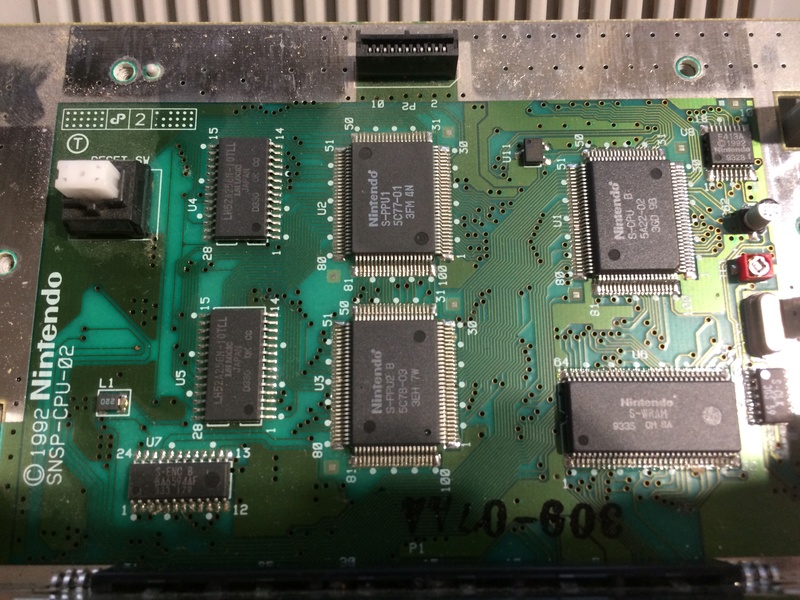 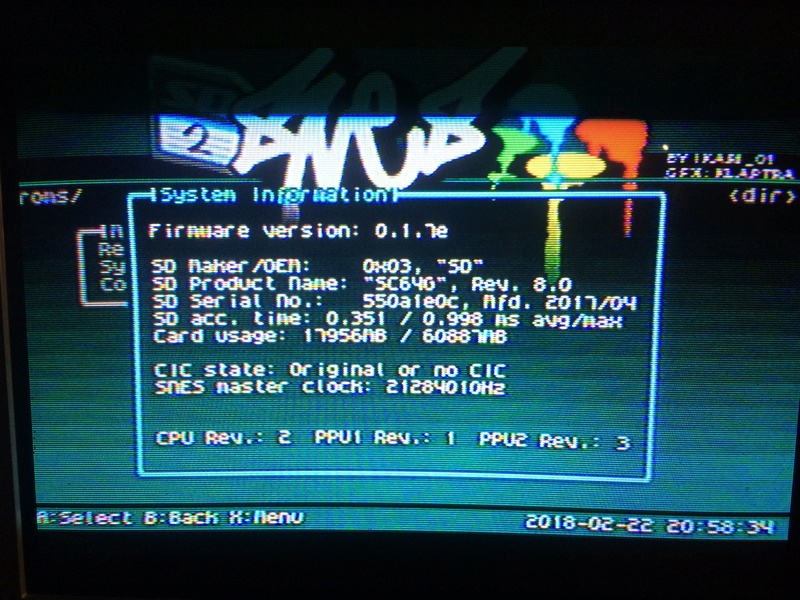 Now to summarize what I think:
Because of the patched version works perfectly on three Super Famciom (I will talk about the sound issue on the third later), and because of the patched version doesn't work on two PAL Super Nintendo should mean that's the problem don't come from the consoles. I also think the problem isn't a defective SD2SNES because I managed to start the game correctly (sound issue excluded) on the three Super Famicom.

My guess is that the corrupted screen could come from two things:
On one hand, PAL console can't handle the patched version of that particular game correctly (because except for Super Mario All Stars flash screen and Final Fight 2 random freezes I don't notice any other problem with all the MSU-1 installed games). On the other hand the problem could be that the SD2SNES may internally have difficulties to handle particular MSU-1 instructions on PAL consoles.

Regarding the sound issue on the my third famicom (I meet the same problem with every MSU-1 game I tested on that particular unit), I think about two possible explanations:
First, a defective unit, but all normal games works perfectly on it. Second a problem with that particular revision of the console and MSU-1 (it's known that later console even if 1Chip console can be consider as better unit has been redesign for production cost reduction, so we might think several capacities could be cut or reduced, but I'm speculating).

Whatever it is this is, I think it could be interesting if someone can test that last patched version on another PAL console (and also another revision if possible), and whatever you did on your last code pepillopev, you managed to improve the result by allow me to start the game.

I haven't test it with my last Super Famicom because I will have to dig for it in my stuff. But I can do it if someone think it could be relevant.

@alex_tenjo Just a simple question, are you using a NTSC version of SimCity? Just asking because my patch was derived from a NTSC clean rom. Also, can you put a link to the ROM you are using as your base (preferably not patched).

Yes pepillopev, as said in my first post: CRC of the original game used: 8AEDD3A1 (it's the CRC of the clean Sim City NTSC (U) [!]). I just play it using a PAL console with the SD2SNES and SuperCIC enable.
But thanks for asking, we never know.

@alex_tenjo Honestly, all I did was move my msu1 code to a different ROM free space location as some of my code destroyed about 4-6 bytes of native code in the original location (I'm surprised it even worked at all for some sd2snes users, even on emulators). I thought that was going to solve your issue but I was wrong (well at least you can play the game now).

As I stated before, my code for this game is very simple and the instructions are pretty basic compared to other games I worked on. Only other thing I can think of is for debugging purposes is remove different lines of my code one at time and retest until the destroyed title graphics go away (time consuming, but only thing I can think of).

No problem pepillopev it's a weird situation and I just want to share, at that point it's not even sure it can be fixable. Thanks for your time anyway.

@alex_tenjo Send me a private PM. We'll discuss it over there. Also, please remove the link.

@Conn I made a quick patch for the French PAL version of the game for alex_tenjo and no title screen corruption at all. It is weird, I thought the sd2snes worked flawlessly between PAL and NTSC consoles? Well, as far as switching to the console's region and playing any region ROM. I could be wrong.

Anyhow, I consider the matter closed. I also read your SMA thread discussion with you and alex_tenjo (very interesting read).

Oh, one more thing, have you had an opportunity to see the zSnes save state for NGT color change?

Then it is indeed a PAL/NTSC problem. Weird and interesting. Good that we know, however

This is an issue however only Ikari can solve, unless we want to port all our hacks for the pal version (with all 4 different main languages (E,Ger,Esp,Fre), which surely isn't on my agenda

Did you send me a zsnes savestate? If yes, I didn't receive one... I have no time and know the game too little to play there - best give it shortly before the screen occurs, and send it per mail or so...

As for the PAL issue, I agree, I only did the patch as a special request. I too, am not planning on making multiple patch versions either.

Already sent you the addresses and the program you need for NGT. Let me know if you encounter problems somehow

Awesome, I'll take a look at it. Once this is done, I'll release NGT with my NES PCMs. I think Kurrono is done with his PCM set as well.

@Conn Weird, did not get your email yet.

Damned it was blocked since I sent you snespal as well (potentially high risk...), and then I had to go to bed before the block message was sent. I sent you a google drive link per mail now, hope you get it this time ^^

I just have to leave a special thank you for this one. I've been playing this since I was in high school. While I have played all of the later versions. I always come back to this one. I keep trying to get a megalopolis and having this enhanced, while true to the original music is so nice on this journey.

The deed is done:

Thanks Shiryu. I will post them to the top as soon as I get home.