Posting this just before I go to bed, but I figured this game would be fairly easy to hack and it seems my suspicions were correct.

I'll do up a patch tomorrow morning, I'll even be able to have SPC fallback.

In the meantime, Here's my WIP track map

For anybody looking to contribute to the track map easily, the currently playing track is in $0153 in CPU ram.
This is written at instruction $00F61B (incoming track number on accumulator)
Modifying the accumulator at this point will play the track number you send instead of the default track.

I think I identified all of the non looping tracks, but do double check, it's late and I'm known to make mistakes.

updated this post wiht the current version of the patch:

Our msu hack industry seem to continue with you

I started trying to put together a PCM pack for this back in May of 2020, but I think there were some missing tracks in the arranged versions. So I lost heart a little and never went back to it, but I can take a look again once the MK hack settles down a bit. But here's what I got at the time... 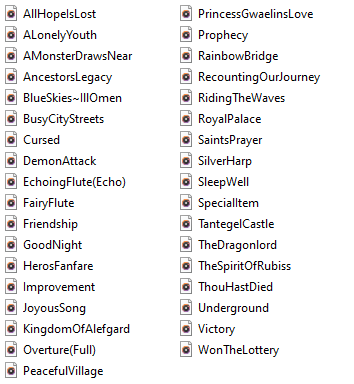 Oh that’s awesome, @Relikk!
I’ll have SPC fallback in the patch so even without a full pack, it won’t be any extra effort.  I checked off the boxes on the track map using your files and there's only a little bit left over...  good work!


Though speaking of: time to get coding.

and @Conn... I dunno that it rests entirely upon me, lol. I can handle the easy stuff now but there's always more to learn.

Lol, you attached a burden to you, there are 6 dragon quests if I recall correctly.

To keep the overview, I added this sub-forum of all patches currently in development (definition: one hacker took up the project, and it isn't officially released to the database yet). As soon one is released into the database we will lock it and move it back to the main development thread

I think that's a really smart move. nice to have current projects highlighted in some way, and it's easier to see things that might need a bit of help getting off the ground.

Well, this is normally where I'd release my patch but i've run into a bit of a snag: my mute seems to break whenever a noloop track is called.. probably the same type of thing as pocky and rocky's map music. waiting for a signal from the APU that says "track done, move on"

So it'll be just a tiny bit longer...

Not tested through the entire game.

Instances of no-loop msu-1 tracks may break the game.
Only specifically fixed the battle victory theme so far.

If you run into an issue, please tell me where and give me a save file or something close to it, etc.

I seem to have found most of the other outstanding tracks and I have 41 files in total now (the dungeons are lumped into one track on the official release, so that's 44 tracks pretty much).

There are 47 tracks in the SPC pack I have, but considering there is an "Overture" that is in two parts in that pack that makes it essentially 45.

Finally, the only thing that I was realistically unable to find is the normal "Echoing Flute". It looks like I might have to do some creative editing there with the "Echo" version by removing the echo and transposing the track down a few cents without losing any quality.

I'll start editing all of the tracks later today.

I’m sure grateful for your expertise @Relikk. It takes me forever to do any of the audio side of the hacking. I’m glad for the help from a skilled person like yourself


something I might note is that "echoing flute" still has a bit of reverb? echo? normally.

it just lacks the part where it is echoed back, so perhaps just cutting it short would work with no need for fancy audio trickery

Didn't have as much time as I thought I would yesterday or today. I have 27 tracks edited, but a lot of those are just the non-looping jingles. 20-ish to go. The orchestral soundtrack requires a lot of splicing as the pieces are a lot longer than the original SPC tracks. Not so much annoying, rather it's just more time consuming than normal. I should have something to show for it tomorrow.

Cubear wrote:something I might note is that "echoing flute" still has a bit of reverb? echo? normally.

it just lacks the part where it is echoed back, so perhaps just cutting it short would work with no need for fancy audio trickery

Yeah, but in the orchestral version the echoes overlap, where the response starts playing over the trailing end of the call, so to speak. On first impression it'll be difficult to cut it off without sounding unnatural, but I'll do my best.

Well, there's certainly no rush. I'm just happy that you're willing to do it at all!

Okay, here's what i ended up with. Give 'em a try. Volume is based purely off of the SPC's.

I'll take a run through DQ1 fairly soon (I've heard it's short)
but right now I'm focused on getting a patch out for all of them.  Thank you for your work, @Relikk, I'm sure many people will appreciate this.

So this happens whenever you start a new game...

Volume warning, it's loud and constant. It doesn't seem to happen when there's an existing character, as far as I'm aware. Deleted the save game SRAM and replicated the issue. Although I'm not 100% sure if the ROM I'm using is the correct one, whether you're using a translation or there's an English version out there somewhere.

only on making a new character.. how odd. Yes, I am using a translation patch but it shouldnt affect this.. I'll look into fixing this after work.
worst case scenario is I wind up hard muting after all

I've modified my mute somewhat. What a strange edge case.

If we run into any other issues I've located a hard mute we can use instead, and just convert SPCs of the like.. two tracks that aren't in the pack.

One comment I may have after just a short moment of testing is that Victory! (dq12_msu-22) could probably stand to be clipped right to the end of the sound if it isn't already, as post-battle it waits for that track to complete before moving on and there's a strange feeling delay with the track the way it is.


Edit: I've fixed the death screen softlock and reposted the patch. I've also tested leveling up and it works as expected. same wiht sleeping in an inn.. the other noloop tracks might be farther in and so i'd like a save if we run into a problem with one at some point.

Cubear wrote:One comment I may have after just a short moment of testing is that Victory! (dq12_msu-22) could probably stand to be clipped right to the end of the sound if it isn't already, as post-battle it waits for that track to complete before moving on and there's a strange feeling delay with the track the way it is.

Sure, try this one.

As a follower of MSU-1, I love the work you are doing.

But as a huge DQ fan I always wondered when DQ would get MSU-1 treatment. I created this account to thank you and will be going through the Patreon steps.

Sounds like you just signed up to test this

Thanks for your kind words. please try to play through it! i've fixed the noloop on battle end, sleeping in an inn, dying, So I THINK the game should be fully playable from front to back. I also did more testing in 1 than in 2... so if we were gonna run into an error it'd either be late in 1 or maybe anywhere in 2

if you do run into an issue, please post in here, maybe attach a save file close to the issue, so i can fix it.

this game is just waiting on a completed playthrough before it gets moved out of beta.

I've removed old file links and updated the first post with the most recent version for clarity's sake.

Another note:
dq12_msu-10 - This track is used for DQ2 world map (before having full party) needs to be swapped as it includes 3 songs (typical of Mr. Sugiyama and his Symphonic Suites).

I did use Audacity to edit it for fun, but I don't know how to enable PCM loop so the track just simply ends

I’ll check into “nothing looping” when I get home in ~6 hours or so. I think I know where I went wrong there and it should be a quick fix

i played through an amount of the game and fast forwarded for several minutes in towns, castle, dungeon, battle, etc and didn't notice any tracks that stopped playing unexpectedly.

it's possible that my "latest version" that i uploaded was old, so i will generate a new IPS based on the version that i tested and reattach it to the first post.

the PCM loops are put into place by the wav2msu or whatever else you might be using to add the proper header to the file for msu1 playback, they don't loop automatically in audacity, etc

loop or not in-game is decided by the code in-game, in code it should send #$03 as a value to $2007 (msu address) to set a looping play, and #$01 for a non-looped play.
if you get really into it, you can set a loop point to a place that is not at the very beginning off the song, in order to have say, an intro that plays before the song, things like that.

Cubear wrote:i played through an amount of the game and fast forwarded for several minutes in towns, castle, dungeon, battle, etc and didn't notice any tracks that stopped playing unexpectedly.

Sorry I should have typed my words carefully

What I meant to say was that the music loops from beginning for the world map songs.  So for example, you are in a dungeon/world map and you enter battle, music changes. You finish a battle, the dungeon/world music should continue from where it left off instead of starting over.  This can get annoying when you level up multiple times.  Everytime you level up it plays the level up song, then world map/dungeon music starts from beginning, then you level up again, repeat.

Hmm. That's still a "me" issue but I'm still somewhat of a novice hacker.

I know there's a way to skip to specific points in the playing track, but I'm not entirely certain on how to use that feature or get the current position of the playing track to store for later etc..

I'll try to look into this at some point