The Legend of Iced Hyrule (Renewed)

The Legend of Iced Hyrule (Renewed)

The patch needs to be applied to a US rom with no header. You need a BPS patcher.

The Legend of Iced Hyrule is the oldest known hack of A Link to the Past in existence, but it is also one of the most broken. Initially released in 2001 or 2002 by richyawyingtmv, it features an ice-themed Light World, a purple-colored Dark World, and was also supposed to include new music and new dungeons. However, only two dungeons were fully completed, and both dungeons had bugs. The overworld designs were nonsensical. The in-game soundtrack was also corrupt.
https://www.zeldix.net/t409-the-legend-of-iced-hyrule

I unfortunately could not remake Iced Hyrule using the original patch provided online because it was so far beyond repair. My only option was to remake Iced Hyrule from scratch, using a clean US rom with no header. Unlike the original Iced Hyrule, the vanilla overworlds in this remake were left intact; however, the Dark World has new snow palettes, and the Misery Mire rain was changed to snow. The game also features new dungeons, Parallel Worlds caves, MSU-1 support, and various bugfixes and quality of life improvements. A few things were unfortunately left out of the final release. For example, I couldn’t get the snow overlay ASM to work on every Dark World screen, I couldn’t edit the in-game text with ZScream, and I couldn’t edit the title screen. Also, note that the Dark World dungeon maps are messed up (the Compass does not correctly display the exact location of the dungeon’s boss on the map, an unfortunate side effect of editing the maps with ZScream). 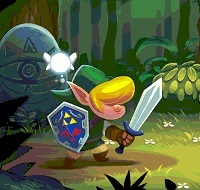 Re: The Legend of Iced Hyrule (Renewed)

Nice work!, thanks for the effort an will definitely enjoy this one as i have never played or seen it before.

Re: The Legend of Iced Hyrule (Renewed)

Thanks for sharing, i really enjoyed playing this version..
Nice subtle changes, sometimes had me going.. hmm well.. this is different... now what. .