but where are the silver Blue2 Woot!! Razz arrows? Crying or Very sad

Obviously at the fairy pond. Check the pyramid entrances.

Oh wow.  I thought I looked in them all lol.

Funny I was able to do all those puzzles then this

Puzz, just want to state again that this is an amazing hack.

altoiddealer wrote:Oh wow.  I thought I looked in them all lol.

Funny I was able to do all those puzzles then this

Puzz, just want to state again that this is an amazing hack.

Thank you and congratulations on solving the game.

okay im stuck on a room. its the one where there is like 5 push able blocks. 4 for removing small fences and 1 for the button switch which opens the door.

ive been on it for hours and cannot for the life of me figure out. will upload video later. 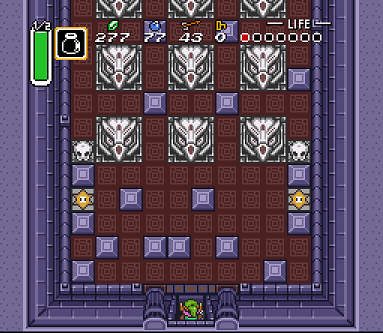 this is the room that i cant beat. i dont get it.

this is the room that i cant beat. i dont get it.

ive been on it for hours and cannot for the life of me figure out.

Spoiler:
One of my better puzzles!
-Note: 8 blocks are pushable all together in this room (4 of them marked with stars).
-Push the right block, which you can reach first - once up.
-Then go left and push the block which you come across once left.
-Now the left-upper block is pushed all the way up. Then you cut the left horizontal fence with it and "park" the stone into dead end.
-Lift the left scull (jar) and push the block once down - to make a passage.
-Solve the remaining stone on the left far up and cut the right horizontal fence with it, then cut the other right fence too = now you are at the upper scull (jar)!

-Main trick: from the upper scull (jar), push the right block far down to the dead end (instead of up).
This is the solution, since with this you have freed both right blocks.
-These 2 right blocks can now cut the remaining 2 vertical fences, and the final fence too, so Link can reach the door.
-Push the only remining-pushable block onto the button to keep the door opened.

Here is my continuation of Puzzlesdudes IQ Test.

And the second part

The 3rd video was just me trying for a while on the puzzle that I was stuck on so I'm not going to be uploading that one to save everyone the time.

So it is strange that you also had the 3rd (non uploaded) video of trying to solve this thing again.

Despite all the incidents regarding this game, I did finally found the time and motivation to bring out and fully test the 2-0 version (it is more like 1-2, but decided to go with 2-0 due to file mapping change to 6MB instead of 8MB). See the edited first post or the edited post in Complete hacks for more info.

Download README on how to use the patch (v2-0)
http://acmlm.kafuka.org/uploader/get.php?id=5075


Guide for this game comming soon, after this the project will be fully over.

After I got stuck I never picked up the game again.

Does this still require modded emu's? If not, I'd like to give it another go on my Powerpak. I never finished the game because I found it to be pretty frustrating after a while (and I also don't like to use emu's for anything but hacking because I prefer the old-school experience).

After I got stuck I never picked up the game again.

In your upper video, you have the problem practically solved. Main error was that move at 25:24.

Does this still require modded emu's? If not, I'd like to give it another go on my Powerpak. I never finished the game because I found it to be pretty frustrating after a while (and I also don't like to use emu's for anything but hacking because I prefer the old-school experience).

No, it doesn't require modded emus. In fact I removed those on the fly in october 2015 with the first re-relese of the 1.01 version. It is however still a specific format, which will require emulation and will not support all possible devices, including Powerpack or sd2snes etc. Read the terms of use/supported emulators/non supported emulators/devices for more info.

SunGodPortal wrote:Okay, so I guess it's still a zip file then... Too bad.

The amount of negativity sent to me by carters and cart affiliated communities since I opened my You tube chanell was so overwhelming, that I decided to close my You tube chanel, rather to be engaged in further flaming/spamming over at You tube as well. And obviously I am not interested in releasing anything unlocked. Devices such as Flash carts, Powerpacks, sd2snes will require pretty much the same format as the repro carts, ie a completely unlocked Rom.

The difference between my zip format and the regular format is that in the second case I would yet again freely serve the game that I worked on for a long time to some random weirdos (like one user over at You tube who looked like a mix of KKK and bike rider) or to cart making companies, who don't even name the authors of the hack, nor are the authors even informed and the cart buyers don't have a clue, who modded the game.

My vision of playing the extinct SNES system in this century is emulation, since real hardware is no longer available or sold. This format and the emulation of it will enforce users into so called "fair use" and "private use" of the product. Again this was done purely out of the shere amount of abuse of my previous work and the absolute lack of respect towards the authors, who made the game, which is being carted in the first place. (These players are not realizing that We gave them the game, not the pirate store which "copy pasted" it onto the cart).

Plus the whole thing is actually gray area, since the copyrights of hacks are impossible to define, since they are split between the original authors and modders, while the original authors did not condone the action in the first place and thus claime exclusive rights to all derivates, which makes the thing problematic all together.

PS
I do have the version which works everywhere, so if you see the IQ hack on a cart on ebay, you'll know that I made it. Not like anyone is going to buy it though.

I've completed this hack before. Any major changes warranting a second play through?

altoiddealer wrote:I've completed this hack before.  Any major changes warranting a second play through?

There was also a mapping slight change to now fit into 6 instead of 8MB, however that does not have an effect on the gameplay.

Mannaged to also make a Guide for this game (PNG guide style) with the Notes to be able to analyse some algorithms and paths as well. I'm glad to see this project completely done.