seph wrote:Just for you Erock, I'm moving all my tiles down so you can see the name when you enter!

This is great! And don't just do this for me, do it for the 40,000 plus players who will be playing the game.

Also, very interesting that the star wars droid is the prayer stone, but those turtles looks way out of place. How about replacing those turtles with X-wing fighter jets from Star Wars! That would fit perfect and I'm sure there is some artwork from some Star Wars game that already exists.

Here I just found an X wing fighter on yahoo image search and scaled it down to fit and replace the turtle shell.

@SePH thanks you for informing me. I always thought that the MSU title was strange.

Conn wrote:Jupp [sic], make a list, describe what I must do to access the bug, Mr.x wants a logo msu, and the msu stuff I added last time is also not working properly, so I'll fix that all in one go.

Thanks a bundle. It's important to note but SePH has added the Kokiri Milk Bar and I made a track for it. If you are already aware, that's great; I just wanted to inform you so you don't have to go back and do it a second time.

Nothing inserted yet, but will be simple enough to do.

If you guys know a little bit about the history of rivality between Apple and Microsoft in the early 90's, then you'll be pleased to know that both Steve Jobs and Bill Gates are going to make special cameo appearrances in the hack!

How you access those special areas is going to be tweaked a bit depending on if you chose the lightside or the darkside ;-)

I'll let you guys find out who are good and evil ones here :-P

This looks like it would be a good idea to watch.

Chris Seavor speaking on if Conker could be made today:

''If it was now and we we had the same team, it wouldn't... I don't think we'd do a game that people would want to play because they'd want the original Conker but again, but we're not the people to make that game - ironically. Because we've changed, my tastes have changed and I've moved on. You'd have a hard time getting it made now.''


Thankfully for you Chris, my current tastes are pretty much the same as when you did that game in the first place. So cheer up! It will be unoficial, but I hope you still get to play this romhack someday... or in another Parallel Universe perhaps!

Thanks for sharing Erock!

It's amazing to note that my romhack has had a similar development over the years. Conker first appeared to the press as a cute little squirrel in Twelve Tales which was going to be much similar to Banjo Kazooie or Mario64... but then halfway though development they dicided to turn the game into a mature game with gore blood, dark comedy and even a giant opera singing turd!

First announced my hack as a sequel to Parallel Worlds... then five years later decided that it would be an unoficial sequel to Conker's Bad Fur Day instead... So much as changed in those years. Met bunch of wonderful hackers along the way. Others just pinching great ideas there and there.

But I'm quite happy about the changes overall. I'm also quite confident this hack will make some headlines when it's done. I'd love to see IGN review this like they once did with the ''super illegal pokémon game that is unofficial but you still have to play'' and other unusual stuff. But that may be asking for too much :-)

Here's a video demonstration on how I add pretty much all my dialogue sentences into the game!

Actually I think the goal should be to gain media attention. If lots of people enjoy rom hacks and they are valued by the public then maybe the companies might be more welcoming of them.

Meanwhile, I've decided to push the beta release date from october until ''it is actually fully finished''.

Meaning I don't know when it'll be done.

I took a one week break from hacking and got so many new ideas it isn't funny. Everytime I take breaks and start working on it again, I have the same weird feeling: ''It could easily take another year to polish things up before releasing it because of the perfection I am aiming for''.

Seph, in all honesty we have to do whatever it takes for the game to be as good as it can be.

Even if it takes another year...

but I wouldn't mind a beta at some point before the final release.

Reworked on my beginning tileset...

...you'll now start in the mushroom kingdom and be able to access peach's castle much much earlier because it will play a bigger role in the long run then simply hosting the final boss battle.

The mushroom kingdom will still be black and white at the beginning and once you healed the land, it will be similar to the picture above, rainbows and all that shit!

In that mushroom kingdom tile set you have above there, do those stars and mushrooms represent solid objects?

I ask this because if they are then they might be obstructions rather more than anything. I player is supposed to roam about somewhat in an open area.

If the area has too many obstacles then it makes it tedious to navigate through.

So what's the story anyway with the game. How did Conker get into this game in the first place... story wise?

Also you should make the falling rock of death mountain into falling smelly turd balls. Big balls of poop.

Sorry for being gross but got the idea from conkers bad fur day.

The area above isn't inserted into the game yet. Its my workspace so things will probably looking much different. Yes those stars are solid objects.

Cant use the falling rocks in the hack since those only work on bigger areas and I have none due to neonswift 2 layers on overworlds hack which works only on small areas.

How Conker got there is explained in the star wars intro dialogue.

It's funny but I never thought the overworlds would first be completed outside of the game via that big overworld image I edit everyday in paint shop pro, before inserting them into the game :-P

But it does fasten up my pace and my motivation stays on top that way.

Nice image, I'm glad to see stuff getting done! I personally like your monochromatic approach to the tileset. It gives the area a creepy as well as nostalgic feel. Also the tilesets are smaller too; is this a callback to Minish Cap or what?

It's supposed to be sloppy. I'm surprised that it's easily readable (at least for me)!

Better get used to it since the old font is gone!

Seriously though, which letters you're having a hard time to read? Maybe you need glasses ;-p

I have an idea, you should include a joke in your hack about the original Conker the squirrel game.

The original name of Conker was Conker's Quest, then retitled Twelve Tales. So maybe make a joke somewhere like:

When Conker opens the chest to get his first tail he says "Oh, boy... don't tell me there will be twelve of these damn things"

"What the fu*k do I look like a squirrel with twelve tails?"

Thanks for the quick idea you just had, afterall it's out of all these ideas that the hack is being made. Had to realize that after you showed me that Conker develloper's video!

Here's an exemple of ending screen that would use an overworld area...

Text isn't final and neither is the font lol

Alright off to some more editing!

LINK: Damn! All I want is to hit that damn Triforce! Get off the way women! 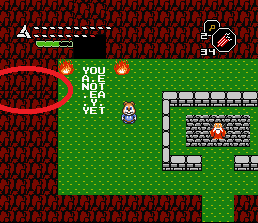 Last I recall, if I changed screens, I simply needed to re-run the correct ending asm file which I happen to still have somewhere.

be sure to use the latest versions, with the 5th sith ending... also, I'm not sure whether you can make your way through dosbox to use the program gif2snesopt... well, we come to it when it comes to it.

As for the msu, I sent you a pm why it probably bugs (same native theme when changing overworlds will not induce a pcm change). I have no idea how I could make a common code to fix the bug. So I have to make that theme change hardcoded, and here I would need to know all possibilities how you can get to an overworld where you need a theme change - for example change from screen 30 to 31, 40 to 41..., use the flute, whirlpool, etc. Therefore, this can only be done at the very end of your progress when we're sure that you won't change the overworld anymore, or better when you have set all screen transitions, flute points and such stuff.

The Sony Substation is a very funny name and idea I like it. That Sony pixel logo though could look just a little better.

If you're going to add themes for your dungeons as well, the umbrella should fit somehow in your mansion

(<- hope you change these smileys soon, https://www.zeldix.net/t749-updated-the-forum-smilies my last post)