Thanks for at least attempting it!

For others, this is how far Conn came:

^ Now, hopefully wiiqwertyuiop will be able to help us out finish it out!

Him or anyone familiar with mode7, I know d4s did hacked some Zelda 3 back in the days and we have all seen what he can do with his mods... but he's probably busy with another out-of-this-world project!

Looks like Conn will manage it on it's own afterall!

He struggled to get the scrolling working but he managed.

We wish him all the best for the rest of the steps :-P

Is that what you were talking about?!

^^only think missing is the actual dialogue :-)

Conn this is amazing!

^^The future is in place!

With the font mostly done, all I need now is create all the dialogue, then Conn can insert it and we'll be able to see the final results!

For others who would like to have Star Wars type of intros in their hacks, this will of course get published along the rest of the single hacks collection :-P

With the story done all it needs is to be inserted

^^I'll probably change that sound overtime, but for now it's going to be that :-P

Thanks, and here's the end results!!!

Conn's work is really astonishing on this one, far above my initial expectations!!

And here's the hack for all wanting to include this intro into their own Project:

Final screen screenshot with Clamp X-1999 image (that anime I have my new avatar from): 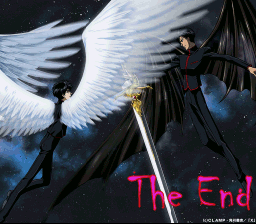 
Hack: Replace intro with an epic Star Wars like mode7 effect
Authors: SePH, Conn
Information: This hack will replace the intro sequence with 2 screens: one static followed by one that uses mode7 to Display graphics in the Star Wars style. 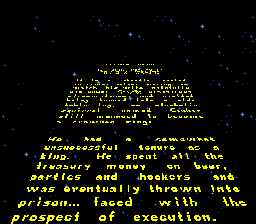 ^^Do note that you won't be able to see it until you have the magic harp which lets you travel between the parallel universes ;0

Both the dungeon and the overworld maps will be drawn directly in the smartphone menu in a way that will be similar to this:

Very nice and cool! Your hack is getting there!

The flute map Looks wonderful, however it will be hard to orientate... wouldn't it be better to make it themed to better distinguish where you are - making the wasteland Points look like wastelands, the modern City area look like modern City and so? A part of your Image would perfectly suit for the space Region though.

I remember when I first saw that iphone menu and I was like (what? in Zelda?? thats kind of odd) and now I LOVE IT <3

The crazy thing about your hack Seph is that you have all of these odd ball things in your hack like star wars references, conker the squirrel, super mario bros references and so on and the strange thing is that it all seems to fit seamlessly together to make one outstanding adventure.

I just made a small mock-up map how I'd imagine the flute map (of course it isn't possible in this Quality - but your Mario map was quite good actually). As said, the current map Looks wonderful, but it gives as good as no Information to orientate where you are and where you like to be.

btw: flute Point 6 can be placed somewhere else, since flute Point 9 can be accessed anytime by the key now 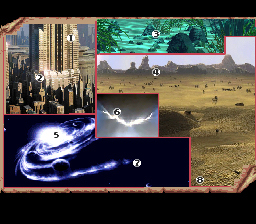 Thanks Erock! I still know many people will have a hard time accepting Conker as the hero, but in time I'm hopeful the general crowd will change their minds and PU and it'll become a cult classic eventually... if people still play romhacks 100 years from now that is lol <<---but then humans still do things they did a thousand years ago, so why not

Conn, IT is easily possible in this quality since the world map has 128 colors! Maybe we could reduce the colors so we can add all the tiles...

BUT then... I can't add this much custom tiles, see:

I once thought about making that screen load a 256colors gif image similar to what you did with the intro and ending screens but didn't want to bugger you about it as I felt the world map was enough good as is! Don't feel any pressure to do it right now, take a break man ;-P

Having a picture similar to that one above would be mostly impressive! Such an hack would help more then one person, that's for sure.

lol at number 6! Did you watch Doctor Who actually, or did you just come by it by pure coincidence! That's the same friggin' amazing scar from the fifth season and the last episode that was played from math smith!

The other pictures are all amazing too, good choices!

*lol, The number 6 was pure coincidence ^^

The Problem is (like with the intro I made for you), that in mode 7 you can only have 256 tiles and 128 Colors. I cannot use my technique to insert 256 Color gif Images, since
(1) it has the mode7 restrictions, which even if I ocercome, we fail on
(2) the sprites (selectable flute-Points) are not visible in such a Screen

However, I reduced the Image Color to 128 Colors and it still Looks good:

The only Problem is, when I converted the image to snes tiles, there are 628 in this gif. But I am sure, that with some repeating techniques we'd come to 256 total tiles more or less easily...

Since I am only the Time-out needing coding-wizard and you the tile-wizard...

are you able to make such an pic with only 256 tiles?

I imgine something like this (I admit really bad made) mock-up pic:

I'll try, but can't promise anything. I just count and theres like 256 free tiles already and 128colors, so no asm is needed here... just need to work out around the limitations!

Yes, we unfortunately have no other choice due to the limitations

) and my pics are just an example. maybe you find better and easier Images by looking into other snes roms and take the tiles from there or Google "Flash" for the rift, wastelands, Skyscrapers or town for modern world, "atlantis" for underwater... and you surely get some nice templates

Conn I really like that flue screen with all the different level sections in it. Did you or seph make that?

I agree with seeing all the different worlds and not just a big space map because it gives the player a sense of direction. They can actually see the different areas.

and yes, having sort of orientation was also my Motivation to make this mock-up pic.

^^I'll have to separate the tiles so I can re-use them as much as possible!

Also remember how Gamemaker drew a map for his zelda 1 hack. Like a hand drawn map.

Maybe... possibly get an artist to do some additional artwork outside of the game and do a map like GM's but only for PU.

I personally would like to have additional artwork for Calatia when it gets done even if I have to hire an artist.

The extra art could go into the instruction manual. You could print it out like a regular snes game manual or just make the manual PDF.

I think the more authentic your game is to being a real snes game the better.

But of course that would come later in the final stages of the hack/game.

I just realized that you have 16x16 tiles; technically you'd have one tile/ overworld Screen. Since it is mode 7 64x64 tiles are displayed on Screen. This means that one overworld Screen is 4 tiles on the map (2 vertical, 2 horizontal) and on average, 1 tile must repeat 4 times.
Maybe this helps as orientation.

If you have the tile place left, you could also insert houses like the triforce temple (btw, one flute Point like the Point 6 could lead there, since you only get the flute when successfully beaten it)

The music resets at 5:32 I believe it's because that I haven't changed this yet:

It is to be noted that mostly all songs that come with copyrights won't be bundled with the msu-1 pack that will be released in a separate zip filled to the hack.

I'll instead distribute an msu-1 pack that comes with Royalty Free music that can be found on the internet. That way I'll avoid getting sued by the companies that own those songs!

Besides theres a bunch of free music epic on the net, you'd be surprised

In the msu-1 addon readme, I'll tell the players how to change the music tracks in the hack, so that they can ear the music that they prefer!

yeah, a table match should fix this Problem... you could also try Looping the themes with the wav2pcm I gave you the link to, then you can have an introduction and then the Looping main theme (as many themes in the Rom are).

Also nice is that you have all the small effect themes. Zapping with tardis key could make Conker say "oooh woooah", getting the harp (master sword) a "that's freaky" and facing Ganon (1e) a "oh shit". Or whatever you like.

Maybe you can also use the Crystal theme for the triforce shrine overworld Screens (it is unused), this theme is a bit montonue, but for one Screen it is ok. This way you have a wav more. I't not the use the summon guards however since this is very shrill and some Players will use the native spc