my questions still apply, did anyone try to contact the creators of hyrule magic and what did they say did they forbid work on it? did they refuse to release code? or could they just never be contacted?......it seems to decompile fine with "Rec Studio 4.0" though it does look very complex.

kgp4death wrote:my questions still apply, did anyone try to contact the creators of hyrule magic and what did they say did they forbid work on it? did they refuse to release code? or could they just never be contacted?......it seems to decompile fine with "Rec Studio 4.0" though it does look very complex.

The author of HM doesn't want to make the source code public. Sephiroth3 (the author of HM), (which is not SePH) gave this code to Math On Napkins years ago and vanished from the Internet. MoN needed to promise not to release or edit nor release the edited version of the source code. MoN got tired of those restrictions and started to work on his own editor Black magic.

Decompiling HM will not help. You would just gain the list of opcodes and their documentation, which is far from the actual source code.

I think HM is its own problem. The author made it with a lot of bugs and won't allow others to fix them (irony).

PS
It is not just HM's fault. It is the combination between the HM and the original Alttp. You would have to severely edit the game in a right way to be able to use it correctly with HM. For instance, if the game would have 100 indoor rooms: from 000 to 099, (while the rom would still have the space for all 295 rooms), HM's dungeon editor would do just fine and would probably never bug out.

wow that sucks why even make a program for the community if you do not believe in the community......as an actual programmer i have the right to say that.

We did have a debate a while back about MoN publishing the source code and proclaim the promise, which is years old (around 5-7 years), as obsolete. The whole thing ended with the result "status quo". So the source was not released.

I'm guessing the programer didn't want for anyone to edit his work, despite the fact that we could make a better program.

i mean the program basically allows one to make an ips file to use on zelda, so releasing an ips/patch to use on hyrule magic is 100% fair i would think (without releasing code to everyone if he really thinks his code is that valuable).....and knowing mathonnapkins like i would like to think i know him i am sure he already looked into and fixed like at least a dozens problems in the program just for intellectual exercise if nothing else.

SePH, if you can connect Sound effects with monologues, what do you think about a sfx whenever somebody says !@€!!@ in Conker?
Dunno however if a suitable sfx exists for this (like censor *beeep)

Hey good idea, haven't tough of that one!

There are two programs listed in the compendium that sound interesting but I have no idea where to find them:

Originally put this in a different thread but deleted it. I hadn't made enough use of this site in the past two months so I had forgotten where this thread even was.

1) What makes the player go from the waterway to the area under the bridge where the bum with the tent lives? I'd like to use that somewhere else if I can.

2) Does anyone know if there is a limit to how many entrances you can place on one screen of the overworld? The hack I'm focusing on right now is going to be a more heavily populated area than the original game. You know, like a small city or something.

1. What I can recall, there was a special block tile that you touch that takes you to the the master sword+under the bridge area. I don't remember how to change it ATM but it's in my Charmy Needs Help thread, I think. You can find the thread here: Link

2. AFAIK, not really, except for the number of entrances in the entire game.

1A) Ah ok. I'll have to do some experimenting then. That sucks about the "no entrances" thing. One of the main reasons I was wanting to use that area was to place a cave under there.

I have a few more questions. I believe some of the answers may be lurking around here somewhere but until I find them I'm going to post these here anyway in case they can not be found. If I do find them before anyone replies I'll edit the post.

1B) How can I edit the amount of damage that certain items inflict? I'm mainly concerned about the arrows, fire rod and hammer, though depending on certain factors I may need to tweek others. I noticed there's some relevant info in this thread (stronger sword beam) but here they are only talking about the sword beam and the silver arrows.

2B) How can I prevent Link's uncle from giving you the sword and shield? I don't want the main character to obtain a sword or shield until they find them on their own. I want them to use bees and magic items in the meantime. This thread (replacement of items handed over by characters) addresses some of the items handed over by other characters but not the one I'm looking for. I would even worry about this were it not for the fact that you can't seem to save until meeting your uncle.

3B) How can I edit the magic useage of each item? I'd like for the game to rely heavily on magic items but I need to find a balance between how much magic an item uses and how fast I set the speed of the auto magic refill. I know how to do the second part because I've done that a zillion times. Are all of the values for magic useage in one area or are they contained within each individual item's code?

4) How can I prevent bombs from hurting Link? I know there's a patch on this site that disables bomb jumping but I don't want to disable that, I just want to disable or at the very least, severly limit the damage caused by the bombs. I assume this would be controlled by one byte.

Is there an easy way to make Link's bombs cause no damage to him, but still launch him backwards and still cause damage to enemies?

Would it be as easy as making alterations to this?

I've asked a similar question before and I'm still curious about this. Basically, I WANT bomb jumping as a feature in my hack. To make this less cheap for the player I want to give them infinite bombs and have bombs do no damage to them. I already know the hex change necessary for infinite bombs. It's in my notes somewhere and I'll have to find it. Otherwise I would share it here.

I'm still in the dark about the bomb damage to Link though. Is this something that can be changed in Hyrule Add Ons without ruining the bombs use as a weapon?

I've tested this out and it works. You are pushed back by the bomb, but Link takes no damage. Good job... as always.

Now I can continue my dungeon designs in confidence.

It's just a Game Genie code that was converted to hex. Since bomb jumping will be required at times I don't want the player to have to stop what they are doing just to farm items.

Anyone know of any special criteria for placing a triceratops? I put one in a dungeon as a test and all it does is walk back and forth. It never spits any fire.

Anyone know of any special criteria for placing a triceratops? I put one in a dungeon as a test and all it does is walk back and forth. It never spits any fire.

This behaviour is normal. It seems as the sprite needs more room. However in some rooms he doesn't seem to spit fire by default. It also seems like the game is "choosing" this the way it chooses for the Stalfos sprite to be normal (blue head) or read one (returns the bone-shoot) - no known logic on how this is choosen.

So does that mean it's safe to use the screen editors if your ROM is already expanded (so it doesn't create an odd size) and there is no data in that particular spot to be overwritten? I've been afraid to use these parts of HM because what I had previously heard made me assume that it just messes up a bunch of stuff. This makes it sound like these parts are still safe and predictable, albeit quirky.

Unfortunately no. It is never safe to edit title screens or any other screen. Backups are vital here. HM might also auto-shrink the rom back to the odd size just over 1MB destroying all code above this address, even all ASM and all code in general repointed to the new expanded space.

I edit screens on separate roms and for this task only and then transfer code in hex.

The stalfos colors depends on the x and y positions. Move it around the room and theyll change of type.

હેદρમ™ wrote:The stalfos colors depends on the x and y positions. Move it around the room and theyll change of type.

Good to know. I didn't know that. Will try it out.

Anyone remember what determines whether the key that is dropped by the enemy is a big or a small key? The sprite you add for either is just "Key".

EDIT: Nevermind. I finally found the info I was looking for.

Interesting HM bug: So I got careless and decided to delete everything from a room I knew I wasn't going to use. When I went to test the game, not only did it delete everything in that room, it deleted everything in Link's house as well except for the uncle and items and changed all of the scrolling and start postion specs to that of the room I emptied (the room where Link's uncle gives the sword). It also placed the chest in Link's house in the same spot as I left it in the other room and copied the layout. Good thing I've already learned my lesson about HM and backups. 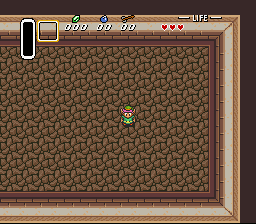 Okay. Nevermind. What I was asking for above would be cool for atmospherics, but I now realize that I don't actually need it. The only reason the question came up was because I didn't have a proper understanding of how the graphics schemes work (or at least how flexible they were). I can accomplish my main objective here (the use of objects such as 050, 07C, F8A-F8C, etc. in my current dungeon) by using the same Main Blockset but selecting different Room/Sprite/Enemy Blocksets.

Nice, on the further note: if you take a look at the object which was made in the IQ hack in the last dungeon called Rabbit hole, you can see that it had to be made additionally, since no such "jumping" object exists. Which basically means you can "fill" the existing objects with new tiles from the gfx and even add new properties (in my case the tile with the property to initiate the jump).