Admin Edit:
This thread is still getting a fair amount of traffic and is causing confusion for some users because of the multiple versions of both the hack and the music conversion script available.  See this post for more information about the different versions, and see the project page for download links. Hope this helps with any confusion.


I know DarkShock released a WIP of his Chrono Trigger MSU-1 patch, but I haven't been able to find a compiled .ips version with manifest.bml and a doc explaining which pcm track is which song.

Does anyone have a compiled .ips version (preferrably with a manifest.bml and an .ips with the volume lowered for bsnes)?

i think Darkshock is busy be patient

Yes he is..I'm waiting for actraiser from him..I got to wait too..if I know how to do ask..I'll hack games too..for now ..I wish..so wait is the answer

kurrono wrote:You can patch the .asm file with asar 1.36 to the rom

That's all well and good, but I still don't know what track numbers are what for the manifest.bml.

i guess u have to create manifest.bml..it's not on the files... u

creating a manifest is simple, here's for f-zero. Make it the same way for chrono trigger. Import the game in higan
- go into the folder  %USERPROFILE%\Emulation\Super Famicom\f-zero_msu1.sfc in Windows Explorer and open existing manifest.bml in a text editor

These lines are automatically created by higan. This is for f-zero, the code for chrone trigger looks of course different. Keep the lines:

Then add these lines below:

Ususally higan plays track-1.pcm as theme one track-2.pcm as two and so on. You need to rename them into this default format. Alternatively, as I did in f-zero you can addressed the name as well in the manifest.bml to play the same files as sd2snes and bsnes do:

If it doesn't work you need to check whether you have some spaces or whatever. Unfortunately higan (or bml) is very strict with the syntax.

There is no IPS patch because the patch is not ready yet for public consumption.

Right now I'm "editing" the music to loop, in fact I'm writing a batch file that uses SOX to trim and boost the volume of the songs decoded from the FLAC. Unlike Super Metroid, Blake Robinson can't let me distribute the pack because of a license deal with Square Enix.

After music editing, I will rewrite the fade system and fix all the bugs.

Hey guys, don't forget to check out this thread:

Thanks for the news, is it based upon DarkShock's patch?
Edit: no, seems like he created his own version, makes me wonder why people make redundant work and concurring instead of helping each other.

Yes, I hope that my zelda fmv implementation would also inspire more hacks here as well.
To date the video is only featured in ALTTP, and bszelda (video finished but the voice actors need some more time - Erock, when's your next time-off? I think/hope we can start with bszelda1 in 2 weeks, thereafter we need the AST stuff and your records must also be filtered by TheRetromancer from background rustlings before we can merge them).

Conn wrote:seems like he created his own version, makes me wonder why people make redundant work and concurring instead of helping each other.

I believe he wasn't aware of the CD patch by DS, but that doesn't matter anyway, I myself was capable to merge both the patches and ended up with the two working just fine in here, video and orchestrated soundtrack

Conn wrote:Thanks for the news, is it based upon DarkShock's patch?
Edit: no, seems like he created his own version, makes me wonder why people make redundant work and concurring instead of helping each other.

It is based on the older proof-of-concept using a older version of the MSU-1 when it was called 21XX.

Also this only add video for the attract mode, for the patch to be complete it would all videos from the PS1 version.

Yes, I made some thoughts about splitting up a video. It's theoretically possible since the msu video gets a counter in the X-register (at least in Ikari Player). So technically you can make a msu video with all cutscreens merged and jump to and from the video with specific X-register values. Problematic is that the vram and hardware registers get overwritten. So this will be a lot! of tinkering.

The player used by Ramsis appear to have some flaws (he states that the the screen jiggles in the german thread:
http://www.snesfreaks.com/forum/viewtopic.php?f=157&t=14520
No wonder, the snes hardware is limited. The larger the fmv screen is, the lower the fps. For this reason I use Ikari player, Ramsis uses 21fx or something.

Anyways, I'll point Ramsis to this thread. It would be complete madness if he and DS make this effort parallel and twice. Maybe there's the chance of team work?

Colines wrote:Ramsis (another MSU-1 rom hacker badass) managed to reimplement the PSX opening of CT to the SNES rom =D

Thanks (although most of he credit should go to smkdan).

Colines wrote:I believe he wasn't aware of the CD patch by DS

That's true. And yes, I simply "ported" smkdan's ancient 21fx patch to MSU1 by disassembling and reworking his code. I didn't know that somebody else was working on MSU1 enhancements for CT at that time, so I must admit I'm totally confused about all that hostile "redundant work", "concurring instead of helping each other", and "madness" talk.

To conclude, I have zero capacity to work on CT at the current time, so please feel free to do that on your own. You're even welcome (and supposed) to use the source files included within the package I released.

Hi and welcome to these forums. It's too bad you have zero capacities to work further with CT.
Anyways, currently I know of only 5 msu1 hackers, that would be you, Mattrizzle, DS, LuigiBlood and me. It would be in any case reasonable for anybody to check whether a patch already is released (DS and I usually release on romhacking.net, here and on git). Also google and youtube search may help.

What is missing is a global platform with all msu-hacks released, maybe romhacking.net would be the best place for this.
I also released some lists, e.g., here
https://sd2snes.de/blog/cool-stuff
but as you see it gets outdated pretty fast (secret of mana, f-zero are missing e.g,)

I have good news, music editing is now complete ! Still no IPS patch because the hack is still quite buggy.

For those who like the bleeding edge, I submitted the changes to the Github: https://github.com/mlarouche/ChronoTrigger-MSU1

Run make_music_pack.bat to create the music pack, you will need flac.exe and SoX installed in your PATH (http://sox.sourceforge.net/)

I finally took some time to work on the Chrono Trigger hack ! 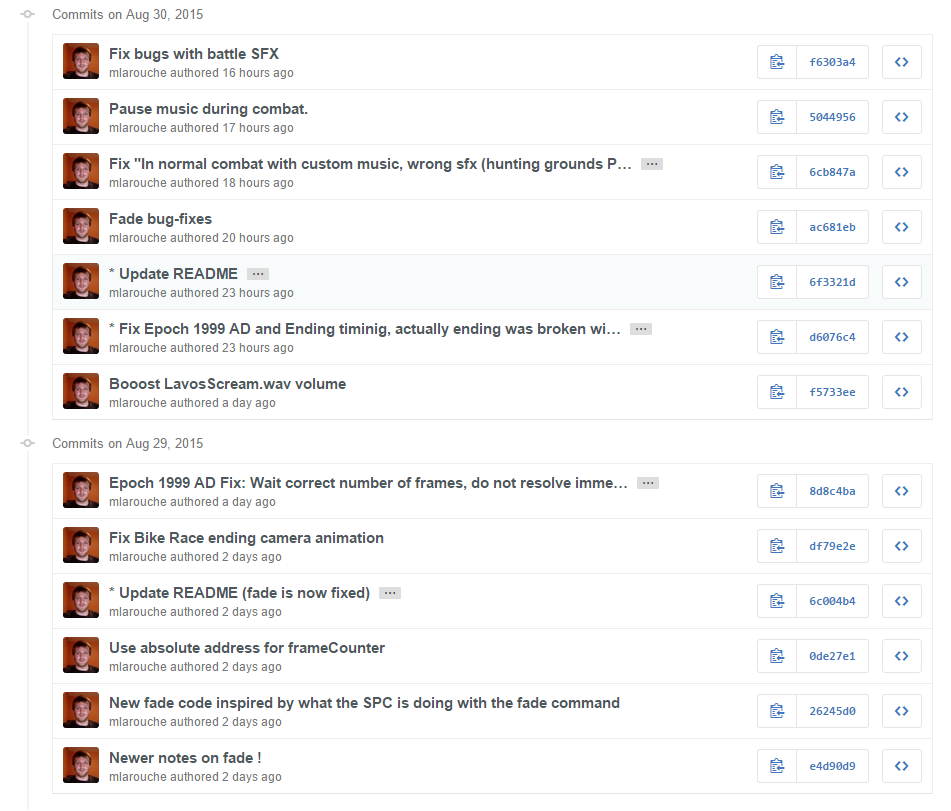 With this, all the major issues has been fixed and right now I'm doing another playthrough, and so far I've noticed mostly music editing issue that can be resolved easily.

If I don't find any major issue after this playthrough, the patch should be out soon !

Well a video i like to share chrono trigger with intro video with ur msu1 patch DS...
https://www.youtube.com/watch?v=3J3FQV-t8qw

Like Melchior said: "Sorry to keep you waiting." The patch is finally released !! I got tired of waiting for romhacking queue so I decided to release it myself.

Here's the trailer for it


The patch is available here: https://www.mediafire.com/?6qsyi0tc18sizjv

And you have to buy (yes BUY) the 3 Chrono Symphony album here in FLAC format: https://loudr.fm/release/chrono-trigger-symphony-vol-1/BFe5n

I updated the entry in the msu1 database:
https://www.zeldix.net/t808-chrono-trigger#8894

I was having a bit of trouble getting this up and running, thought I'd share in case anyone else runs into issues.

When running the make_music_pack I was first getting a "zlib1.dll" is missing error. After I got that sorted, I was getting "inflateReset2 could not be located in dynamic link library libpng16-16.dll" So, the easy solution to both problems for me was to use the link in the readme to download SOX, just dropped it all into the ChronoTrigger_MSU1 folder and restarted the whole process. Went through without an issue.

One other random user error tip, keep the FLAC files in their separate folders. I was dropping all the individual flac files into the folder, which doesn't work.

Any way. Thanks for all your hard work, DarkShock. This will be my first time actually playing this game on actual SNES hardware as opposed to emulators and DS.

To get it work u have to on control panel and add .bat that is unknown to. Cmd or command.Itgave hard time and i re-edited some bat files too..to make it work...

ok i got the 3 albums in flac format. I put them all into a seperate folder.. now i keep getting this error whenever I try to run make_muic_pack.bat 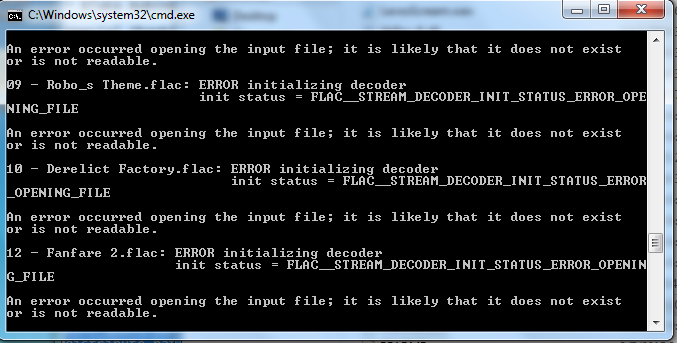 Damn right I had that problem.... yes indeed..but I already got my chrono trigger working even with that fmv video as chrono_msu1.msu and chrono_msu1-0.pcm as audio..

Then to fix that problem you got to go to Control Panel, Default programs, then Associate a file type or protocol with a program..

Then find .bat that is for unknown application.. I changed to command or cmd...
I restarted the pc and try compile the flac audio again..