As I was saying with "asm" to tinker the speed - what I was thinking was hacking the speed 05 tag to be like speed 03 (as an example).

Won't touch the waits as they're as intended. It's mainly text display speed I'm concerned about.

What I am interested in is if speed 04/03/02/01 tags are used in the monologue at all - if it's always speed 5, then it's an easy replace in the text reading routine which I'm already hacking when giving more space to the monologues.

Check out this awesome altp image

I'll add that to my never ending to do list Euclid although I'll probably do it last and focus on the more important matters like the overworlds, dungeons and remaining asm.

Two new music tracks I made, they need a little bit of work still. They're in CD quality:
http://www.file-upload.net/download-11711734/TrovskyFLStudio.zip.html

I plan on these replacing some original tracks I made.

Ambience v4 - Very dark mood! I feel like I'm following some trails of blood or something, very Sephiroth like

Guitar v5 - Feels like I'm in some electronic danceclub with Zora Link playing the Guitar of Waves or something!

Euclid wrote:i am a fan of those text areas, cool idea!

I'll probably add a third text adventure game area to speed up my overworlds finishing process. So if any of guys got any more ideas regarding those, now would be the time!

I'm in vacation in two weeks and only work like three days instead of four next week because of canada's day so....3 more days of work and I'll finish up those damn overworlds!!

I'll do overworlds maps right after and maybe that new title screen for conn so he can get it out of his mind!

I say find a really popular text adventure game and do a funny parody of it.

And what? A new title screen?

Just going to replace Conker's girlfriend with Tingle since she won't be in the game anymore, except the 2nd best ending.

No longer need to have her on the title screen then.

Thats a minor change but one that I keep pushing because I wanna complete other tasks first.

I gotta start stopping adding new things since I no longer have any gfx space to add new things. Its pretty much maxed out, so in order to release it in december I'll cut down stuff I wanted to add, easy as that. My to do list is way too long and it'll take several more years if I wanted to implement it all and I don't have several more years to dedicate to this project...only a few more months!

Or for new text area either a funny parody or just a cool original idea.

Still awaiting on your awesome ideas

I have currently used 6 out of the 8 whirlpools.

I'm reserving one for the stargate and the last one will be used for an additional text adventure area.

It doesn't need to be linked to the other two text adventure areas, it can be standalone and used anywhere in the game as a link between areas.

Make one a dive-through whirlpool, to have gain of the fairy flippers. Place a heart container behind or whatever.

Totally forgot about those.

^^Will make something for it in this case.

Will probably hide the stargate using this technique, which will warp you to the macintosh area...where you'll meet master jedi Steve Jobs, who will warn you about the evil sith lord Bill Gates! And give you a heart container and one of the rings!


If you instead take the warp, without going under using the gold scale, it will warp you to the windows area where you'll be greeted by sith lord Bill Gates in an adventure text area with an hole leading to the windows area and another one leading you back into ancient hyrule.

(just want to have my codes exploited as much as possible

^^Yeah those are already in the to do list!

The icerod freezing water blocks has been added in the lost desert area, youll need to find it in order to enter the Triforce Shrine: 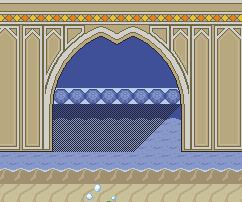 Will edit the blocks into something else later.

Superbomb already used once on the bomb-omb painting.

Digable hearts will be more tricky as I don't think I have grass anywhere except only in the same screen where you get the digable deku seed.

You couldn't have made Steve jobs the bad sith guy because he's dead. And people would then hate on u for that.

I dunno, in lttp there's only one very specific grass tile thats diggable

We all know bill gates is evil and copied steve jobs ideas, this is fact!

Meanwhile...the last whirlpool 8/8 works as it should!

^^Might switch the two, so that the stargate leads to the adventure area and later windows area (more hidden) and the water whirlpool lead to the macintosh one (less hidden)...hopefully it'll work!

Noticed black and white link doesnt have a swimming animation like the colored one, will also fix that.

^^Awesome that those dready whirlpool all work as they should. Another task that's done!

^^Anyone got any ideas what these ice rod blocks could be changed into?

I was thinking fire blocks or something, since ice breaks fire but could be something else that makes some more sense than ice blocks...destroyed by ice...! 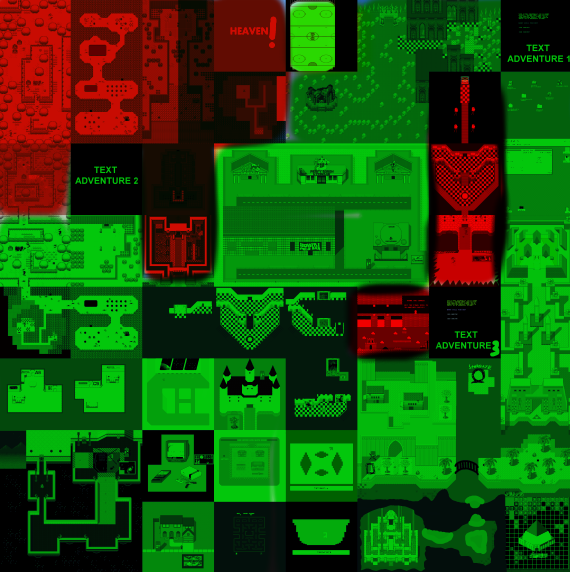 Middle right areas will be linked to the underverse.
After defeating ganon, you'll end up into those mario areas with bowser painting as the final mini dungeon and boss.

^^just a visual map for myself so I know whats left to link together.

^^Finally got around adding those castle doors!

Finishing the whole castle as we speak, it's fucking confusing with all those custom tiles in there, but I'll get it done...

3 out of 5 areas mostly done (including the exterior).

Once that's done, I'll be able to start finishing up the desert areas and restore my desert palettes (currently using the castle palette temporary to show up tiles properly in HM).

It's amazing how HM doesn't display all my areas properly

New task: Make the paintings smaller so they actually fit on walls!

Then add collisions in ganon painting area...and fix castle exterior palette...and a hundred more tasks to finish the overworlds! lol it really never ends does it?

^^We always know how women loves to control man!