Doctor Light Theme Update:
We originally released all three Mega Man X MSU-1 titles without the ability to play Doctor Light's theme. We have fixed that issue since original release of the patches. If you are a returning user of zeldix, you may find the below link useful as it has all Doctor Light Themes used in all the PCM sets in one collection.

howdy fellas, I'm DMB and I'd like to share a pcm pack I made sometime ago
https://youtu.be/tY2ROsvYJt0
It contains musics from megaman maverick hunter X and some custom ones since maverick X doesnt have a password screen for example.
Dr. Light's theme is also included

Hi and welcome to this forum

feel free to send a link to your pcm files and I add it to the original post.

Dark Mario Bros wrote:howdy fellas, I'm DMB and I'd like to share a pcm pack I made sometime ago
https://youtu.be/tY2ROsvYJt0
It contains musics from megaman maverick hunter X and some custom ones since maverick X doesnt have a password screen for example.
Dr. Light's theme is also included

Just a heads up, google is really bad at flagging megaman stuff. I noticed on your youtube page the download link is through google drive. I once had a link for all 3 megaman x games get taken down from google drives. Not only that but it eventually lead to my account being deleted once it flagged my super metroid PCM as well. I would suggest using a different download service to post your Megaman X PCM tracks as google will most likely take it down eventually. So far mega.nz has been good for me and free. Just giving a fair warning.

Uh, didn't notice the link, I updated first post with this new set. Yes google drive became somewhat shitty in the past for hosting pcm sets

I see... I'll try upload it somewhere else whenever I get the chance to do it,
at the moment I can't due not having a decent internet with me to upload stuff.

Dark Mario Bros wrote:I see... I'll try upload it somewhere else whenever I get the chance to do it,
at the moment I can't due not having a decent internet with me to upload stuff.

I went a little over a year before my link got removed, you will be good for a bit.

btw, one thing I think it was important to mention (idk if someone said it before but anyway), the boss introduction theme should be looped, cuz when it's on the dialog with sigma when he has the robot dog along side with him, the song goes to an awkward silence due not being looped

Even if this request is valid, I don't touch the patches ever again (only for severe bugs, but surely not for further nitpicks).
It shouldn't sound harsh, but see the work: all 4 versions we offer must be adjusted (1.0,1.1, j and us), 2 her-saki and 1 sa1. This can introduce more bugs through mispatching, simply by mixing up the one or other thing.

Furthermore all pcm packs need to be readjusted, and also rehosted. Hell no

If you like I can give you the hex address to where to change the track into loop, so you can edit your rom (and pcm!) yourself. All I'd need is the track number.

the song in question is number 30 according the MSU1 track map
also, I've thought ahead and made it looped in my pcm pack cuz I thought it was an error of the patch in some way, but I guess it was just a small slip tho.
I think it would be important to people know how to change it . I know how troublesome it can be, I'm no asm master myself but I know how much headache it can give (I say that cuz I dont code asm stuff, I just port musics for Super Mario World hacks)

ok, for unheadered rom (should work on all versions), open the rom in a hex editor, press ctrl+g and type 0x7c6b

A friend of mine asked me for a MSU-1 set of this title with songs from "The Covers Duo". I know that there's a lot of sets here (I don't even downloaded them all), but since It's done, I would like to share.

daniloroxette wrote:A friend of mine asked me for a MSU-1 set of this title with songs from "The Covers Duo". I know that there's a lot of sets here (I don't even downloaded them all), but since It's done, I would like to share.

These guys are really good. I actually thought maybe one day i would make PCM set but have too much i am working on right now. Im kind of excited someone else did this so i can take it off the list of things i want to do. I will download this for sure. This is my most played game and i am always up for a new soundtrack, thank you.

Using the SA-1 merged patch with the relocalization patch that has the changed Mega Man logo will render the X to not show during the animation of the title.  Right before it's supposed to show it freezes but the music still plays.  The demo won't play either, but pressing Start will have it go to the main menu.  I did find out it was the SA-1 portion of the patch that causes the issue as I tried the standalone SA-1 patch with the relocalization patch and the same thing happened.  Just wanted to let everyone know even though it's not an MSU-1 problem.

Yes, if you mix multiple patches, bugs are usually the gain. It is impossible to make every patch compatible with every other patch since the code overlaps and overwrite each other in the freespace areas. You could try to change the patch order, means first recolization, then sa1, or way round.

Ya, I know not every patch works together.  I was more or less giving a heads-up.  I know I can't switch the order of the merged patch as it's a .bps instead an .ips.  I'll try to contact them, but if it doesn't, or impossible, to fix, then that's that.  I would like it to all fit together, but I'll take what I can get.  Just like when I make cover art, sometimes I'm not able to do what I'd like to do.

Edit #1: Patching the relocalization first fixes the problem.  So, unless the merged patch can have an .ips option, the minor issue will still be there.

Edit #2: I found a way to do it.  After patching the relocalization logo patch to the rom, use the beat utility to patch the merged patch to the rom.  A message will pop up saying, "Patch application has failed!", but the new rom will have been created.

Hey, I made some awesome updates to my PCM set:

I change the Central Highway, Sting Chameleon, Sigma Stage 1, and Sigma Stage 2. I also change how I edited the tracks for Storm Eagle and Spark Mandrill Stage and how they loop as well. I also have some other minor track changes like the themes for password screen and before the boss approaches theme.

Hope you enjoy! This is my all time favorite game and I put a ton of love into this album, I think you will really enjoy it!

Updated, as always much thanks

Hey guys, these all look great but I have an issue. I am trying to apply the SA1 patch with any of these MSU1 patches but whenever I try to run the game on my SD2SNES, I just get the regular old music. I downloaded the merged SA1 bps file, applied it to an MMX 1.0 rom, downloaded the Megaman X guitar MSU1 and then threw them all in a folder and dropped onto my sdcard. Am I missing something or doing something wrong? 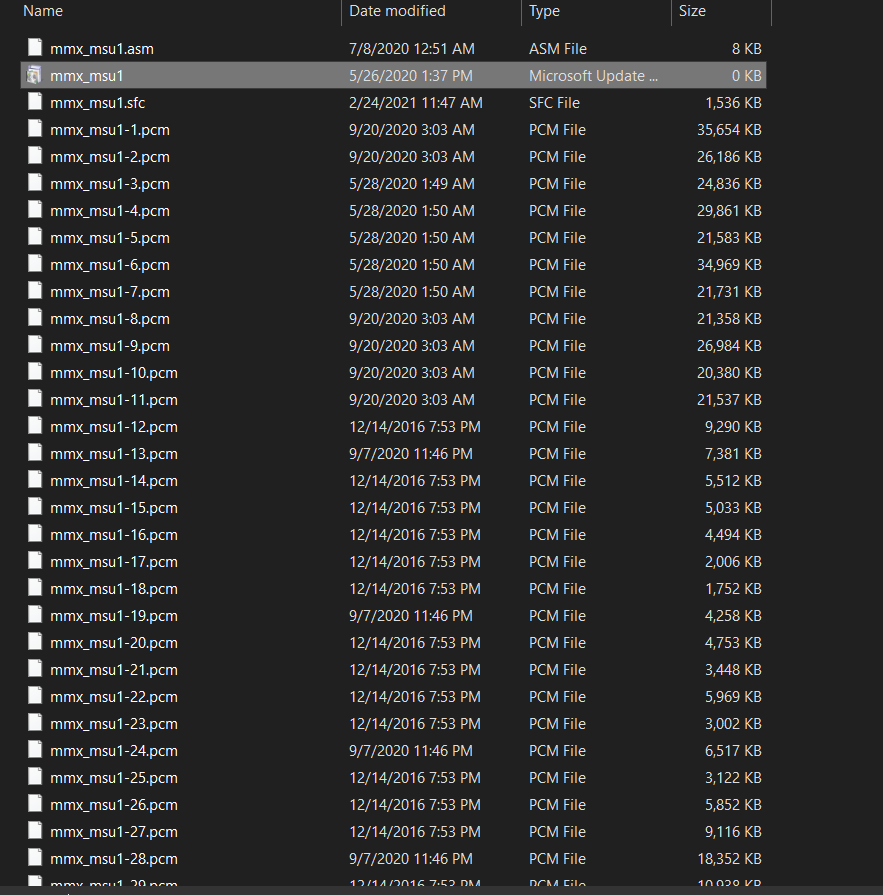 Your 0kb msu file doesn't seem to have an .msu extension.
Make sure it has, mmx_msu1.msu

It probably does as it has "Microsoft Update Standalone Package" as the file type. The extension is hidden as it's a known OS file type, whereas the others aren't.

I'm checking it on SD2SNES now.

It's working fine here. The only issue I can think of is that you have the original SD2SNES. SA-1 + MSU1 is not possible on that version. It's only possible on the Pro version.

Relikk wrote:It's working fine here. The only issue I can think of is that you have the original SD2SNES. SA-1 + MSU1 is not possible on that version. It's only possible on the Pro version.

I also have the normal SD2SNES,
(Review F if my memory serves me correctly)
the MSU1 + SA1 games do not work in the same and such,
I can't wait to buy FX PAK PRO !!!